Suspect falls to death from atop crane at Los Angeles port 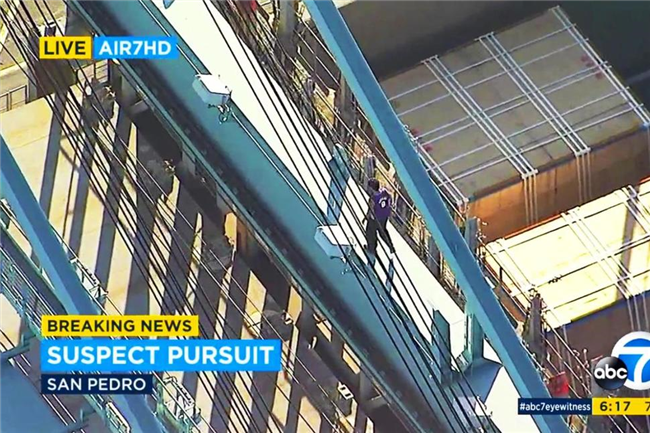 This frame from video provided by KABC-TV shows a man atop a container loading crane at the Port of Los Angeles, where he climbed after an hours-long high-speed police pursuit of his vehicle in Los Angeles, Wednesday, Aug. 16, 2017. The man left his car, climbed to the top of the crane and was sitting there as darkness approached.

A suspected car thief led police on a chase across Los Angeles before he ditched the vehicle and climbed to the top of a loading crane at the city's port, dangling over edges and stripping naked before falling to his death.

The man fell about 160 feet to the ground and died about three hours after he first scaled the crane Wednesday night. It's not clear whether he slipped or jumped deliberately, Los Angeles fire officials said.

Police in Los Angeles spotted the car reported stolen from a dealership in San Bernardino, and an hours-long chase ensued, the LAPD said.

He drove into the vast complex of the Port of Los Angeles and drove into a terminal, circling back and forth under giant loading cranes and next to a docked ship before jumping out of the still-moving SUV and racing up the stairs of the crane. He broke a window and climbed into the crane cab, then climbed out, walked to the end of the crane over water as darkness fell.

Port workers stopped their labor and watched the scene, some with binoculars.

Police waited below for him for hours, worried that if they approached he might slip or jump.

As news helicopters hovered above, he shed his Lakers jersey and shoes, then later took off the rest of his clothes. He dangled and nearly fell several times before eventually plunging to the ground.

"Our officers were nowhere near to close proximity of the suspect at the time that he fell," Detective Meghan Aguilar said.

The man's name has not been released.

Eric Nosser, a salesman at the Subaru dealership the SUV was stolen from, says he steered clear of the man.

"I let him be, because he seemed on edge," Nosser told KNBC-TV. "I figured he'd just kind of walk off and go about his business."

Instead the man found an SUV with the keys in it, got inside and took off.