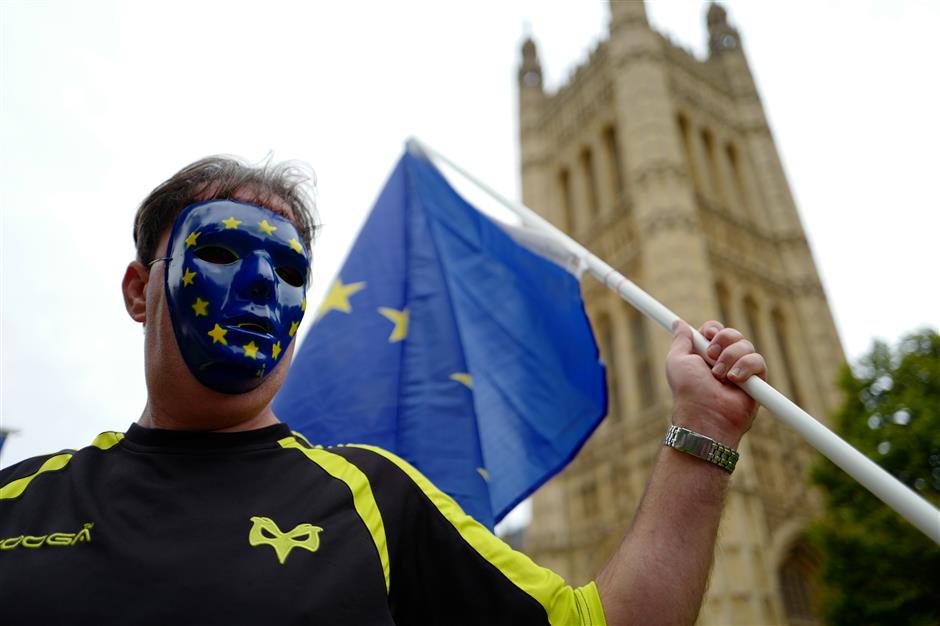 Pro-EU demonstrators protest against Brexit outside the Houses of Parliament in London on September 7, 2017 as lawmakers debate the European Union Withdrawl Bill in the House of Commons.

British Prime Minister Theresa May called on parliament today to support legislation to sever political, financial and legal ties with the European Union, a step toward Brexit the opposition says it will challenge.

The repeal bill, or EU withdrawal bill, is central to the government’s plan to exit the bloc in 2019, untangling Britain from more than 40 years of EU lawmaking and repealing the treaty that first made Britain a member in 1972.

Parliament today started debating the “main principles” of the bill, which seeks largely to copy and paste EU law into UK legislation.

Lawmakers will vote on Monday on whether the bill can move on to the next part of its long legislative journey, when it could be amended.

Its safe passage through parliament is especially important for a government that has been criticized in Brussels over its Brexit strategy and after a series of leaks, including one of a letter to big companies asking them to endorse Britain’s plans.

“The repeal bill helps deliver the outcome the British people voted for by ending the role of the EU in UK law, but it’s also the single most important step we can take to prevent a cliff edge for people and businesses, because it provides legal certainty,” May said.

“We’ve made time for proper parliamentary scrutiny of Brexit legislation,” she said.

Her Brexit minister, David Davis, also urged lawmakers to speak out if they felt that any rights were not carried forward into British law by the bill. He was throwing a challenge to the main opposition Labor Party that has said it cannot support the legislation without it being amended to better protect workers’ rights.

With Brexit negotiations with the EU faltering, Monday’s vote will be a test of May’s deal with a small Northern Irish Party to shore up the majority she lost in a June election she did not have to call.

Labor would need to convince EU supporters in May’s Conservatives to side with them to vote down the bill, but some more vocal pro-EU Conservative lawmakers have now said they will vote with the government after asking for reassurance that parliament will be able to scrutinize any changes to the law.