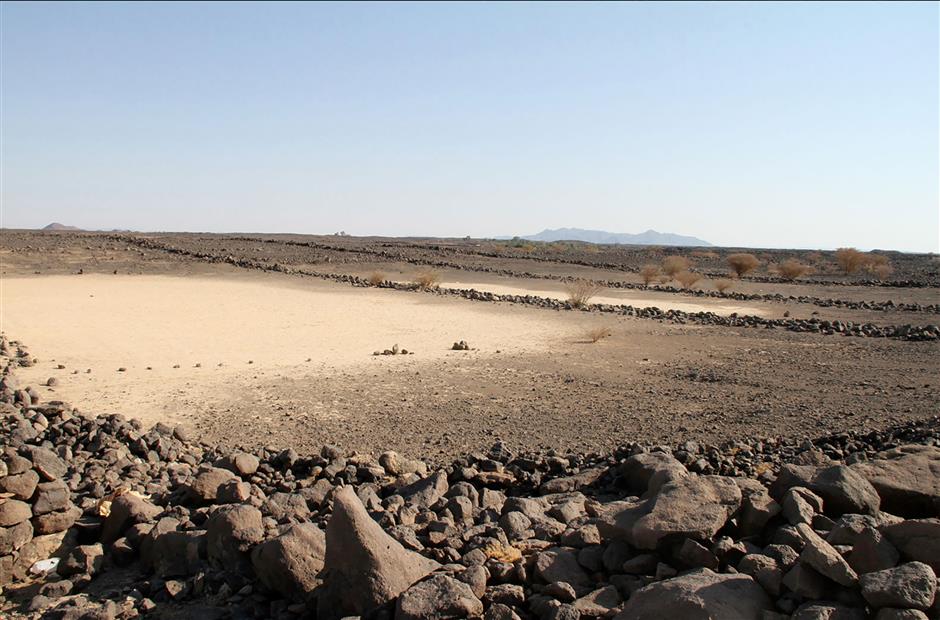 This undated handout picture released by the University of Western Australia shows the mysterious ancient structures built from stone in undisclosed locations across the desert in Saudi Arabia. Nearly 400 mysterious ancient stone structures known as "Gates" have been identified in the Saudi Arabian desert by an Australian researcher using Google Earth.

Nearly 400 mysterious ancient stone structures have been identified in the Saudi Arabian desert by an Australian researcher using Google Earth.

David Kennedy, whose team has spent decades recording thousands of archaeological sites in the Middle East, said the man-made edifices, known as “gates,” are thought to have been constructed between 2,000 and 9,000 years ago.

But their purpose and function are a mystery.

“You can’t see them in any intelligible way at the ground level but once you get up a few hundred feet, or with a satellite even higher, they stand out beautifully,” the University of Western Australia academic said in a statement on Wednesday.

Kennedy said he was baffled when he first saw the remote and inhospitable site, in the lava fields of an ancient volcano, on satellite images, despite some 40 years working in the region.

“I refer to them as Gates because when you view them from above they look like a simple field gate lying flat, two upright posts on the sides, connected by one or more long bars,” he said.

“They don’t look like structures where people would have lived nor do they look like animal traps or for disposing of dead bodies. It’s a mystery as to what their purpose would have been.”

His findings are described in a paper published next month in the journal Arabian Archaeology and Epigraphy.

He said not much was known about the people who built them, but they were believed to be ancestors of the modern Bedouin.

Their discovery came about by chance after a Saudi doctor who was interested in the area’s history contacted him, having heard about his work in Jordan.

“He said ‘I’m interested in the heritage of my country, I’ve spotted on Google Earth that there are some rather strange structures in the lava fields,’” Kennedy told broadcaster ABC.

“He sent the coordinates of them to me and I had a look and I was bowled over by them.”

Kennedy, a founding director of the Endangered Archaeology in the Middle East and North Africa project, specializes in aerial archaeology.

Since 1997, he and his team have photographed tens of thousands of stone-built structures, mostly in Jordan, ranging from giant circles to animal traps and funerary monuments.