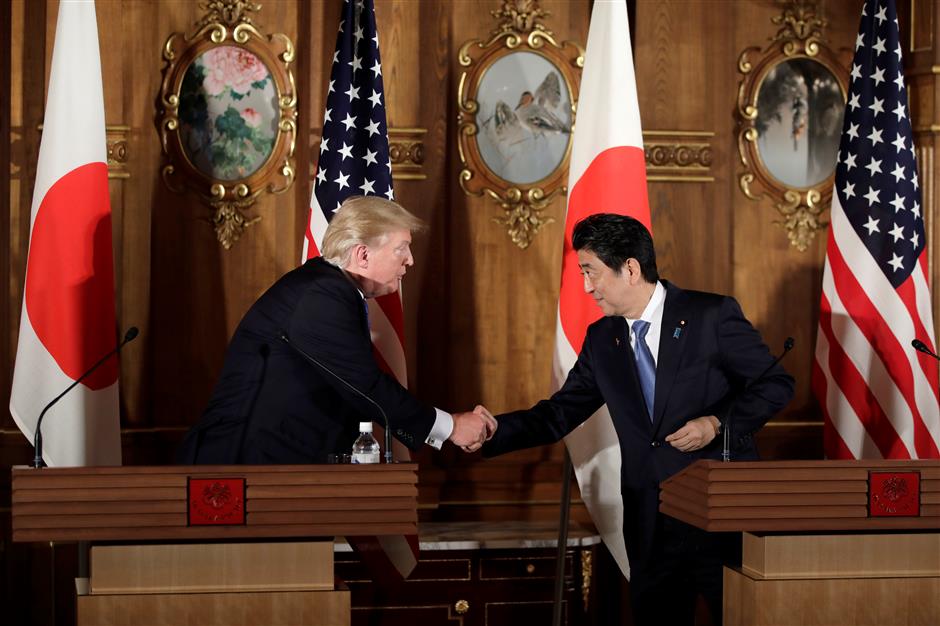 Visiting US President Donald Trump took aim at Japan on Monday for what he described as one-sided trade deals with the United States.

Trump made the remarks at a consortium of US and Japanese business leaders ahead of his summit meeting with Japanese Prime Minister Shinzo Abe in the afternoon.

"Japan has been winning on trade in recent decades," Trump said, adding that he wanted to push for more reciprocal trade between the two countries in a friendly way.

Japan had a US$69 billion trade surplus with the United States last year, according to the U.S. Treasury Department.

"The United States has suffered massive trade deficits with Japan for many, many years, almost US$70 billion annually," Trump told the business leaders at the US ambassador's residence in Tokyo.

"We want fair and open trade, but right now our trade with Japan is not fair and it's not open," he said. "But I know it will be soon."

During his election campaign, Trump highlighted Japan for its currency and trade policies, and had previously accused Japan of manipulating its currency.

A weak yen is a boon for exporters here as it boosts firms' competitiveness in overseas markets and augments profit margins when yields are repatriated.

"Japan's No. 1 priority is still keeping the US from talking about foreign exchange," Yuichi Kodama, chief economist at Meiji Yasuda Life Insurance Co. in Tokyo was quoted as saying on the matter.

Political watchers believed that Abe would once again sound out Trump and the United States about rejoining the Trans-Pacific Partnership (TPP) trade deal.

Abe and his backers would far prefer this framework which allows them more negotiating rights and the potential to protect Japan's ultra-sensitive trade sectors here, but sources close to the matter have said that Trump is eyeing bilateral deals.

To this end, Trump dismissed the TPP idea again, having pulled the United States out of the pact soon after his inauguration in January, saying on Monday the (TPP) free trade agreement "was not the right idea."

On other matters pertinent to the two countries and the region, Trump said of his talks with Abe, "We are in the midst of having very major discussions on many subjects."

Following his arrival in Japan on Sunday and during his address to US troops at a base near Tokyo, Trump stressed the importance of US-Japan ties and said that the American resolve should never be underestimated.

Trump and first lady Melania Trump wrapped up their first day in Japan with Abe and his wife Akie Abe at a high-class restaurant in Tokyo, with Trump again underscoring the significance of his first visit to Japan.

Trump and first lady Melania also had an audience with Japan's Emperor Akihito and Empress Michiko at the Imperial Palace on Monday.