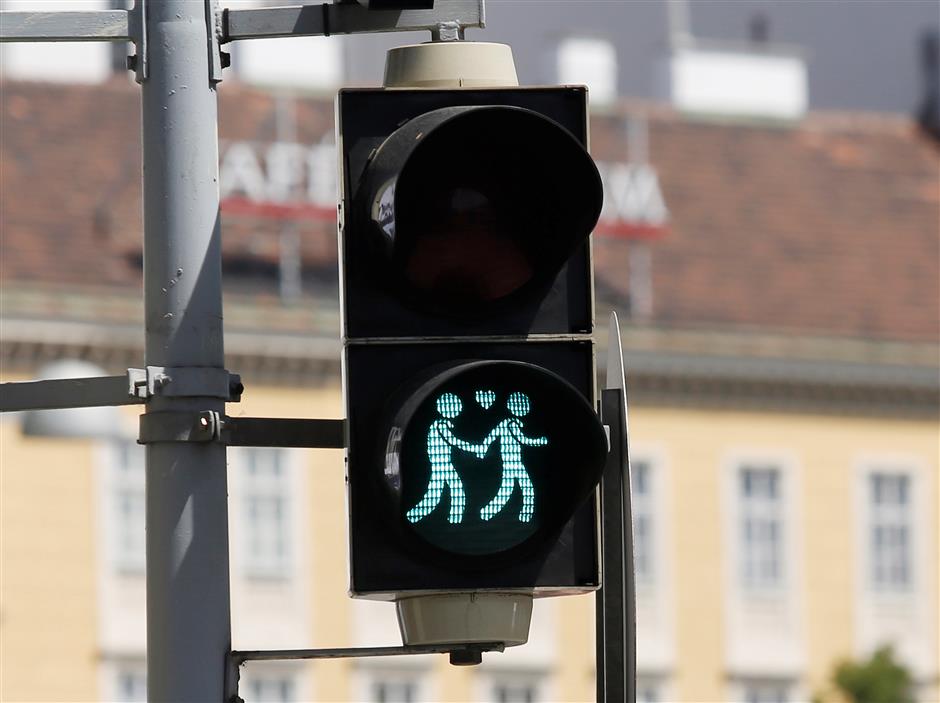 This file photo taken on May 12, 2015 shows a traffic light, showing a same-sex couple, in Vienna. Austria's top court said on December 5, 2017 that it has ruled that same-sex couples can marry, bringing the Alpine country into line with more than a dozen other European nations.

Austria’s Constitutional Court has ruled that same-sex couples will be allowed to marry by the start of 2019, bringing the country in line with more than a dozen other western European nations.

The court said in its ruling on Tuesday that the words “two people of different sex” would be removed from the law on marriage at the end of next year on the grounds that the distinction was discriminatory.

Same-sex couples will be able to marry after that, unless the government decides to change the laws earlier.

Same-sex couples in Austria, a predominantly Roman Catholic nation of 8.7 million people, have been allowed to enter civil partnerships since 2010. But they have not been able to marry.

The Constitutional Court took up the issue after a complaint from two women who were already in a civil partnership but were refused permission to enter a formal marriage by authorities in Vienna.

The court said civil partnerships would remain an option after the law was changed, and would then also be open to straight couples. It noted in its ruling that marriage and civil partnerships had become increasingly similar in a legal sense in recent years, with same-sex couples allowed to adopt children.

The court said “the distinction between marriage and civil partnership can no longer be maintained today without discriminating against same-sex couples,” adding that keeping the two institutions separate suggested that “people with same-sex sexual orientation are not equal to people with heterosexual orientation.”

Gay marriage has already been legalized in 15 countries in western Europe, including in Germany, which until this year was the biggest holdout. A similar number of other European countries have some sort of same-sex unions or civil partnerships.

Helmut Graupner, a lawyer for the two women who brought the case, said “today is a truly historic day.” He said the Austrian court was the first in Europe to reject a marriage ban for same-sex couples, while other countries legalized gay marriage through political means.