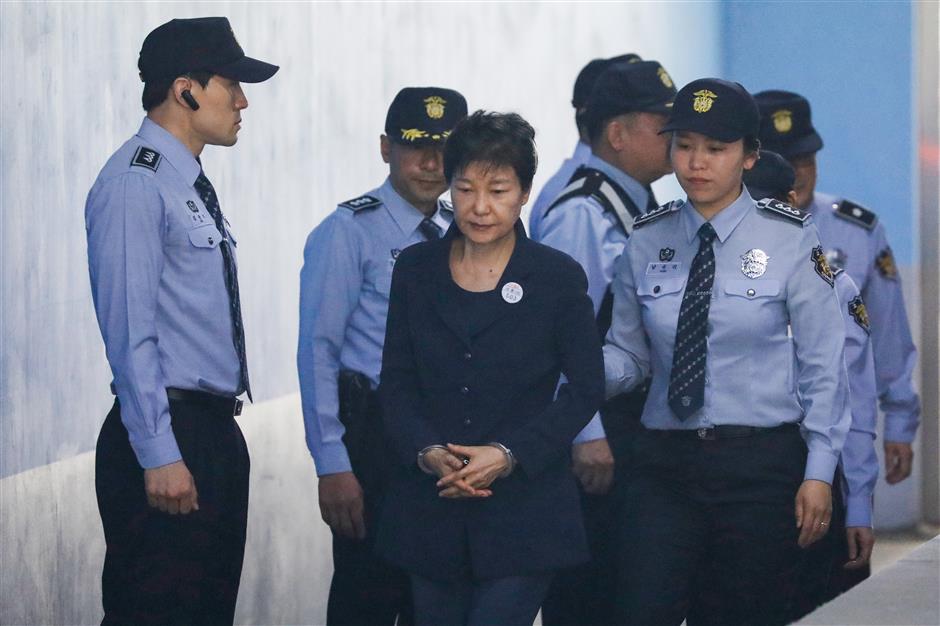 In this file photo taken on May 23, 2017 South Korean ousted leader Park Geun-hye arrives at a court in Seoul.

South Korea's disgraced former president Park Geun-hye was jailed for 24 years Friday for corruption, closing out a dramatic fall from grace for the country's first woman leader who became a figure of public fury and ridicule.

The sentence followed a trial lasting more than 10 months which ended with Park being found guilty on multiple criminal charges, including bribery and abuse of power.

"The amount of bribery the accused received or demanded in collaboration with Choi amounts to more than 23 billion won (US$21.7 million)," Judge Kim Se-Yoon said, referring to Park's secret confidante and long-time friend Choi Soon-sil.

"I sentence the accused to 24 years in prison and 18 billion won in fines."

Park, 66, had boycotted most of the trial in protest at being held in custody. She was not present in court for Friday's judgement which, in a rare move, was broadcast live on television.

The daughter of assassinated Park Chung-hee, Park took office in 2013 as a conservative icon who cast herself in the role of daughter of the nation – incorruptible and beholden to none.

Less than four years later, she was impeached, stripped of all her powers and ousted from office on the back of months-long mass protests that brought millions onto the streets of Seoul and other cities.

The trigger was a snowballing graft scandal involving Park and Choi and accusations of graft, influence-peddling and taking bribes from corporate bigwigs in exchange for policy favours.

Much of the public anger was focused on Park's relationship with Choi and accusations that she let her childhood friend – who held no formal position or security clearance – meddle in state affairs, including high-level appointments and editing official speeches.

Choi is the daughter of a shadowy religious figure who had served as a mentor to Park for decades until his death in 1994. She was tried separately and sentenced in February to 20 years in prison.

Condemned in the media for her "Rasputin-like" influence over Park, Choi was convicted of using her presidential ties to squeeze tens of millions of dollars out of major South Korean businesses, including Samsung – the world's top smartphone maker – and retail giant Lotte.

The scandal reignited public criticism in South Korea of the cosy and often corrupt ties between top officials and the powerful, family-run conglomerates – called "chaebol" – that dominate the world's 11th-largest economy.

Park becomes the third former South Korean leader to be convicted on criminal charges after leaving office, joining Chun Doo-whan and Roh Tae-woo, who were both found guilty of treason and corruption in the 1990s.

Park's presidential predecessor Lee Myung-bak is currently in custody as prosecutors investigate multiple corruption charges involving him and his relatives.

Chun and Roh received presidential pardons after each spent around two years in jail – a privilege that may elude Park for many years, said Jeong Han-wool, an analyst at the Seoul Hankook Research think-tank.

"Park has denied all charges against her and expressed no remorse or atonement – legally as well as politically – for what's probably the most shocking political scandal in our modern history," Jeong said.

"Given her attitude and public anger over her scandal that remains raw, it will be difficult to create a political environment in favour of her release anytime soon."

Park's left-leaning successor, Moon Jae-in, came to power largely because of the public backlash against her and her conservative party, dimming hopes for a pardon under the current administration, he added.

There is some residual sympathy for Park among her core supporters, who have always seen her as a heroically tragic figure who lost both her parents to assassins and devoted her life to the service of her country.

The fact that she never married or had children was part of her appeal, given the nepotistic tendencies of many senior officials.

"I'm married to the Republic of Korea. I have no children. South Koreans are my family," she once declared.

But for the vast majority of Koreans, she has now been permanently disowned, and will go down in history not as the country's first woman president but the first democratically elected leader to be forced from office.