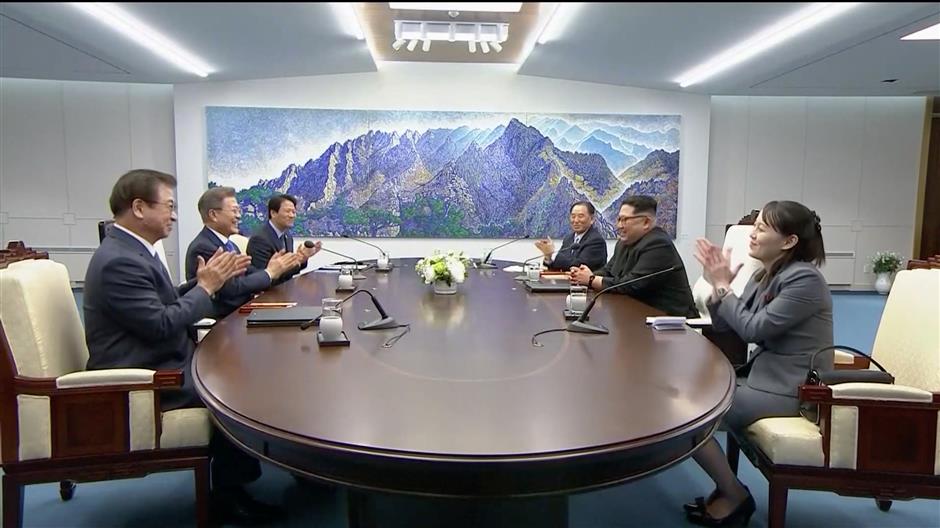 South Korean President Moon Jae-in and top leader of the Democratic People's Republic of Korea Kim Jong Un began formal talks on Friday morning in the South Korean side of the border village of Panmunjom in the third-ever inter-Korea summit.

After attending an official welcoming ceremony which included an inspection of a South Korean honor guard, the two leaders launched talks on peace and prosperity of the Korean Peninsula at a conference room on the second floor of the Peace House, a South Korean building inside Panmunjom dividing the two Koreas.

Kim made history by becoming the first DPRK leader to step onto South Korean soil since the end of the 1950-53 Korean War.

Standing on the two sides of the military demarcation line, marked only by a low concrete slab, Moon and Kim shook hands with beaming smiles on their faces for their first meeting.

The previous two inter-Korea summits took place in the DPRK capital of Pyongyang in 2000 and 2007, respectively.

After walking across the MDL into the South Korean side, Kim invited Moon to briefly cross the border into the DPRK side.

They returned to the South Korean side of Panmunjom grasping hands with each other, marking a historic moment for the first inter-Korea summit in more than a decade.

The DPRK leader told his South Korean counterpart in his introductory remarks for the morning talks that it was time to "write a new history" in inter-Korean relations and also for peace and prosperity.

Before the start of talks, Kim wrote in the guestbook that "a new history begins now" and "an age of peace, at the starting point of history," according to the inter-Korea summit joint press corps.

Kim told Moon that he hoped to create a good result by frankly discussing issues of mutual interest and not making proposals which the two sides will not be able to enforce.

In response, Moon suggested they "engage in frank talks and reach a bold agreement" as a gift to the whole Korean people and the people who want peace.

Moon praised Kim for his decision to cross the border into the South Korean side, saying Panmunjom has changed into a symbol of peace from a symbol of division at the moment Kim walked over the MDL for the first time.