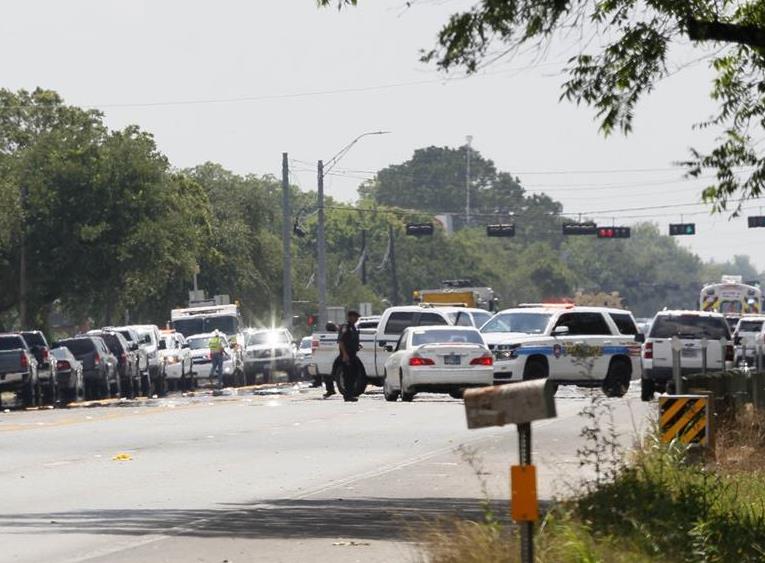 Police cars are seen around Santa Fe High School in Texas, the United States, on May 18, 2018.

Ten people were killed and another 10 wounded on Friday when a student armed with a shotgun and a revolver opened fire at a high school in the US state of Texas in the latest incident of gun violence against students.

Texas Governor Greg Abbott confirmed the number of victims at Santa Fe High School, southeast of Houston, and called the shooting "one of the most heinous attacks" that we've ever seen in the history of Texas schools.

During a press briefing near the high school, Abbott said, "It is with a very heavy heart that I can confirm that as of this time, there have been 10 lives that have been lost and another 10 that have been wounded."

"We grieve for the victims who lost their lives at Santa Fe High School and we pray for the families who are suffering and will continue to suffer in the days to come," he added.

The governor described the shooting as "one of the hideous attacks" that has ever happened in the history of Texas schools, a place of learning where parents should be able to send their children without fear for their children's safety.

Identifying two goals going forward, Abbott said the immediate goal is to "ensure this crime is going to be prosecuted appropriately while also work to ensure that we provide the families, the victims and all the children in the schools the support and resources and counselling they need."

The second goal, Abbott said, is to "take action to step up and make sure this tragedy is never repeated ever again in the history of state of Texas."

Santa Fe student Logan Roberds told Xinhua that he was at the back of the school building when the shooting happened.

"Hearing those gunshots, my heart was racing. It was just very very terrifying, very scary. I was at the back of the school and teacher told us to run. So I end up running," the student told Xinhua.

The boy said he remembered there were three gunshots before they were told to run by the teachers. "There is no if or but or anything, we had to leave."

Terrifying and scary were the only words he can think of to describe his experience.

"I'm saying scary a lot, because it was. You never know the shooter could come outside where we were and could probably shot us," he said.

Roberds said he had some friends who were close to the encounter and police safely got them out.

Abbott said Pagourtzis gave himself up to the police without the courage of committing suicide which he planned to do.

In his journals and computer, the suspect said he wanted to commit the shooting and then suicide. The suspect is currently at the Santa Fe Police Department, police said.

The governor also confirmed that two weapons were used in the attack, a shotgun and a .38 revolver. Both weapons are legally owned by the suspect's father. There is no information whether the father is aware that the son took the weapons.

Abbott said different kinds of explosive devices were detected in a home and in a vehicle of the shooter. Several law enforcement agencies are working together to analyze the explosives.

Earlier in the day, an unnamed Santa Fe police officer told reporters the suspect shooter was in custody and another person was detained and questioned. "Both of them are students," he said.

The officer urged local residents to stay alarmed and call 911 when seeing something suspicious.

Local police also confirmed that a Santa Fe Independent School District officer was injured in the shooting and was under surgery with critical condition.

Several ambulances, including a mass casualty ambulance, along with multiple Life Flight helicopters, were seen at the site. Multiple victims were transported to a nearby hospital, some of them in critical condition.

Interviewed by media, several students said they had been trained what to do when a shooting happens, but never thought a real shooting would happen.

Santa Fe High School is located in Galveston County, about 54 km southeast of downtown Houston. There are about 1,400 students in the high school. Santa Fe is a city with a population of about 13,000.

The school was on lockdown Friday.

The county is about 360 km east of Sutherland Springs, Texas, where a gunman barged into a church last November and murdered 26 people.

According to tracking website Gun Violence Archive, 5,414 people were shot dead so far in 2018 in the United States and 9,819 people were wounded. There are altogether 21,804 shooting incidents in the country this year.