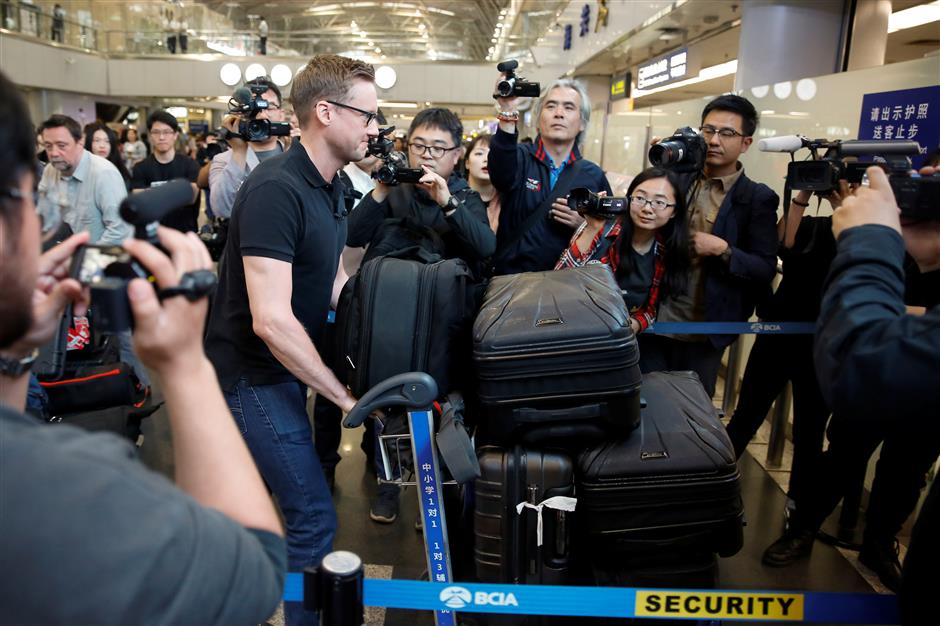 CNN's Will Ripley arrives at Beijing airport to board a plane to DPRK in Beijing, China, on May 22, 2018.

South Korea on Tuesday expressed regrets over the failed visit by its journalists to cover the Democratic People's Republic of Korea's planned dismantlement of its nuclear test site ahead of the summit between Pyongyang and Washington.

Pyongyang had invited journalists from China, Russia, the United States, Britain and South Korea earlier this month to witness the dismantlement of the Punggye-ri nuclear test site, where all of its six nuclear tests were conducted, scheduled between May 23 and May 25.

The DPRK has refused to receive the list of South Korean journalists supposed to participate in the coverage, citing the ongoing South Korea-US air combat exercises codenamed Max Thunder.

The annual air drills, which South Korea claimed to be defensive in nature, mobilized about 100 aircraft this year, which included eight F-22 Raptor stealth fighter jets of the US Air Force. The radar-evading combat plane is used to secretly attack an enemy target.

The South Korean unification minister said the purpose of the Panmunjom Declaration is to end confrontations and hostilities of the past, while moving toward a new era of reconciliation, peace and prosperity by fulfilling all of inter-Korean agreements.

The Panmunjom Declaration was signed and announced after the summit between South Korean President Moon Jae-in and top DPRK leader Kim Jong Un, the third-ever inter-Korean summit held on April 27 in the border village of Panmunjom.

Moon and Kim agreed to complete denuclearization and the turn of the current armistice agreement into a peace treaty by the end of this year. The Korean Peninsula remains technically at war as the 1950-1953 Korean War ended with armistice.

Despite the media coverage failure, Cho said, the South Korean government paid due attention to the fact that the DPRK's pledge to dismantle the Punggye-ri nuclear test site, an initial measure for denuclearization, is proceeding as planned.

Except for South Korean journalists, other press corps were allowed to fly from Beijing to Wonsan, an east coastal city of the DPRK near the Punggye-ri nuclear test site, as scheduled.

Cho expected that such action would lead to the successful hosting of the DPRK-US summit, scheduled for June 12 in Singapore, anticipating the DPRK to take practical measures to achieve complete denuclearization and settle permanent peace on the peninsula.

Moon arrived in Washington Monday night (Washington time) to hold a summit meeting with US President Donald Trump on Tuesday, according to the presidential Blue House of South Korea.

Chung Eui-yong, top security adviser for Moon, told reporters on a flight to Washington that South Korea currently had 99.9 percent of expectations for the DPRK-US summit to be held as agreed upon though Seoul was preparing for several possibilities. Chung is accompanying Moon to Washington.

Chung said the South Korea-US summit was aimed at frankly exchanging opinions between leaders of the two countries about how to manage situations, saying the summit would be focused on talks between Moon and Trump.

Though the luncheon meeting was scheduled with secretaries of the two leaders in attendance, Moon and Trump will focus mainly on their one-on-one meeting, which is the strongest point of this summit, Chang noted.

He said Moon and Trump will frankly talk about ways to make the summit successful, to reach a significant agreement at the summit and to implement the agreement.