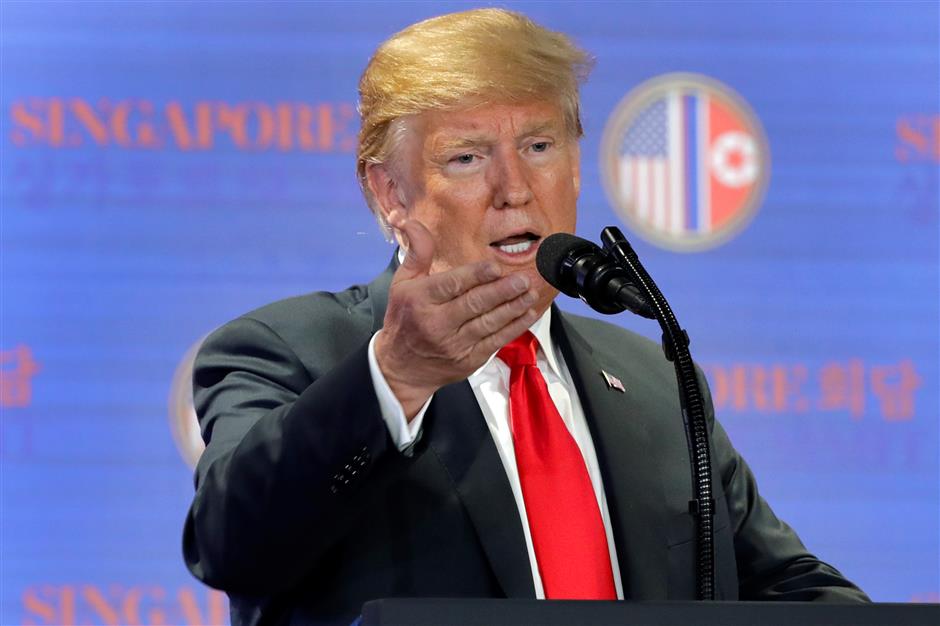 US President Donald Trump answers questions during a press conference at the Capella Hotel in Singapore's Sentosa Island on June 12, 2018.

US President Donald Trump on Tuesday expressed optimism that the denuclearization process on the Korean Peninsula would "start soon" and hopes that China could participate in the signing process of a peace treaty.

At a press conference at the Capella Hotel in Singapore's Sentosa Island on Tuesday afternoon, Trump called his meeting with Kim Jong Un, top leader of the Democratic People's Republic of Korea, "honest, direct, and productive."

"We will do it as fast as it can mechanically and physically be done," he said.

According to the president, the US side will meet next week to "go over the details." He also wants to work with China, South Korea and Japan. "China is very helpful," Trump said.

He said at present, sanctions against the DPRK remain, but he looks forward to ending the sanctions if relations progress.

As for a peace treaty in replacement of the current armistice agreement after the 1950-53 Korean War, Trump said he very much wants China to participate in its signing.

"I think it would be great to have China involved and also of course, South Korea," he said.

When asked about establishing diplomatic ties between the United States and the DPRK, the president said "hopefully soon" but it's still "a bit early for that."

Kim and Trump held the summit on Tuesday morning, and signed a joint statement at noon.

In the joint statement, the DPRK and the United States said they would commit to establishing a new relationship, and that the DPRK would work toward complete denuclearization of the Korean Peninsula.

Both sides said they are committed to jointly building a lasting and stable peace regime on the peninsula, and to recovering the remains of prisoners of war and those missing in action from the Korean War.