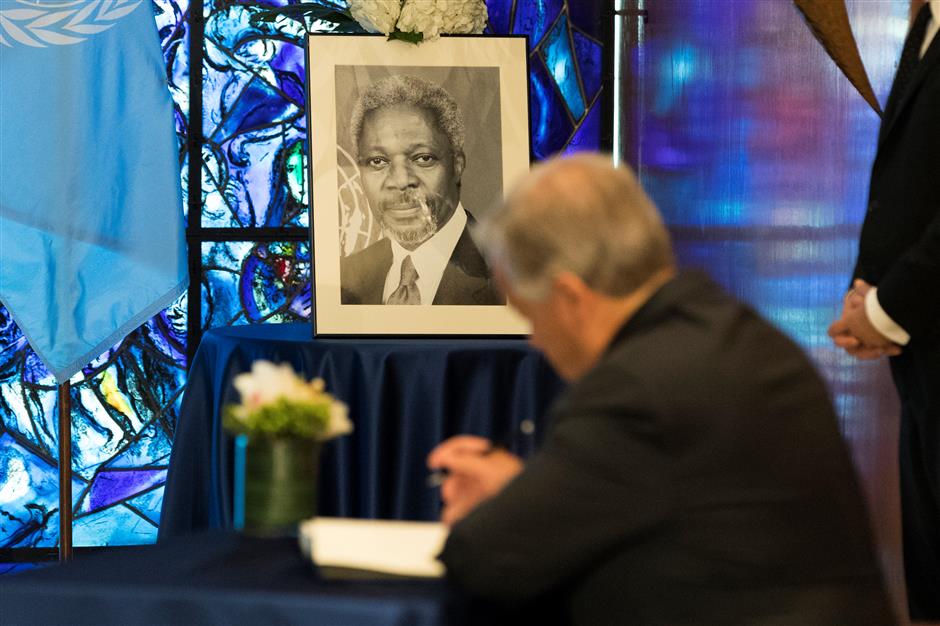 A wreath-laying ceremony was held at UN Headquarters in New York on Wednesday to mourn the death of former UN Secretary-General Kofi Annan.

Current Secretary-General Antonio Guterres paid tribute to his predecessor at the ceremony and wrote on a condolence book in memory of Annan.

"We are here to pay tribute to Kofi Annan, one of the best of us, a man who embodied United Nations values and made us all proud to call ourselves his colleagues," Guterres told the ceremony.

"Kofi Annan's years in office were an exciting time. He put forward new ideas. He brought new people into the United Nations family. He spoke passionately about our mission and our role. He created a renewed sense of possibility both inside and outside our organization about what the UN could do and could be for the world's people."

The world is still reaping the rewards of the Millennium Summit, when Annan brought the world together to agree on the first global targets on poverty and child mortality. His response to the HIV/AIDS epidemic united governments, nongovernmental organizations and the healthcare industry and undoubtedly saved many lives, said Guterres.

Annan faced up to the grave errors made by the United Nations in the 1990s -- in its response to the Rwanda genocide and the Srebrenica killings during the 1992-1995 Bosnian war. The reports he commissioned aimed to make sure such terrible mistakes are never repeated, and set the international community on a new course in its response to mass atrocities, he said.

"In these times of growing political divides and intractable conflicts, we need the peacemaking spirit of Kofi Annan more than ever," he said.

Annan's most defining features were his humanity and solidarity with those in need. He put people at the center of the work of the United Nations, and was able to turn compassion into action across the UN system.

"A true voice for the voiceless, he did not shy away from the most challenging issues but worked creatively to bridge differences and protect the most vulnerable. He stood his ground without antagonizing others; his humility, good humor, courtesy and charm went hand in hand with enormous wisdom and strength."

Besides being an extraordinary statesman, a remarkable diplomat, an inspiring leader, Annan will be remembered for his gentleness, warmth, and for his friendship, said Guterres. "He was indeed a good man and a gentleman and always at our disposal to support us, to comfort us, to be in full solidarity with us in any difficult moment that one of us, as colleagues of him, would have."

Guterres was picked by Annan as UN High Commissioner for Refugees in 2005 before he himself became UN secretary-general in 2017.

Annan, a Ghanaian diplomat and a Nobel Peace Prize laureate, died on Saturday in Switzerland, at the age of 80. He served as UN secretary-general for 10 years till the end of 2006.