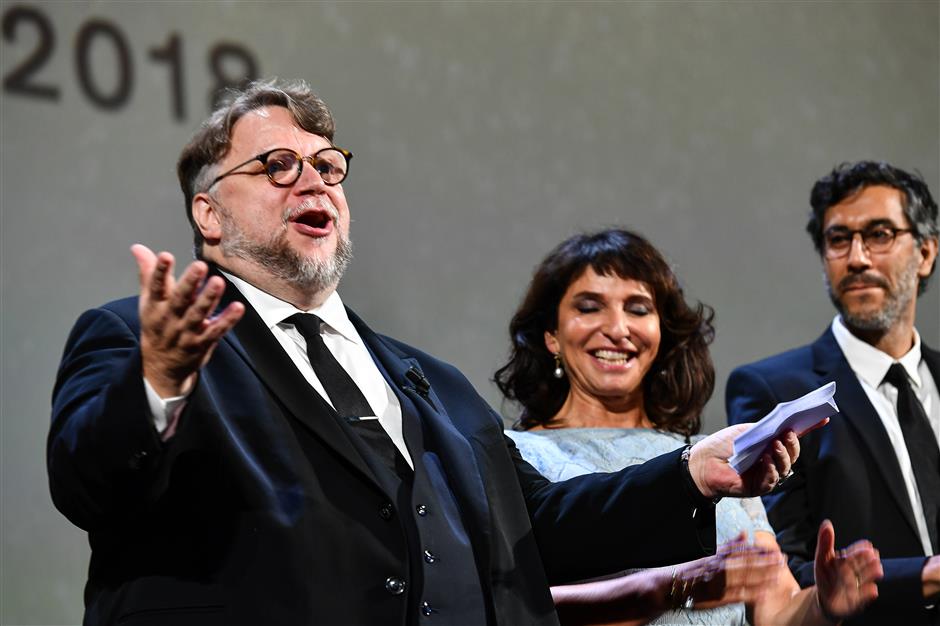 President of the Venezia 75 competition Jury, Mexican director Guillermo del Toro (L) delivers a speech during the opening ceremony, prior to the premiere of the film "First Man," presented in competition at the 75th Venice Film Festival on August 29, 2018, at Venice Lido.

The 75th annual Venice Film Festival kicked off on Wednesday in the northeastern Italian city of Venice on the lagoon with a presentation of the juries who will decide the destinies of this year's crop of cinema contenders.

The jury for the main competition is presided by Mexican director Guillermo del Toro, whose movie The Shape of Water won four Oscars including Best Director and Best Picture, as well as the top prize at Venice, or the Golden Lion.

"I hope to be surprised and to make discoveries," said Del Toro, adding that "being a juror renews the pact with cinema, a pact which goes beyond its commercial and cultural aspects -- it is a very intimate aspect."

"One way or another, you will change someone's life," said Del Toro.

The Mexican director added that he hopes the filmmaking world will become more gender-equal, with women and men represented "50-50 (percent) by 2020".

Del Toro said gender inequality in film "is a real problem, and needs to be solved at every level, with strength and resolve."

He added that he is currently producing five films, and that three of them are being directed by women.

Also on the main jury are writer and director Sylvia Chang from China's Taiwan; Danish actress Trine Dyrholm, who garnered international acclaim for her role as Velvet Underground singer Nico in Susanna Nicchiarelli's award-winning 2017 biopic; Austrian-German actor Christoph Waltz, who has a couple of Oscars under his belt for his work with Quentin Tarantino; and British film star Naomi Watts.

"I am afraid of judgment and afraid to judge," said Watts, who has received multiple Oscar nominations for her roles in memorable films such as 21 Grams by Alejandro Gonzalez Inarritu, The Ring by Gore Verbinski and Mulholland Drive by David Lynch.

"But that said, it is an incredible honor to be part of this new and unique experience. The power of cinema is such that it allows our industry to drive different cultures and allow different voices to be heard," said the actress.

"We learn so many different things through this art form, so for me it is a great privilege."

The rest of the nine-member jury is made up of French actress and director Nicole Garcia, Italian director Paolo Genovese, Polish director Malgorzata Szumowska, and New Zealand director Taika Waititi.

Together, they will award the Golden Lion for Best Film, the Silver Lion for Best Director, the Coppa Volpi for Best Actor and Best Actress, plus a Best Screenplay Award, a Special Jury Prize, and an award for Best New Young Actor or Actress.

Also unveiled today was the jury for the Orizzonti (Horizons) section, which explores the latest esthetic trends in international cinema and where Chinese writer-director Pema Tseden will be vying for the top prize with his movie Jinpa.

The festival runs through September 8.