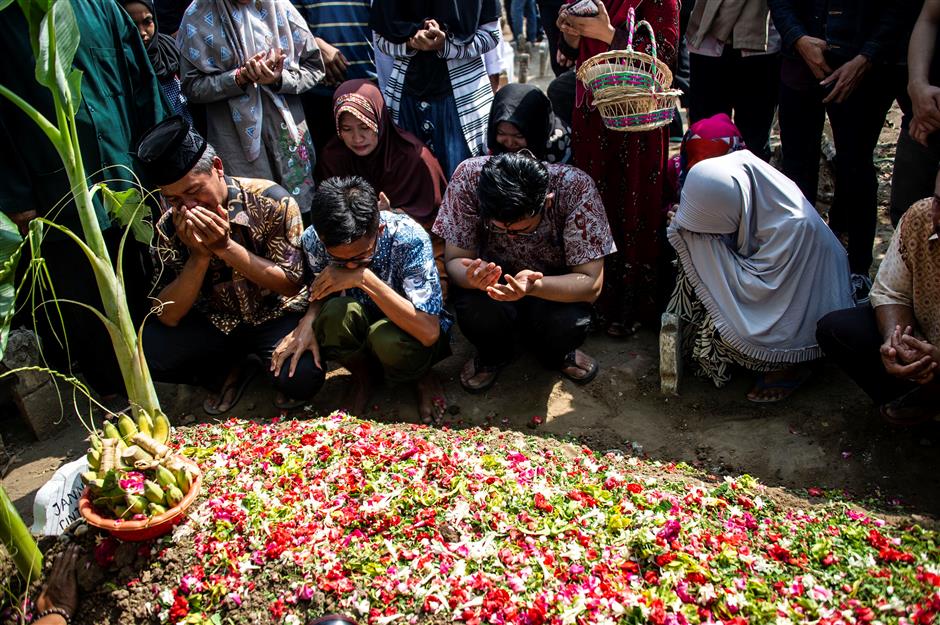 Family members mourn next to the grave of Jannatun Cintya Dewi, who was a passenger on the ill-fated Lion Air flight JT 610 which crashed on October 29, during her funeral in Sidiarjo in East Java province on November 1, 2018.

A black box of Lion Air plane that went down in waters off West Java province of Indonesia on Monday was retrieved by a diver on Thursday, a transport ministry senior official said.

"Based on initial information, yes, it has been found," Spokesman of the Transport Ministry Baitul Ihwan told Xinhua via phone when asked whether the black box has been retrieved.

The spokesman failed to give further details whether it was a flight data recorder or a cockpit voice recorder of the almost new Boeing 737 Max 8 jet plane that crashed into the waters of Tanjung Karawang shortly after taking off from Soekarno-Hatta airport in Banten province.

Head of the national search and rescue office Muhammad Syaugi said that the newly found orange device still has another part that will be searched further by the joint team that he leads.

The device is a flight data recorder, said an official of Transport Safety Committee.

"This is a flight data recorder," he said after Syaugi handed over the box to him who represents the committee.

Syaugi said that the finding was located at about 500 meters northwest of the coordinate where the aircraft Flight JT 610 last communicated with the air traffic controller.

Search for the cockpit data recorder, the other part of the device and the fuselage persists, albeit a very strong current underwater hampers the mission, he said.

All the 189 people on board may have been dead, the official said.