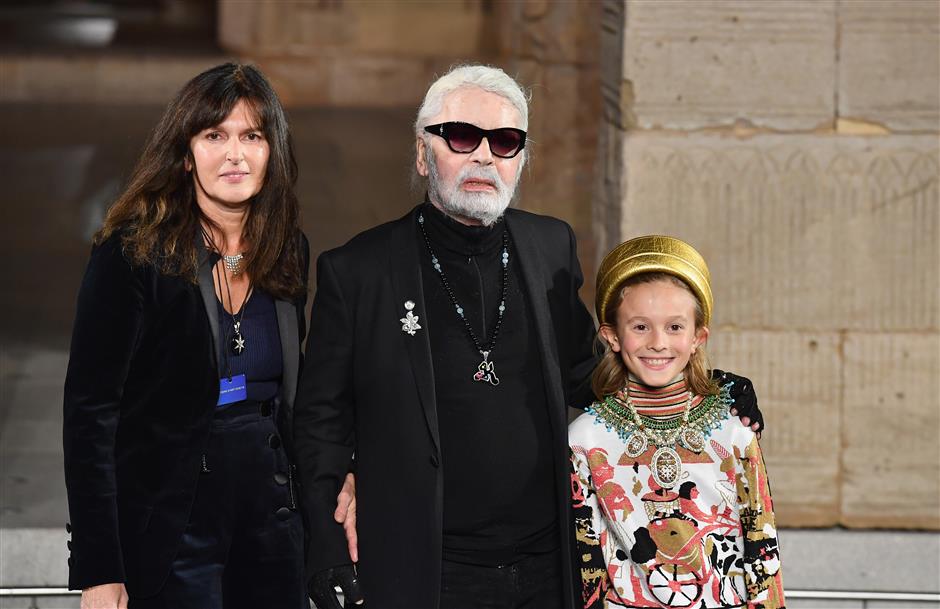 In this file photo taken on December 4, 2018, German fashion designer Karl Lagerfeld (C) walks the runway with fashion studio director of Chanel Virginie Viard (L) and his godson Hudson Kroenig during the Chanel Metiers D'Art 2018/19 Show at The Metropolitan Museum of Art in New York City.

Virginie Viard, who was the late Karl Lagerfeld's "right and left hand" for more than 30 years, is stepping out from the legendary designer's formidable shadow to take over as Chanel's creative director.

Chanel announced Viard's nomination "so that the legacy of Gabrielle Chanel and Karl Lagerfeld can live on" at the same time as it confirmed Lagerfeld's death on Tuesday aged 85.

The smoky-eyed designer who will take the spotlight after shunning it for decades was described by her mentor as "my right and left hand".

He told Netflix's "7 Days Out" documentary series: "Virginie is the most important person, not only for me but also for the atelier, for everything."

Viard declines to reveal her age, as is common in the fashion world.

She joined Chanel as an intern in haute couture embroidery in 1987, four years after Lagerfeld took charge, after being recommended by a neighbor of her parents who was close to Monaco's Prince Rainier.

"I imagine we are complementary," Viard said of her relationship with Lagerfeld as Chanel's head of studio. "I understand where he wants to take Chanel, but I can't really explain it, it's like that," she told AFP in a 2015 interview.

"He doesn't spend three hours on a dress. He sees right away if it works well or not."

In November 2017, she told the London Telegraph that she tries "to please him, but I also like to surprise him."

When Lagerfeld missed Chanel's Paris haute couture show on January 22, with the brand saying he "was tired," it was Viard who took a bow.

"Virginie Viard and Eric Pfrunder, Chanel's director of image, will continue to work alongside him and follow up the collection and the brand's publicity campaigns," Chanel added at the time.

That set off speculation that the man nicknamed "the Kaiser," who has ruled over fashion for a large part of the past half century, may be about to step back.

At his last Paris show in October, Lagerfeld had gone out of his way to acknowledge Viard, one of the behind-the-scenes heroines at the luxury label, for her years of support.

It is an echo of the famous dictum of Coco Chanel:"Fashion changes, but style endures," a fitting mantra for Viard in her new role.

Viard's baptism of fire will come on March 5, when she unveils Chanel's Autum-Winter 2019-2020 ready-to-wear collection in Paris.

London and Milan Fashion Weeks mourned Karl Lagerfeld on Tuesday, with designers paying tribute to the "irreplaceable" icon who helped define the industry.

Milan is due to host the latest Fendi collection on Thursday, Lagerfeld's final work for the label, which paid a moving tribute.

"I was just a child when I first saw Karl," said Silvia Venturini Fendi, the label's creative director for Men's, Accessories and Children's collections.

"Karl Lagerfeld was my mentor and my point of reference. One look was enough to understand each other.

"For Fendi and myself, Karl's creative genius was and will always remain our guide and light."

Other Italian houses set to present at this year's Milan Fashion Week also reacted, with Gucci artistic director Alessandro Michele sharing a photograph of the designer, accompanied by a black heart.

London, where the city's Fashion Week was winding up, also stopped to honor the 85-year-old.

"It's such a loss. I know he wasn't that young, but I didn't expect it," said fashion student Edson Toniato, dressed in a black suit and burgundy turtleneck.

Singer "Girly" said she was struggling to digest the news.

Lagerfeld's unchanging look, with his ever-present sunglasses and white mane, made people think "he just wasn't human, you thought he was ageless," she added.

"The very idea that he's mortal is shocking. Really shocking".

Ann Marie Haynes, who works in fashion merchandising, said there wasn't "anyone that can replace him".

"He will be a huge loss to the fashion community."

Emotion quickly gave way to tributes for the flamboyant fashion giant, who was an inspiration for generations of designers.

"Since I was a student, I have always looked at his work and I was really inspired by him. So it's very sad."