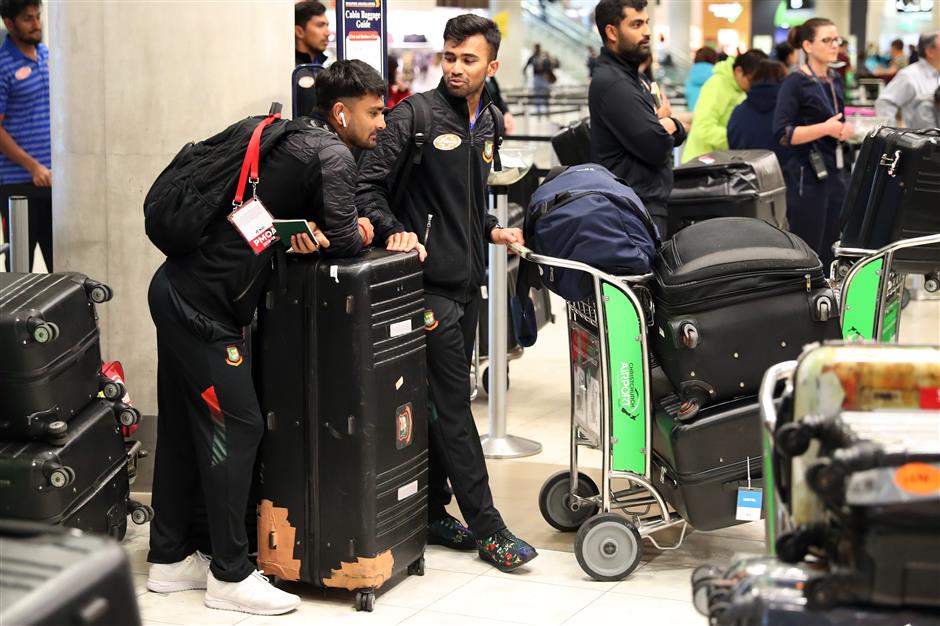 Members of the Bangladesh cricket team check into Christchurch Airport as they look the leave on March 16, 2019, following the deadly massacre on two mosques in the city.

The horror haunted Bangladeshi national cricket team said on Saturday "We still love New Zealand" while checking in their flight to go home at the Christchurch International Airport.

Now the team just wants to go home to unite with their families.

The team had gone to the Al Noor Mosque for Friday prayer in the afternoon, where the shooting spree began minutes earlier. The whole team escaped the scene and rushed back to the hotel, feeling frightened and frustrated.

They were due to play with New Zealand's Black Caps near Hagley Park, located in the area where the mass shooting took place. The test match has been called off after the terror attacks.

The attacks in two mosques in central Christchurch have killed at least 49 people and injured 48 others.

New Zealand Cricket CEO David White has announced that the game between New Zealand and Bangladesh had been called off as a result of the attacks.

The guest team arrived at the Christchurch International Airport on Saturday, checking in the morning flight back home.

At the Singapore Airlines check-in counter, players of the Bangladesh cricket team all looked serious and edgy. They were queuing to have their luggage checked, looking around constantly to confirm safety.

The Christchurch International Airport has upgraded its security with at least three heavily armed policemen at the departure terminal and several aviation security personnel standing by.

Seemingly to be the last player to get onboard the plane, Mushfiqur Rahim was interviewed by Xinhua News Agency.

He offered his sincere condolences to the families of the victims of the terror attacks. He still felt surreal to encounter such impossible attacks.

As a sportsman who had previously been to New Zealand, he still held the view that "New Zealand is one of the best countries in the world."

Asked whether the team had been offered support to cope with the massive shooting, Rahim said they considered themselves lucky enough to escape. "They were happy to be alive" although a sense of horror still haunted some.

All the Bangladesh national cricket team players were escorted by heavily armed New Zealand police with loaded sub-machine guns to the entrance gate of the airport. Due to the lack of direct flights between New Zealand and Bangladesh, the team will need to transfer in Singapore to go home.