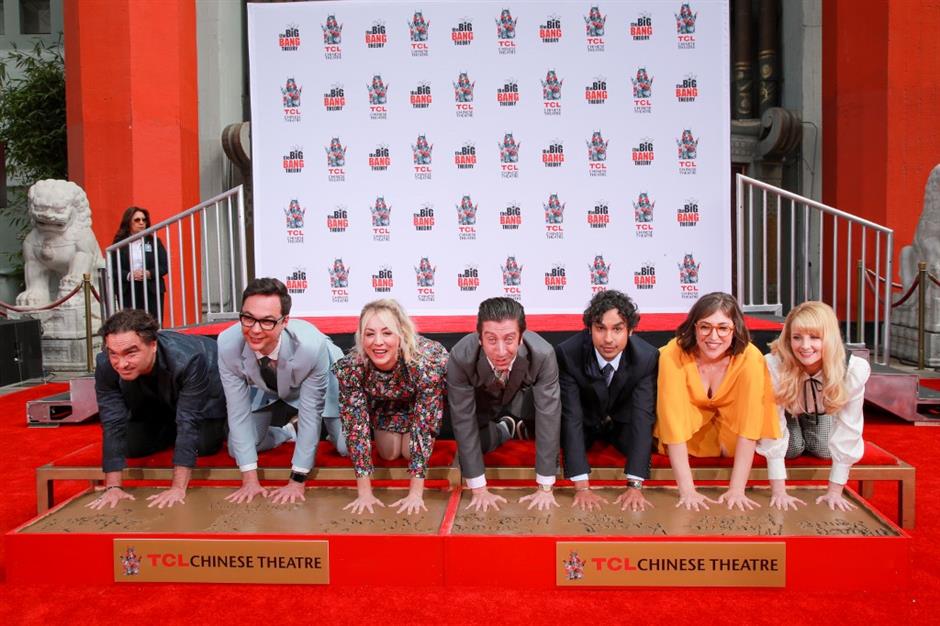 The stars of American television sitcom "The Big Bang Theory," the longest-running multi-camera comedy series in TV in the United States, put their handprints in cement at the TCL Chinese Theatre in Hollywood on Wednesday.

This is the first time a TV series has been honored with such a ceremony in Hollywood. Starring Johnny Galecki, Jim Parsons, Kaley Cuoco, Simon Helberg, Kunal Nayyar, Mayim Bialik, and Melissa Rauch, "The Big Bang Theory" is a sitcom centered on four scientists and their friends' daily lives. The seven leading actors were all invited to sign their names and put their handprints.

Debuted in 2007, "The Big Bang Theory" has received 52 Emmy nominations and 10 wins, and 7 Golden Globe nominations and 1 win to date. As the longest-running multi-camera series in US television history with a record-breaking 279 episodes, it will end its successful run of 12 seasons with a one-hour finale episode on May 16, 2019.

"We just taped our last episode last night," Parsons said at the ceremony. "The chance to get to memorialized like this is very fit-in and very moving. It is the most unbelievably perfect end of this experience."

According to Forbes, Parsons, known for playing physicist Sheldon Cooper, who has a genius-level IQ but displays a fundamental lack of social skills in the television series, is the world's highest-paid television actor in 2018.

"The Big Bang Theory" shot its 279th and final episode on Tuesday on the Warner Bros. TV lot. It will air on May 16 on CBS.

The sitcom reportedly averaged 18.6 million viewers per episode in its 11th season (2017-2018), which is more than any other show on US television. Not only well received in the United States, the show also broadcasts in over 70 countries, including Britain, Canada, China and many more.

"Thank you to China for supporting our show, loving us and we love you back," Nayyar told Xinhua at the ceremony. Nayyar is known for his role as Rajesh Ramayan Koothrappali in the sitcom.

"This writing goes across the world. It reaches so many people because it is simply hilarious and these are so lovable and it is completely worldwide," Cuoco, who has played Penny in the sitcom, added.