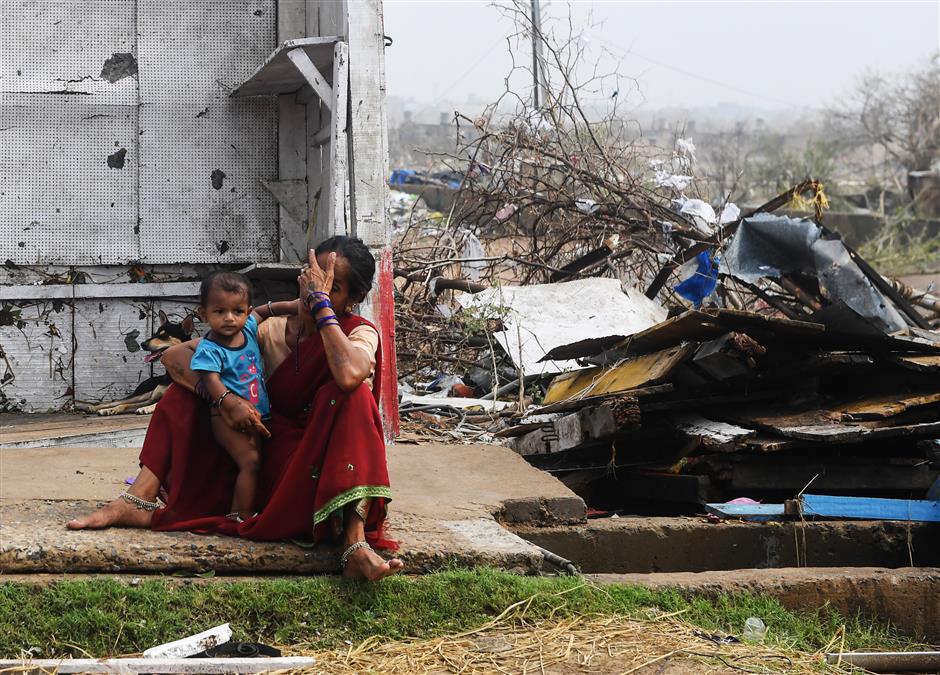 An Indian woman sits with her child next to storm-damaged buildings in Puri in the eastern Indian state of Odisha on May 4, 2019, after Cyclone Fani swept through the area.

The storm, one of the strongest storms in India after super cyclone of 1999, made landfall in the coastal part of the state hours after making landfall and causing havoc in Odisha on Friday.

Local media reports quoting officials said the death toll in Odisha's Puri town due to cyclone has risen to nine.

"Sea conditions are very likely to be rough to very rough along and off West Bengal and adjoining Bangladesh coasts during the next six hours."

A red alert has been issued in coastal areas and fishermen have been asked not to venture into the sea.

Several districts including East and West Midnapore, North and South 24 Parganas, besides Howrah, Hooghly, Jhargram, Kolkata and the Sundarbans are likely to be hit by the storm. Reports pouring in from West Bengal said no loss of life or damage to properties have been reported so far.

Fani caused disruption in air and rail traffic in the state.

Officials said the flight movement at Bhubaneswar airport was likely to be resumed on Saturday late afternoon.

The Odisha government said it evacuated over 1.2 million people to camps on higher grounds.

"Day after tomorrow, on the 6th morning, I will be going to Odisha to take stock of the situation arising in the wake of Cyclone Fani," Modi wrote on twitter.

Modi also spoke to the governors of Odisha and West Bengal and discussed the situation prevailing due to Cyclone Fani.

Meanwhile, Assam and some other parts of India's northeast have been witnessing light to moderate rains since Friday morning. Authorities in Assam has put all ferry services in Brahmaputra river on hold for the next two days.

A spokesman of India's National Disaster Response Force said they have pressed in its men in both Odisha and West Bengal into service to clear the uprooted trees and electricity poles from roads.