Student killed in US school shooting near Columbine 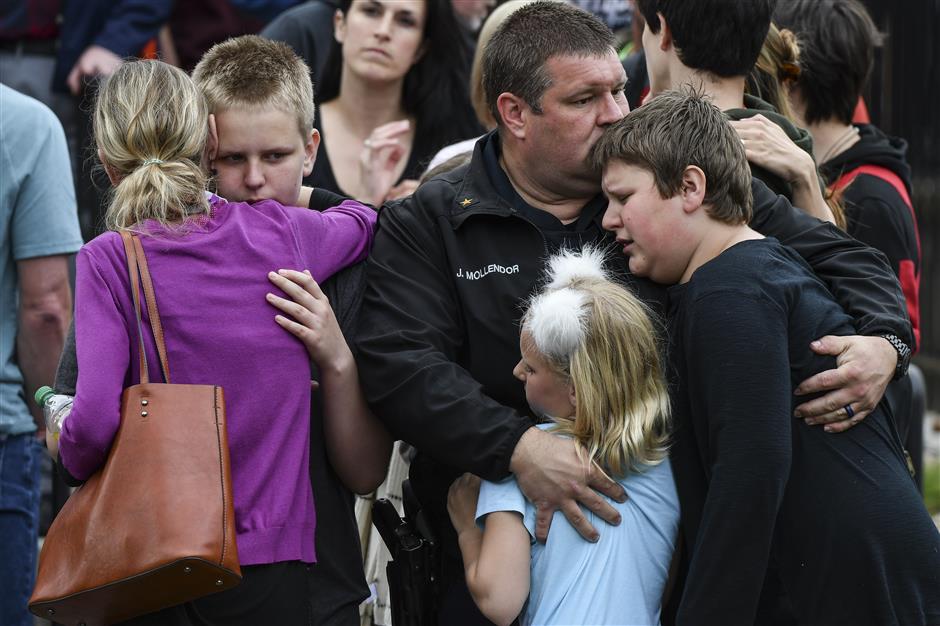 A police officer hugs his kids after they were evacuated to the Recreation Center at Northridge after at least seven students were injured during a shooting at STEM School Highlands Ranch on May 7, 2019, in Highlands Ranch, Colorado.

A teenaged student was fatally shot and multiple others were wounded Tuesday in a school shooting by fellow pupils in the US state of Colorado, across town from one of the worst gun massacres in the country's modern history.

"It is with extreme sadness that we can confirm that 1 student at the STEM School was killed," the Douglas County Sheriff's Office said on Twitter, putting the deceased victim's age at 18.

Sheriff Tony Spurlock had earlier said several of the wounded students — of whom there were a total of eight — were in critical condition, including some in surgery. No staff or teachers were known to be hurt. The youngest injured student was 15.

Two suspects were in custody — an adult man and a male youth. Both attended the school. There were no further suspects.

The two individuals "walked into the STEM school, got deep inside the school and engaged students in two separate locations," the sheriff added, noting the shooting took place at the high school, where students spend the last four years before college.

"We have no information about anyone being targeted."

A handgun was recovered at the scene.

"I have to believe that the quick response of the officers that got inside that school helped save lives," the sheriff said.

The STEM School Highlands Ranch, a kindergarten through 12th grade institution in central Colorado with a student population of around 1,800, is located around 8 kilometers by road from Columbine High School.

The school was closed for several hours as a large police contingent was deployed at the site. The lockdown was lifted around 3:00pm (2100 GMT).

Security measures were taken at several area schools and parents of STEM students were asked to pick up their children at a site near the school.

"I'm just trying not to vomit or cry," one mother told The Denver Post.

Brian Jones, whose son is in second grade said: "It's nerve-wracking... There were lots of parents and lots of kids crying."

Two heavily armed teens killed 12 students and one teacher at Columbine in 1999 — at the time the deadliest such attack in US history.

Spurlock said that the two suspects in the latest shooting had not been on the radar of law enforcement.

"This is a terrible event," he said.

"We're going to investigate that and we will get to the bottom of it to figure out how and what has occurred."

The Columbine shooting sparked a fierce national debate over gun rights and violence. Yet 20 years later, it seems no closer to resolution.

School shootings have since become a frequent occurrence in the US, where firearms killed nearly 40,000 people in 2017, according to the Centers for Disease Control and Prevention.

Since Columbine, an estimated 226,000 children in 233 schools have been exposed to the sight or sound of gunfire, according to a Washington Post investigation.

The worst shootings to date were those at Sandy Hook Elementary School in Newton, Connecticut in 2012 (20 young children and six adults were killed) and at Marjorie Stoneman Douglas High School in Parkland, Florida last year (17 dead).

The number of firearms in circulation has continued to grow (now at 393 million in a nation of 326 million people), and mass shootings have become a disturbingly regular part of American life.

Despite the scale of gun violence across the nation, efforts to address it legislatively have long been largely deadlocked at the federal level.