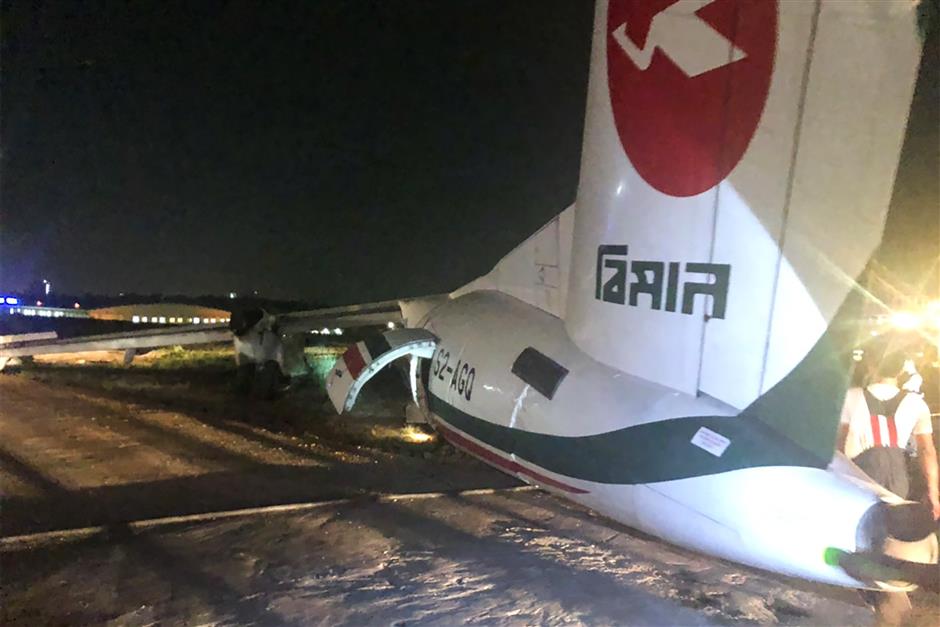 This handout picture taken and released by Myanmar Department of Civil Aviation on May 8, 2019, shows a Biman Bangladesh airlines passenger after it slid off a runway at Yangon International airport in Yangon.

The Chinese embassy in Yangon confirmed late Wednesday that three Chinese nationals were injured after a passenger plane of the Biman Bangladesh airlines skidded off the runway at Myanmar's Yangon International Airport .

The three Chinese nationals sustained minor injuries and received treatment at a local hospital, according to the embassy, adding that it already sent staff to express solicitude for them.

The Biman Flight No. BG-60 from Dhaka to Yangon carrying 37 people, some of whom come from Bangladesh, Myanmar, Britain, China and India, skidded off the runway at around 6:50pm local time (1220 GMT) on Wednesday.

Some 18 people including five crew members were injured due to the incident, said the Department of Civil Aviation Myanmar on Wednesday.

"At least 16 people including a pilot with head injury have been sent to the North Okkalapa General Hospital for treatment so far," Zwe Yan Naing, chairman of Shweyaung Thamaing, Emergency Rescue and Social Support Organization, told Xinhua earlier.

The Bombardier Dash 8 aircraft veered off the runway during the landing attempt due to heavy rains and poor visibility, said a statement from the Yangon Aerodrome Company Limited, the operator of the YIA.

The runway reopened two hours after the accident and an investigation was underway. A number of flights were cancelled Wednesday night following the accident.