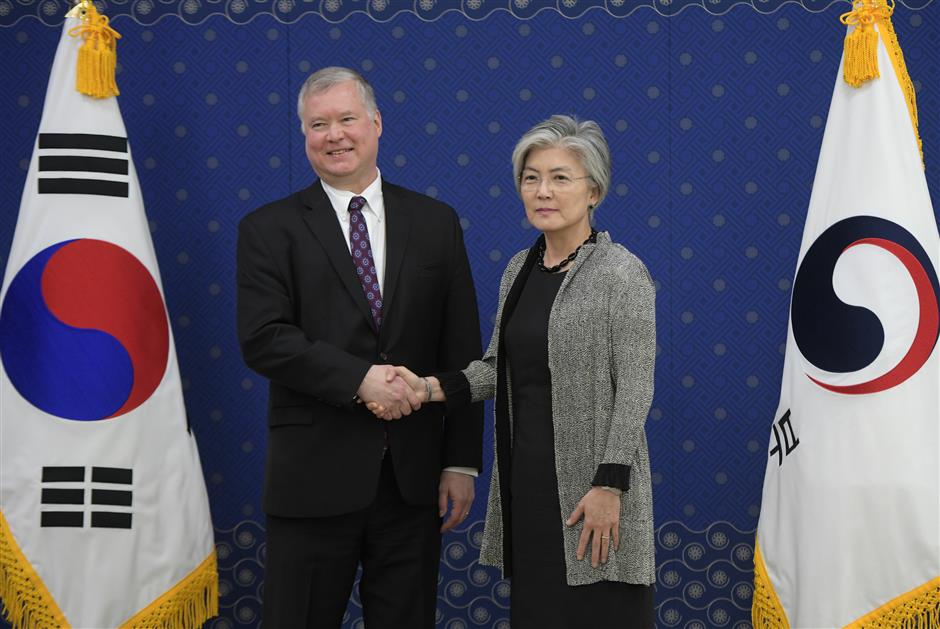 US Special Representative for North Korea Stephen Biegun (L) shakes hands with South Korea's Foreign Minister Kang Kyung-wha (R) during their meeting at the foreign ministry in Seoul on May 10, 2019.

Stephen Biegun, US special representative for the Democratic People's Republic of Korea affairs, said Friday that the door remained open for the DPRK's return to negotiations.

Biegun made the remarks during his courtesy call to South Korean Foreign Minister Kang Kyung-wha, according to Seoul's foreign ministry. The US diplomat arrived in Seoul Wednesday for his four-day trip.

The remark came a day after the DPRK fired two unidentified projectiles, presumed to be short-range missiles, from its northwestern region. They traveled eastward about 420 km and 270 km at an altitude of 45 km to 50 km.

Five days earlier, Pyongyang fired several short-range projectiles into the sea off its east coast. The projectiles flew between 70 km and 240 km at an altitude of some 60 km.

Kang said the DPRK's recent projectile launches were an act that is of no help for the improvement of inter-Korean relations and efforts to defuse military tensions on the peninsula, expressing her worry about it.

The top South Korean diplomat emphasized the importance for earnest dialogues between Seoul, Pyongyang and Washington for the complete denuclearization and the lasting peace settlement.

After the courtesy call, Biegun presided over the working group meeting together with Lee Do-hoon, South Korean special representative for Korean Peninsula peace and security affairs, according to the Seoul ministry.

The working group was launched last November to coordinate between Seoul and Washington the Korean Peninsula issues such as denuclearization, sanctions and inter-Korean cooperation.

During the meeting, Lee and Biegun made in-depth discussions on ways to advance the complete denuclearization of and the settlement of permanent peace on the peninsula, sharing their assessment on recent situations, including the DPRK's projectile launches.

The working group meeting was attended by South Korean officials from the defense and unification ministries and the presidential Blue House, according to local media reports.

From the US side, participants were Alex Wong, US deputy assistant secretary of state for DPRK affairs, and Allison Hooker, director of the White House National Security Council for the DPRK.