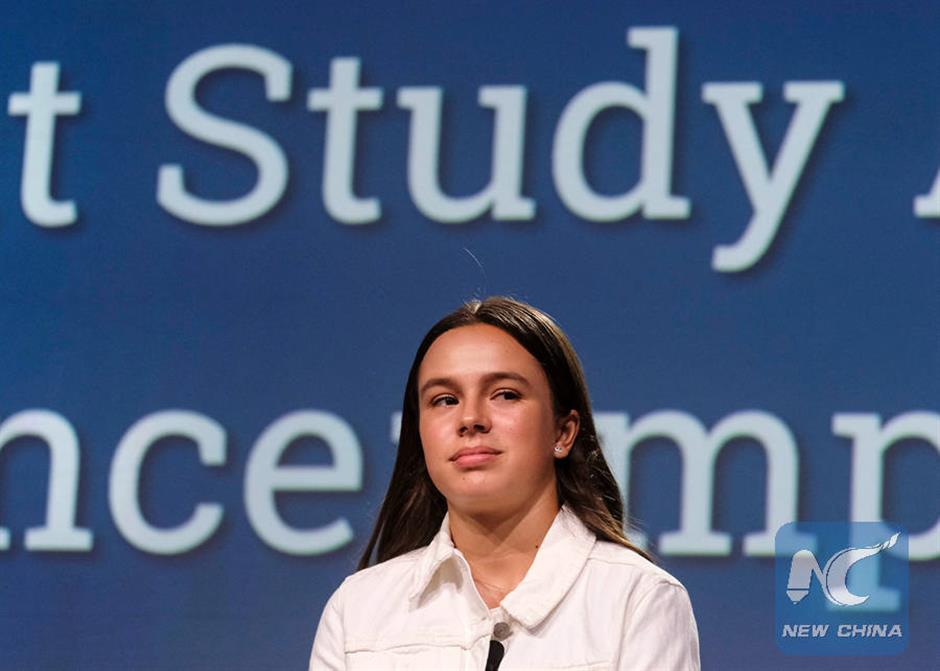 A crowd of over 1,300 fell silent as 13-year-old Kamila Carter told her story of being raised by deaf parents from two different countries and how she crosses US-China barriers in the world of sounds and silence.

To communicate with her father, mother and grandmother, Kamila had to learn three different languages. A 7th-grade student at Tierra del Sol Middle School, she was the youngest speaker at the 2019 National Chinese Language Conference in San Diego in western US state of California. On a Friday's panel titled "Student Study Abroad Experience: Impact and Best Practices," young Kamila spoke about conquering her fears to travel to China all alone.

The annual National Chinese Language Conference is the largest annual gathering in North America that brings together leaders and practitioners in the fields of Chinese language and culture education and US-China education partnership.

Kamila talks to her father in American sign language, to her Mother in Spanish and Spanish sign language and to her grandmother in English. 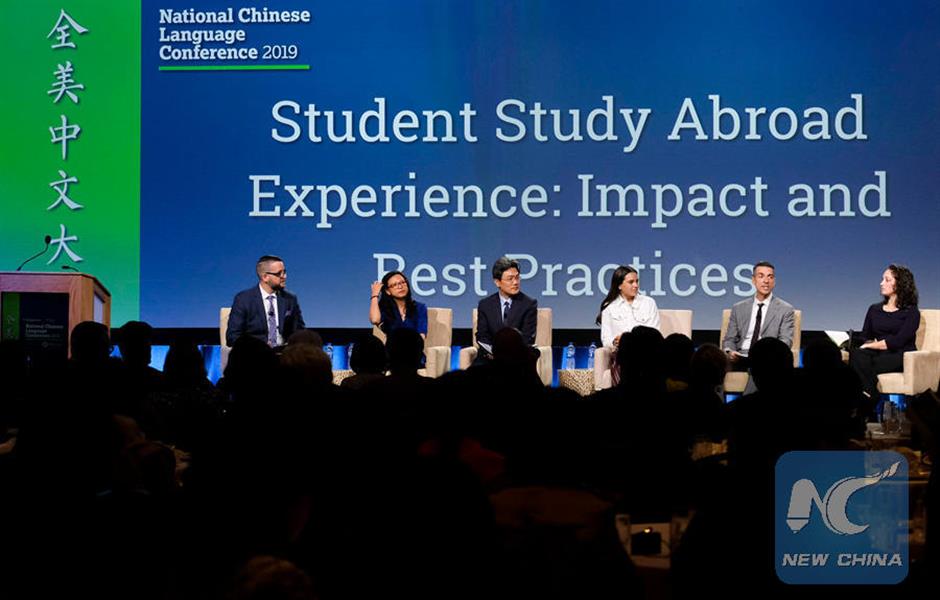 "I can't imagine my life without deaf parents," Kamila said. "It was never a burden, but it was this responsibility that I loved having. Interpreting for them, making phone calls ... It helped me be more responsible and be the good student that I am."

At the conference, mother, grandmother, and teacher huddled around the young girl, beaming with pride as they each chimed in to talk about her past, present and future. They explained that for Kamila, being able to speak multiple languages was not only necessary, it's also a passion that she shares with her father. Tod Carter loved languages from a young age, despite being unable to hear or speak.

Judy Carter, Kamila's grandmother recollected, "He used to spread out books on the floor — that's what he wanted for his birthday presents, and he would compare languages."

Following in her father's footsteps, Kamila also loved languages as a child, often playing with a favorite toy that spoke in French, Spanish, and English.

"When she was ready to start kindergarten, her dad really wanted her to go into a school that could teach her another language," Judy explained.

The family enrolled Kamila in a Mandarin immersion program at Riverview elementary school, starting her on an exciting path that would eventually lead to China. As her Chinese language skills improved, Kamila was active in participating in contests and programs hosted by the Confucius Institute and other educational groups.

In 5th grade, Kamila competed in the US Southwest Region China Bridge Competition. Out of her love for the deaf community, Kamila performed the song "A Thankful Heart" in Chinese sign language, winning first place.

"I wouldn't be the person I am today without Chinese because it's opened so many doors," Kamila spoke to the audience of conference attendees with a stage presence that far exceeded her age, "I've been able to go to China, I've been able to participate in competitions... meet new people and understand their language, and better understand those people as well." 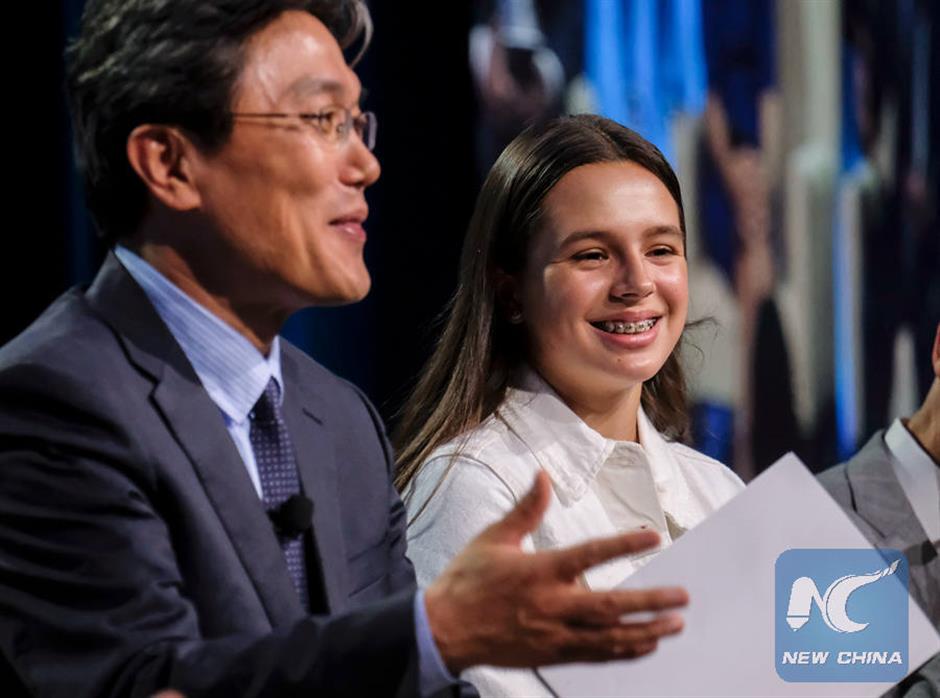 Despite her composure on stage, Kamila confided in Xinhua how nervous she was to be on a panel with adults, "I was nervous that I wouldn't know what to say. they're so much older than me and already have a job, and I'm just a little student," Kamila said.

As Kamila shared her experiences of traveling to China alone at the age of 12, the audience listened intently and applauded her courage.

Kamila spent a month with a Chinese host family in Shandong province practicing her Chinese and learning about Chinese culture.

"We arranged for her to go to China to learn the Chinese sign language so she could communicate with the deaf people in China." Dr. Cheng explained, glowing with pride in the star pupil. "I have great hopes that she will be a goodwill ambassador ... She's a global citizen."

Kamila's mother told Xinhua the experience of saying goodbye to her daughter before she flew to Beijing. Emotion showed in her eyes as she signed to the interpreter, "When we met in LAX (Los Angeles International airport), we cried. We told her we were going to be strong and we weren't going to worry and that everything was going to work out well, and it did."

Members of the audience could be seen tearing up as Kamila spoke about meeting a deaf man in China, "He used Chinese sign language and I only knew American sign language, so it was a little hard to communicate, but I was able to learn so much from him about how he grew up and compare that to how my parents grew up."

Despite her age, young Kamila has experienced aspects of life and communicated with an entire community that most people never will. She inspires all who meet her with hope through her courage to travel to China alone, and her drive to reach across borders to communicate in China with those who can hear and those who can not, building bridges and developing harmonious international relationships.

Kamila said she'd like to use her language ability to reach the deaf community in China, "That's definitely something that's going to be part of my plan. I want to make things a little easier for them, cause I know they don't have it easy, but that doesn't mean that they cannot do amazing things, cause my parents have shown me that nothing can stop you from achieving great and wonderful things, and they've always encouraged me to work hard and do whatever I can. Since I've had my parents help with that, I want to help other people to do the same."

Kamila will continue her multicultural adventures by being the only American to compete in a Chinese traditional Abacus competition in Malaysia later this month. Her advice for other students thinking about going abroad is to face their fears and take a chance, "Go for it, because you never know what could happen."