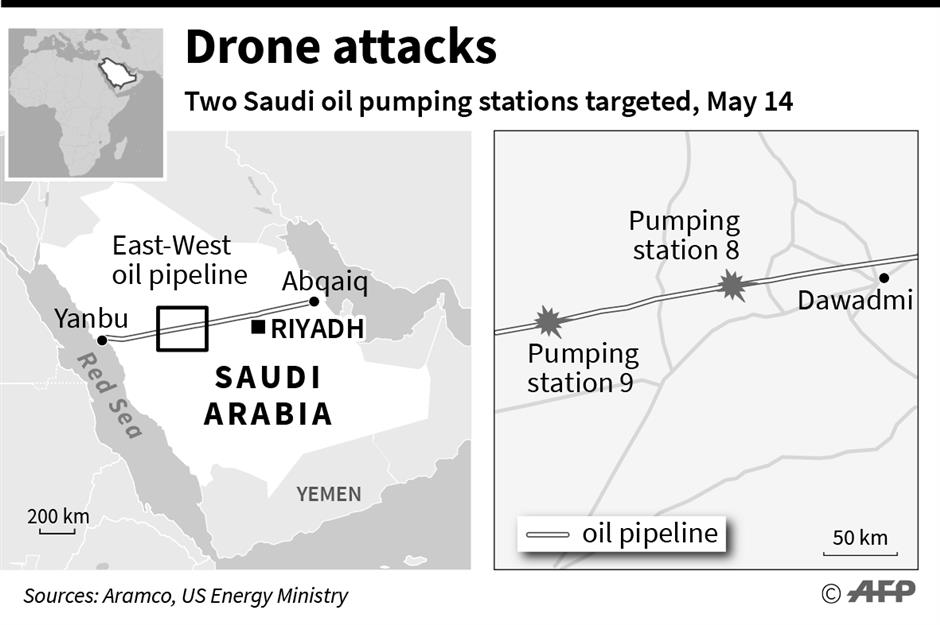 Days after the United States deployed bombers and an assault ship to bolster an aircraft carrier in the region, the world’s largest crude exporter said two pumping stations had been targeted early yesterday.

They lie on the East West Pipeline, able to pump 5 million barrels of oil a day from the oil-rich eastern province to a Red Sea export terminal.

The announcement came hours after Yemen’s Huthi rebels said they had targeted vital installations in Saudi Arabia, which leads a military coalition against them.

Energy minister Khalid al-Falih said Saudi Aramco had “temporarily shut down” the pipeline to “evaluate its condition” but added that oil production and exports had not been interrupted.

“The company (Saudi Aramco) is working on restoring the pumping station before resuming operations,” he said in a statement carried by the official Saudi Press Agency.

The stations reportedly targeted lie west of Riyadh, at Dawadmi and Afeef.

Falih said yesterday’s incident was an “act of terrorism ... that not only targets the kingdom but also the security of oil supplies to the world and the global economy.”

Huthi spokesman Mohammed Abdusalam wrote on Twitter that the attacks were “a response to the aggressors continuing to commit genocide” against the Yemeni people.

Saudi Arabia and the United Arab Emirates intervened in the Yemen war to bolster the internationally recognized government’s efforts against the Huthis in March 2015.

The 1,200-kilometer pipeline reportedly hit yesterday serves as an alternative for Saudi crude exports if the strategically vital Strait of Hormuz at the mouth of the Gulf were to be closed.

Iran has repeatedly threatened to close the strait in case of a military confrontation with the United States.

The reported pipeline attacks came after the UAE said four ships were damaged in “sabotage attacks” off the emirate of Fujairah, close to the Hormuz, on Sunday.

The attacks came after the United States deployed the USS Abraham Lincoln carrier group, an amphibious assault vessel, a Patriot missile battery and B-52 bombers, triggering fears of a possible military confrontation.

“In an environment of rising regional tensions, limited Iranian operations against the UAE and Saudi Arabia might be designed to dissuade Abu Dhabi and Riyadh and signal that war with Iran will not be limited to Iranian soil,” said Alex Vatanka, senior fellow at the Middle East Institute in the US.

A UAE government official said the Saudi oil tankers Al-Marzoqah and Amjad were attacked off the emirate of Fujairah along with the Norwegian tanker Andrea Victory and an Emirati ship, the A. Michel. No casualties were reported and none of the vessels sank.

The UAE minister of state for foreign affairs, Anwar Gargash, said the Emirates will probe the “deliberate sabotage.”

Saudi Arabia said its two tankers suffered “significant damage” but there was no oil spill. The Andrea Victory’s managers, Thome Group, said the ship’s hull had been pierced “after being struck by an unknown object on the waterline.”

The United Nations urged all sides to "exercise restraint for the sake of regional peace.”