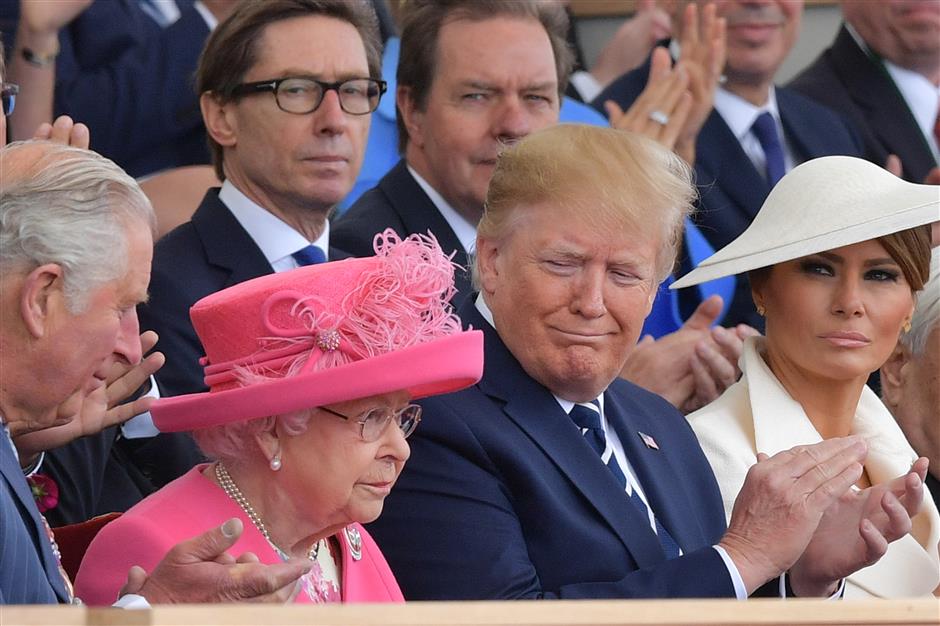 (L-R) Britain's Prince Charles, Prince of Wales, US President Donald Trump and US First Lady Melania Trump applaud after Britain's Queen Elizabeth II (2L) made her address during an event to commemorate the 75th anniversary of the D-Day landings, in Portsmouth, southern England, on June 5, 2019.

US President Donald Trump and Queen Elizabeth II joined 300 veterans in paying tribute to their fallen comrades at a poignant ceremony on Wednesday marking the 75th anniversary of D-Day.

They took turns honoring those involved in the Allied cross-Channel invasion of the Normandy beaches, the largest amphibious assault in history, that left 4,400 Allied troops dead on the first day.

"I was 18 and I was hoping for some sort of great adventure, but yes, I knew something big was obviously happening," former pilot Gregory Hayward, 93, told AFP.

"It brings back the memories and I'm grateful... to be able to survive long enough to be here on the 75th anniversary."

With some in the audience shedding tears and a few of the surviving veterans, now all in their 90s, sitting upright in the front rows, Trump read excerpts from the prayer US president Franklin Roosevelt delivered by radio on D-Day.

"They will need Thy blessings for the enemy is strong. He may hurl back our forces but we shall return again and again," Trump read, in one of the last acts of his three-day state visit to Britain.

Queen Elizabeth, 93, also paid tribute to the sacrifices made.

"It is with humility and pleasure, on behalf of the entire country — indeed the whole free world — that I say to you all: thank you," she said.

Merkel said: "That I could participate today as German chancellor and that we jointly defend peace and liberty today is a gift from history we have to protect and to cherish."

Portsmouth, on the southern English coast, was the main staging point for 156,000 US, British, Canadian and other Allied troops who sailed for northern France.

The Battle of Normandy on June 6, 1944, led to the liberation of Europe and helped bring about the end of World War II the following year.

Fear of being afraid

British Prime Minister Theresa May read a letter written by Captain Norman Skinner to his wife Gladys on June 3, 1944, which was in his pocket when he landed in Normandy on D-Day. He was killed the following day.

"I am sure that anyone with imagination must dislike the thought of what's coming," his letter said.

"But my fears will be more of being afraid than of what can happen to me."

At a ceremony in Caen, French leader Macron paid tribute to 70 French resistance fighters executed in prison by the Germans on June 6, 1944.

"Under the pressure from the Allied armies who landed on our shores, the Germans wanted to remove their enemies, the Resistance prisoners held in the cells of this prison," former inmate Bernard Duval said at the ceremony.

In the evening, around 250 veterans set off to retrace their journey across the Channel, sailing out of Portsmouth bound for Normandy on board the chartered cruise ship MV Boudicca, along with a flotilla of British navy vessels.

The D-Day commemorations are among May's last official duties before she steps down as leader of the governing Conservatives on Friday over her failure to get Britain out of the EU on time.

She will remain as prime minister until her successor is chosen in late July. Eleven candidates intend to stand.

May's meetings with Trump have gone smoothly. The president tweeted on Wednesday that he "could not have been treated more warmly in the United Kingdom by the royal family or the people."

He reaffirmed his commitment to a "very big trade deal" with Britain after Brexit.

The US president left Britain after the D-Day ceremony for Ireland, where he met Prime Minister Leo Varadkar at Shannon Airport for talks.

Trump said he thought Brexit would work out well for Ireland, including "your wall, your border." The invisible frontier between the UK and the Irish Republic is one of the most contentious Brexit issues.

The president was then heading to his luxury golf resort near the village of Doonbeg.

He leaves for northern France on Thursday, where he will attend another D-Day ceremony alongside May and Macron.