Trump says progress made in US-Mexico talks 'not nearly enough' 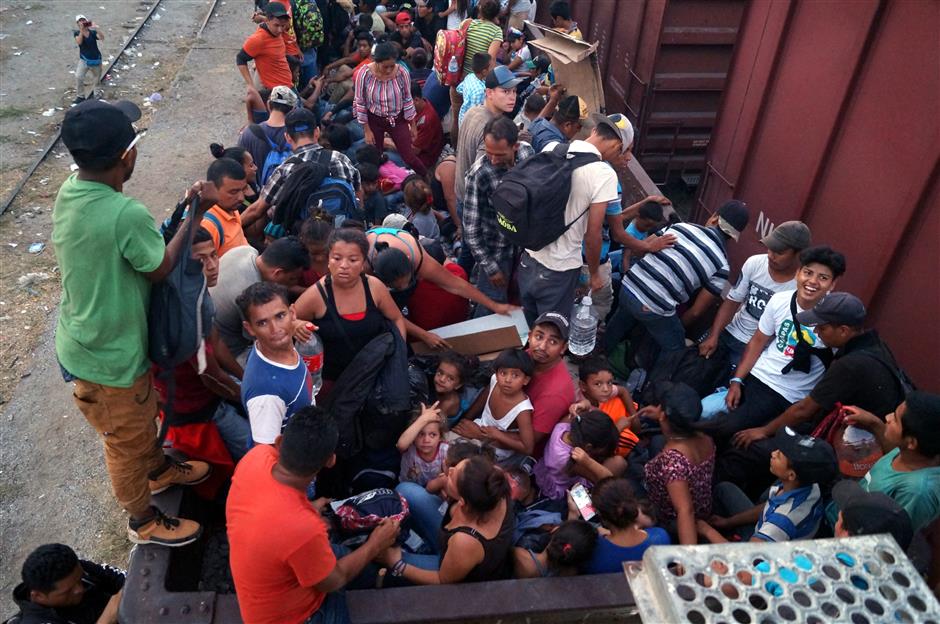 Central American migrants get on train carriages in an attempt to make their way to the US border, in the municipality of Arriaga, Chiapas, Mexico, on April 25, 2019.

US President Donald Trump said Wednesday that the progress which has been made in US-Mexico talks on tariffs and immigration is not enough, renewing his threat to impose a 5-percent tariff on all imported Mexican goods next week.

"Immigration discussions at the White House with representatives of Mexico have ended for the day. Progress is being made, but not nearly enough!" Trump tweeted Wednesday afternoon, noting that talks would resume Thursday.

"If no agreement is reached, tariffs at the 5% level will begin on Monday, with monthly increases as per schedule," the president said.

US Vice President Mike Pence hosted the meeting in his office with Secretary of State Mike Pompeo, acting Secretary of the US Department of Homeland Security Kevin McAleenan, Mexican Foreign Minister Marcelo Ebrard and other senior US and Mexican officials.

Ebrard told reporters that the conversation during Wednesday's meeting focused on immigration, while tariffs were not discussed, CNBC reported.

According to official figures released Wednesday, US law enforcement officials apprehended more than 130,000 people trying to cross the southern border illegally in May, hitting a 13-year high for the month.

The statistics, usually announced in the second week of each month, were released before the Wednesday meeting, as the US government is pressuring Mexico to curb the flow of immigrants, many of whom originated from central American countries.

In an interview with CNN prior to the talks, White House trade adviser Peter Navarro said the threatened tariffs against Mexican goods "may not have to go into effect" if the country can take necessary measures to halt undocumented migrants crossing the southern US border.

Trump said last week that he would impose a 5-percent tariff on all imported Mexican goods beginning June 10 so as to pressure the country to stop the flow of undocumented migrants crossing the border, and will gradually increase tariffs until the problem is remedied, drawing extensive criticism both domestically and abroad.

"If the Congress lets Trump get away with this, he will be free to slap tariffs on any country or any product at any time for whatever reason he dreams up," Edward Alden, a senior fellow at the Council on Foreign Relations, said in a blog post, adding that the president's decision to link trade to immigration and refugee concerns is an "especially dangerous escalation."