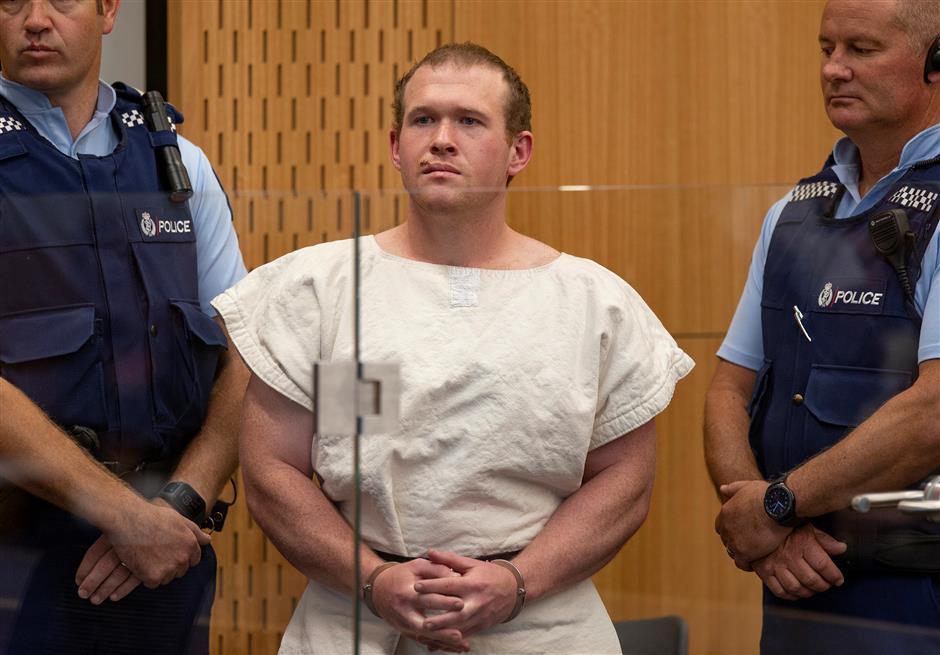 In this picture taken on March 16, 2019, Brenton Tarrant (C), the man charged in relation to the Christchurch massacre, stands in the dock during his appearance at the Christchurch District Court.

The man accused of shooting dead 51 Muslim worshippers in the Christchurch mosque attacks pleaded not guilty to multiple murder and terrorism charges Friday and was committed to stand trial next year.

Appearing in Christchurch High Court via audio-visual link from a maximum-security prison in Auckland, Brenton Tarrant sat silently as lawyer Shane Tait said his client pleaded "not guilty to all charges."

The self-proclaimed white supremacist has been charged with 51 counts of murder, 40 of attempted murder and engaging in a terrorist act over the March 15 atrocity in the South Island city.

The 28-year-old Australian allegedly opened fire in the packed Al Noor mosque during Friday prayers, then traveled across town to continue the carnage in the suburban Linwood mosque, while livestreaming his actions on social media.

The court heard that mental health assessments had found Tarrant was fit to stand trial for the worst massacre in modern New Zealand history.

"No issue arises regarding the defendant’s fitness to plead, to instruct counsel, and to stand his trial. A fitness hearing is not required," Judge Cameron Mander said in a statement issued shortly after the hearing.

About 80 survivors and relatives of those killed packed into the courthouse's public gallery for a glimpse of Tarrant.

Wearing a grey crewneck jersey, Tarrant smirked at times during the hearing.

Judge Mander set a trial date of May 4 next year, with Tait saying it was expected to last at least six weeks.

"The court endeavors to bring serious criminal cases to trial within a year of arrest. The scale and complexity of this case makes this challenging," Mander said.

Tarrant was remanded in custody to appear for a case review hearing to be held on August 15.

Mander barred news outlets from taking photographs or video of Tarrant's appearance, although he said images from an earlier hearing in April could be used.

New Zealand's government tightened the country's gun laws in the wake of the attack and has said it will review laws dealing with hate speech.

It has also supported international efforts to ensure that social media giants do more to combat online extremism.