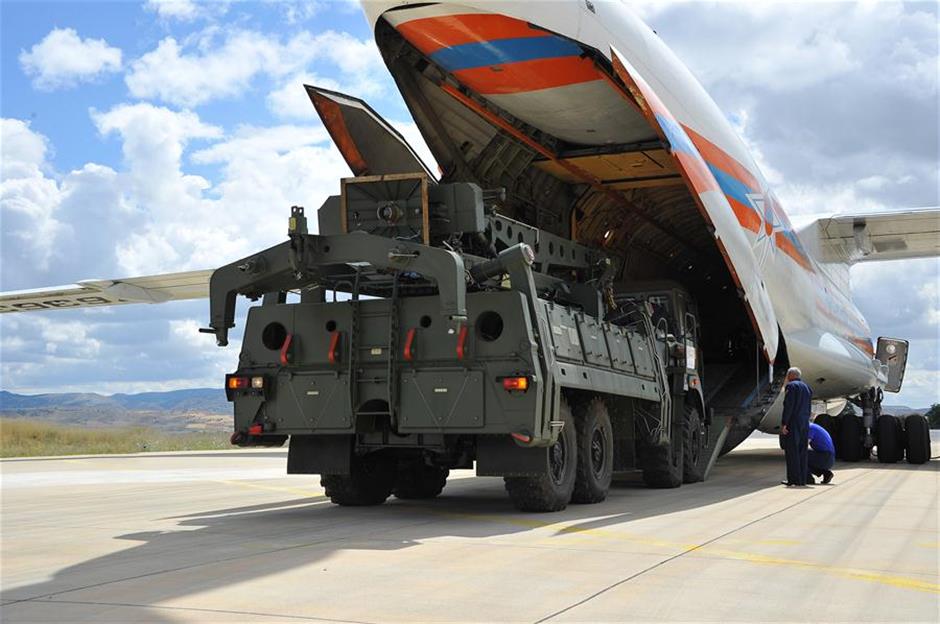 A Russian Antonov military cargo plane, carrying parts of the S-400 missile defense system from Russia, is unloaded after landing at the Murted Air Base in Ankara, Turkey, on July 12, 2019. The first batch of Russian S-400 air defense system was delivered in Turkish capital city of Ankara on Friday, the Turkish Defense Ministry said.

Turkey began taking the delivery of Russia's S-400 air-defense system on Friday, completing a much-debated deal that is likely to trigger sanctions from the United States and test the NATO alliance.

The first components for the state-of-the-art system arrived aboard three Russian military planes at the Murted air base, located at a distant suburb of Ankara, the Turkish Defense Ministry said in a statement.

"Turkey received the first batch of S-400 air defense systems. The deliveries are sent to the Murted air base," the ministry said. Two more deliveries are expected in the coming days.

Foreign Minister Mevlut Cavusoglu told reporters in Ankara that "there is no problem in the deliveries," adding that "the process will also continue in a healthy pace in the future."

The purchase, which is the fruit of a controversial agreement inked between Ankara and Moscow in 2017, signals, according to observers, Turkish President Recep Tayyip Erdogan's willingness to coordinate more with Russia and could set off a new crisis in relations between Turkey and the US, two major NATO allies.

The US President Donald Trump's administration had given mixed signals about how it might respond if Turkey went through with the deal, but US officials had warned of repercussions, including canceling sales of around 100 high-tech US-made F-35 fighter jets to Ankara and the imposition of sanctions under a 2017 law in cooperation with adversaries.

During a visit to NATO headquarters in Belgium in June, acting US Defense Secretary Mark Esper said "if Turkey accepts delivery of the S-400s, they will not receive the F-35."

However, Trump has been publicly supportive of the Turkish president and expressed recently sympathy for Erdogan's decision to purchase the surface-to-air S-400s. Erdogan, after meeting Trump at the G-20 Summit in June in Osaka, said he did not believe that the United States would sanction Turkey.

Erdogan has refused to back down on the S-400 deal and defended the 2.5 billion US dollar acquisition of the Russian system as part of Turkey's sovereign right to defend itself, and said he tried to purchase the US-made Patriot air defense system but was not offered favorable terms in the past.

US officials fear that Turkey's possession of the S-400 could give Russia access to secrets of the F-35's stealth technology and argued that it would create interoperability problems inside NATO.

Ankara has ruled out such a possibility, saying that it is a long standing NATO country, since 1952, and that the S-400 would not be integrated in NATO capabilities.

Nevertheless, Turkey's purchase of F-35 planes could be compromised as a concrete move last month, the Pentagon said it would halt the training of Turkish pilots to fly the warplane.

Possible US economic sanctions would mark a new standoff in Turkish-American ties. Last year, Washington imposed sanctions on Turkey over its detention of an American pastor, triggering a currency crisis. Sanctions were lifted after Ankara released the clergyman.

Following the arrival of the first S-400 components to the Turkish capital, the Turkish lira dropped about 1.5 percent against the greenback, trading at 5.76 lira.

The deal with Russia also raised some concerns in Western circles that Turkey is drifting away, closer to Moscow's sphere of influence.

Deliveries of the S-400 components to Turkey would continue "in the coming days," according to a statement by Turkey's defense industries authority, which did not say when or where the completed system would ultimately be deployed.

"Once the system is completely ready, it will begin to be used in a way determined by relevant authorities," said the statement.

An official close to the matter said to Xinhua that the first battery could be deployed at Murted base and a second one likely in southeastern Turkey, near the Syrian and Iraqi border and be operational by October.

"Assessments are underway at several levels to decide on the issue, but everything is going according to plan," said the official on the condition of anonymity.