Trump rallies base as impeachment bid blocked in Congress 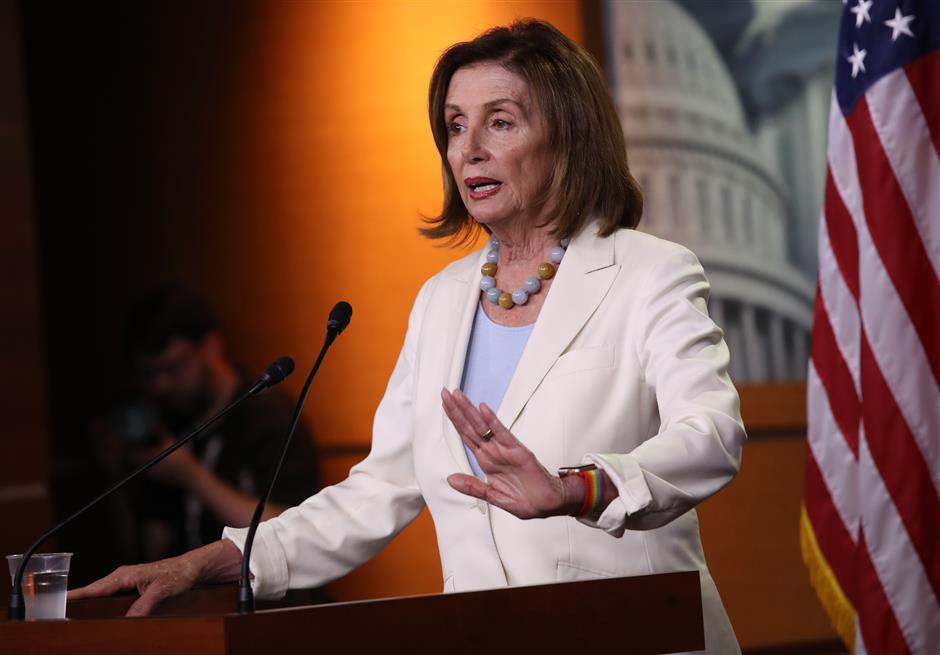 Speaker of the House Nancy Pelosi (D-CA) answers questions during a press conference at the US Capitol on July 17, 2019, in Washington, DC.

President Donald Trump moved to galvanize his core supporters Wednesday after sparking outrage with attacks on ethnic minority Democrats, as an opposition bid to launch impeachment proceedings was shot down in the US Congress.

Trump ignited a firestorm with a volley of tweets and comments, deemed racist by many critics, in which he accused liberal congresswomen of color of hating America and urged them to "go back" to their countries of origin.

But even as anger raged in Democratic ranks, many in the party joined Republicans in the House of Representatives in voting to block a resolution to launch impeachment proceedings against Trump over his remarks.

Liberal congressman Al Green had forced a vote on the articles which said Trump is "causing such harm to the society of the United States, is unfit to be president and warrants impeachment, trial and removal from office."

The vote was a striking moment on the floor that Nancy Pelosi, the top Democrat in Congress, had sought to avoid.

With 95 Democrats voting in favor of considering impeachment, far more than previous efforts in 2017 and 2018, some in the party are making it clear they are itching to move forward with punitive action against Trump.

Instead the president put a victorious spin on the proceedings as he arrived in Greenville, North Carolina for an evening rally — his first since announcing his 2020 re-election bid.

"We have just received an overwhelming vote against impeachment," he told reporters. "And that's the end of it. Let the Democrats now go back to work."

Eager to marshal his base, Trump promised earlier that his speech in North Carolina would address both "people who love, and hate, our Country."

His appearance comes a day after the House's stunning repudiation of his attacks on four first-term progressive lawmakers, and hostile language targeting immigrants.

While Trump's characteristically divisive rhetoric has enraged liberals, just four Republicans voted with the 235 Democrats to condemn him for "racist comments that have legitimized and increased fear and hatred of new Americans and people of color."

'Those words are racism'

All are American citizens and Omar, who is of Somali origin, is the only one of the four born outside the US.

Trump's four-day attack — including taunts like "if you hate our Country, or if you are not happy here, you can leave!" — and the Democratic response have laid bare deep rifts in Washington.

Pelosi stood by the resolution condemning Trump's language. "By its definition, those words are racism," she said.

But she told reporters she would rather see ongoing investigations of Trump play out before launching any divisive impeachment effort.

"We have six committees who are working on following the facts in terms of any abuse of power, obstruction of justice and the rest," she said of congressional investigations of the president, including on Russia's interference in the 2016 election.