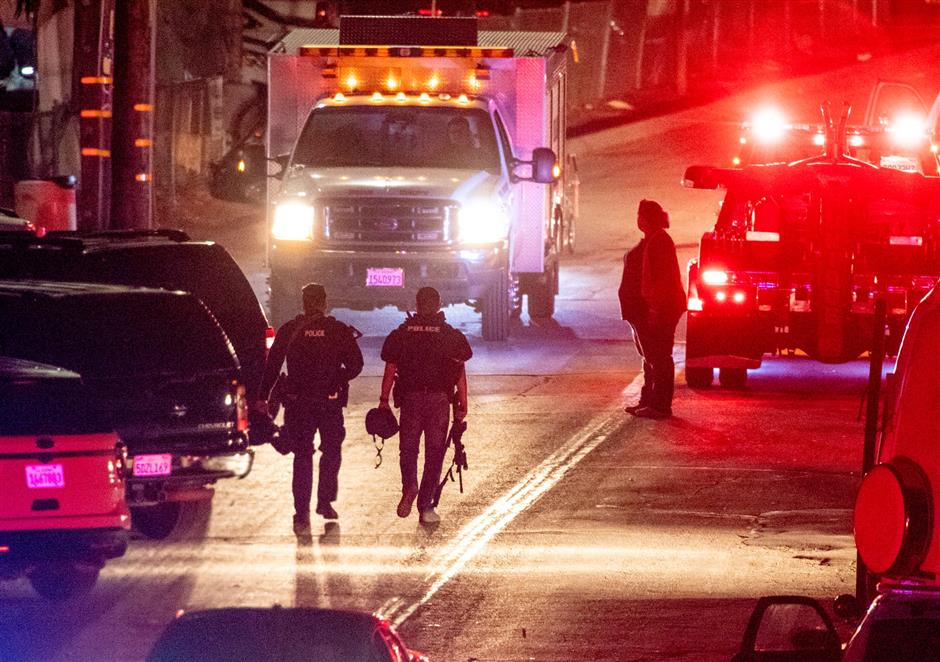 People and police gather near the scene of the deadly Gilroy Garlic Festival shooting in California on Sunday. Three people were killed and at least 15 others injured in the shooting, police said. Officers confronted and shot dead the suspect “in less than a minute,” said Scot Smithee, police chief of the city of Gilroy, which is 48 kilometers southeast of San Jose.

Police were searching yesterday for a suspected accomplice of the gunman who killed three people, including a 6-year-old boy, in a mass shooting at a food festival in California.

The gunman was shot dead by police officers within minutes of opening fire early on Sunday evening (local time) at the three-day Gilroy Garlic Festival, about 48km southeast of the city of San Jose.

The gunman was identified as Santino William Legan, 19, according to CBS News and NBC News, both citing unnamed law enforcement officials. The Gilroy police department declined to confirm the reports but planned to hold a news briefing later.

Among those killed was a 6-year-old boy, according to news reports. Fifteen people were injured, but it was unclear how many were shot or otherwise hurt in the crush of bystanders trying to flee, according to police. One person was in critical condition, a hospital spokeswoman said.

A second suspect “was involved in some way, we just don’t know in what way,” Gilroy Police Chief Scot Smithee said late on Sunday, without giving further details.

Police recovered a rifle at the scene, Smithee said.

The gunman, who has not been publicly identified, cut through a fence to evade metal detectors and other security at the festival entrance, police said.

Footage uploaded to social media showed festival attendees scattering in fear and confusion as loud popping sounds could be heard in the background.

“What’s going on?” a woman can be heard asking on one video. “Who’d shoot up a garlic festival?”

One of the victims was identified by his grandmother as Stephen Romero in an interview with ABC7 News. Maribel Romero described her 6-year-old grandson as “a really loving boy.”

Her daughter-in-law and the boy’s other grandmother were also being treated in a hospital for gunshot wounds, she said. “I want justice for my grandson,” she said.

Evenny Reyes, 13, told the San Jose Mercury News that at first she thought the gunfire was fireworks but then saw someone with a wounded leg. “We were just leaving and we saw a guy with a bandana wrapped around his leg because he got shot,” Reyes told the newspaper. “There was a little kid hurt on the ground. People were throwing tables and cutting fences to get out.”

The Gilroy Garlic Festival is an annual event run by volunteers and held outdoors.