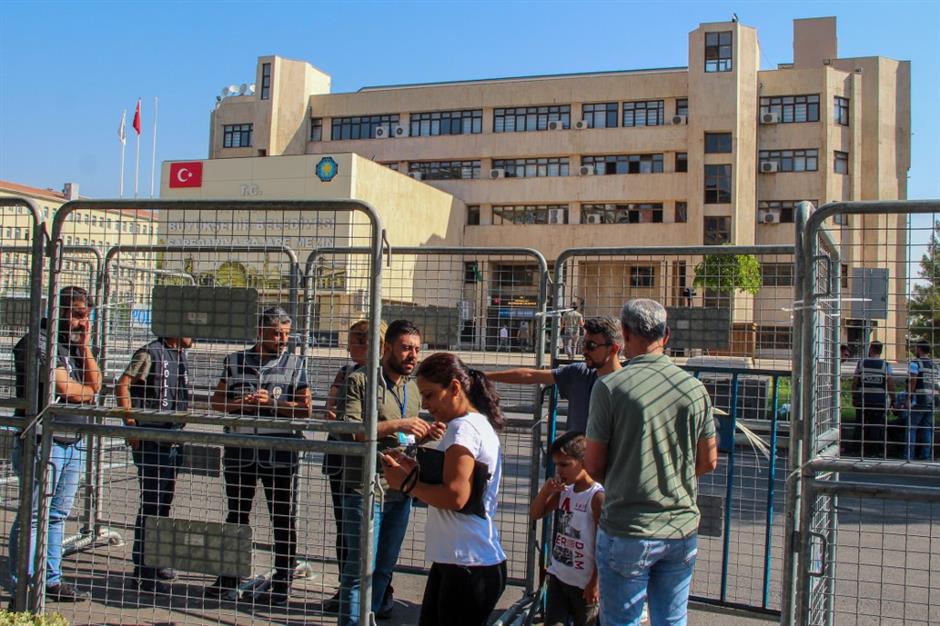 Turkish police officers put barriers and stand guard in front of the Metropolitan Municipality headquarters entrance in Diyarbakir, on August 19, 2019.

Turkish police have also detained 418 people in 29 provinces in an investigation targeting suspects with links to the outlawed Kurdistan Workers' Party, said the ministry.

The mayors of Diyarbakir, Mardin and Van provinces, namely Adnan Selcuk Mizrakli, Ahmet Turk and Bedia Ozgokce Ertan, have been suspended, a statement from the ministry said. The mayors have been replaced by state-appointed governors. The police have been carrying out an operation in the municipalities, local media reported.

The ministry said the PKK exerted heavy efforts to nominate candidates "who would be easily led once they would be elected and would be under its guidance and orientation."

These mayors were elected on March 31 in local elections. "Once the Metropolitan Mayors of Diyarbakir, Mardin and Van Provinces had taken their offices, it was highlighted that they exerted the so-called 'co-mayor' practice upon the instructions of the leaders of the separatist terrorist organization," said the ministry.

The mayors "intended to convert the municipalities into an administrative structure separate from the whole country, they de facto employed the former municipal employees, who had been removed from their offices due to their engagement, affiliation and relation with the terrorist organization," said the statement.

Concerning the ongoing separate investigations and prosecutions on these mayors over alleged terror links, the ministry said that they have been suspended from their duties as an interim precaution for safety and security concerns.

The move is part of the efforts by the Turkish government, which has recently intensified its fight against the PKK in the military level both in Turkey and in northern Iraq.