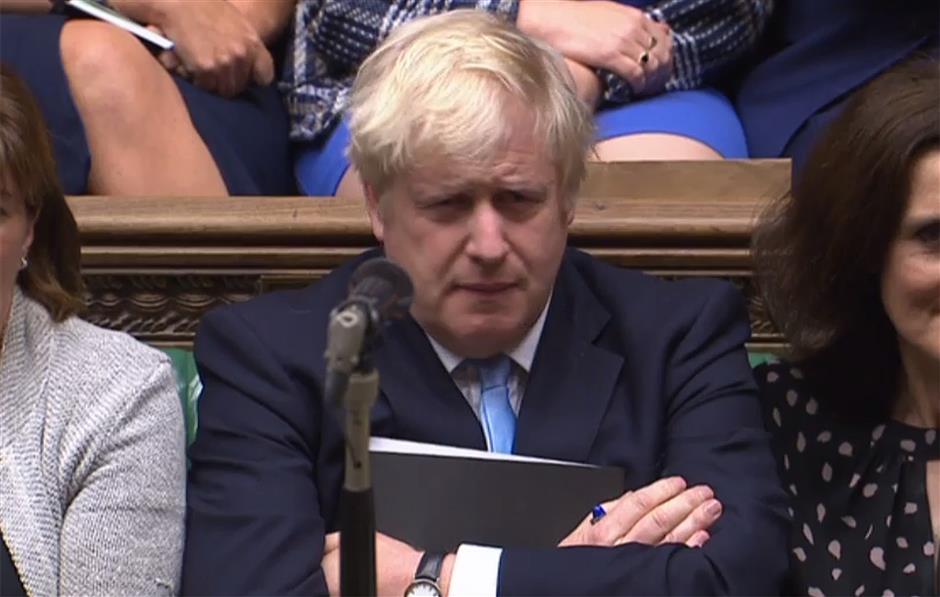 British MPs rejected a second attempt by Prime Minister Boris Johnson on Tuesday to call an early election to break the Brexit deadlock, in a final show of defiance before he controversially suspends parliament.

After a tumultuous few days that exposed Johnson's weakness in the face of hostile lawmakers, the House of Commons again refused to grant a snap poll that might have bolstered his position.

MPs had earlier also voted to demand the government publish confidential documents about Britain's readiness to leave the EU on October 31 without a divorce deal.

Johnson took office in July promising to deliver on the 2016 referendum vote for Brexit, even if that means leaving without exit terms agreed with Brussels.

But many MPs reject a "no deal" divorce and in the past few days have rushed through a law that would force Johnson to delay Brexit if he failed to strike a deal.

Addressing a rowdy chamber late into Monday night, the prime minister told MPs: "I will not ask for another delay."

But having lost his parliamentary majority after a swathe of his own Conservative MPs rebelled over the law, he is running out of options.

The last chance to get a deal to avoid a Brexit delay is at an EU summit starting on October 17.

Some commentators have said Johnson may be forced to resign if he does not want to delay.

In a further sign of the political turmoil, House of Commons Speaker John Bercow, who has championed the rights of MPs to challenge government, announced he was stepping down.

Britons voted by 52 percent to leave the EU in 2016, but after three years of political wrangling, parliament still cannot decide how to implement that decision.

Johnson says he wants to revise the deal agreed by his predecessor, Theresa May, which MPs rejected, but says this requires keeping open the option of walking away.

His wafer-thin majority in the Commons disappeared last week, however, when he expelled 21 of his own Conservative MPs for voting with Labour on the "no deal" legislation.

The bill — which became law on Monday — would force Johnson to delay Brexit to January or even later if he cannot get a deal with Brussels, or persuade MPs to back no deal.

Johnson told Labour leader Jeremy Corbyn: "If you really want to delay Brexit... then vote for an election and let the people decide."

But he needed support of two-thirds of MPs, and as last Thursday, opposition leaders refused, arguing that "no deal" should come off the table first.

Bercow, accused by eurosceptics of being biased against Brexit, warned the government that it could not now ignore parliament as he announced that he will step down by October 31.

"We degrade this parliament at our peril," he warned lawmakers, to a sustained standing ovation from largely opposition MPs.

During an emergency debate, MPs later voted to demand the government publish all documents relating to Operation Yellowhammer, which prepares for "no deal."

They also asked for communications, including WhatsApp messages and private emails, from advisers relating to Johnson's decision to suspend parliament for five weeks.

He says so-called prorogation is a routine move to allow his premiership to launch a new legislative program, but MPs see it as an attempt to silence them and believe the documents will prove this.

A government spokesman said the level of information required was "disproportionate and unprecedented," and it could simply ignores the non-binding motion.

But the vote exposes the lack of trust between MPs and the government, which saw Corbyn call yet another emergency debate on Monday about the importance of ministers upholding the law.

Johnson had earlier visited Dublin for talks with his Irish counterpart Leo Varadkar, a key player in the search for a Brexit deal.

MPs rejected the current agreement three times earlier this year, in large part because of its provisions to keep open the border between British Northern Ireland and EU member Ireland.

Johnson wants to scrap the so-called "backstop" plan, which would keep Britain aligned to EU trade rules long after Brexit, to avoid any checks at the frontier.

But the EU accuses him of offering no alternative.