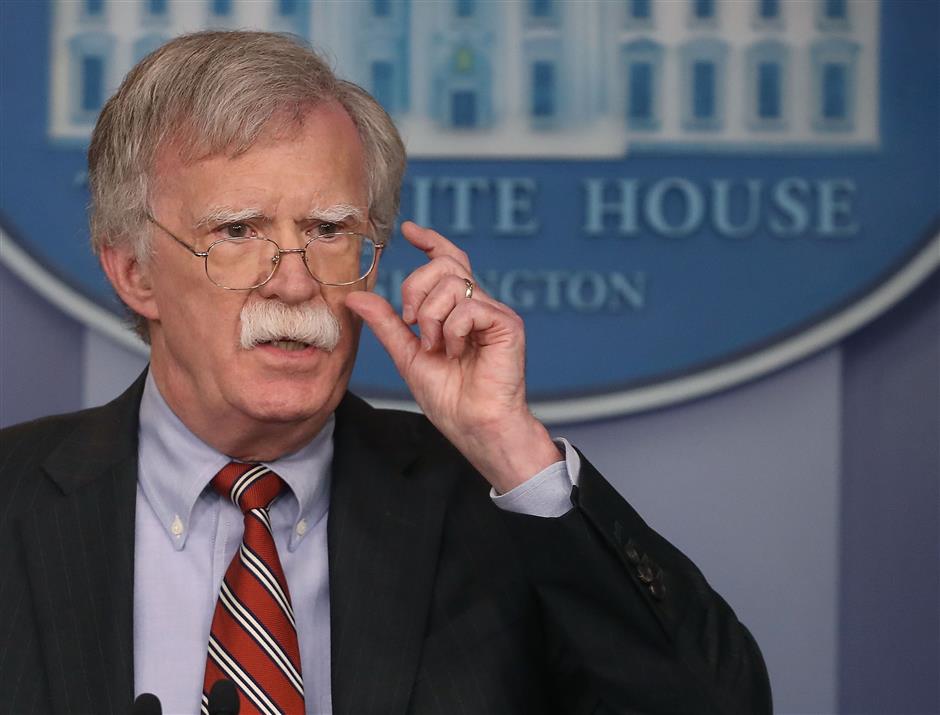 John Bolton offered to resign as National Security Adviser after President Donald Trump informed him that his services are no longer needed.

President Donald Trump on Tuesday announced the firing of hawkish national security adviser John Bolton, a move widely seen as boosting the president's push to negotiate with US foes in Afghanistan, the Democratic People's Republic of Korea and other trouble spots.

Trump, who said he had disagreed "strongly" with Bolton on policy, announced via Twitter: "I asked John for his resignation, which was given to me this morning."

A replacement — the White House's fourth national security chief in less than three years — would be named next week, Trump said.

Bolton, who had been scheduled to give a press conference at the White House on an unrelated matter, denied being fired and insisted that he had resigned.

The news, coming days after Trump caused uproar by revealing he was canceling secret talks with Afghanistan's Taliban, stunned Washington.

Bolton is a veteran and controversial figure closely linked to the invasion of Iraq and other aggressive US foreign policy decisions. He had been seen as one of the main driving forces in the White House's muscular approach to Iran, the DPRK, Venezuela and elsewhere.

Famous for his large moustache and ever-present yellow legal pad, the hardline former US ambassador to the United Nations had pushed back against Trump's dramatic, though so far stumbling, attempts to negotiate with the Taliban and DPRK leader Kim Jong Un.

According to US media reports Trump's extraordinary but failed bid to fly Taliban leaders into the presidential retreat at Camp David last weekend sparked a major, final row.

Secretary of State Mike Pompeo cautioned that Bolton's exit should not be interpreted as heralding strategy changes.

"I don't think any leader around the world should make any assumption that because someone of us departs that President Trump's foreign policy will change in a material way," Pompeo told reporters.

But when asked if Trump was still open to meeting his Iranian counterpart Hassan Rouhani at the United Nations General Assembly this month — an event that would be as ground breaking as his proposed Taliban talks — Pompeo said "sure."

As so often in the Trump presidency, the handling of the abrupt reshuffle appeared chaotic.

Bolton joins a stack of senior officials to have come and gone during the Republican businessman's tumultuous first term in office.

Trump, who has a habit of announcing major domestic and international news on his personal Twitter account, revealed the latest sacking at around midday. He said that he'd informed Bolton of his decision Monday night.

The White House press office, however, seemed unaware. It sent out a message announcing that Bolton would shortly be giving a press conference on terrorism issues alongside Pompeo.

Bolton disputed Trump's version of events, saying that the president had not fired him in person, as he claimed, late Monday.

A Fox News television reporter said Bolton texted him to say: "Let's be clear, I resigned."

Mnuchin, one of the Trump administration's most senior figures, called a reporter's question about whether the national security team was in chaos "ridiculous."

Trump came into office promising to extricate the United States from military entanglements. Bolton was often seen as offering a hawkish counterbalance, which Trump would then take into consideration.

"He has strong views on things but that's okay. I actually temper John, which is pretty amazing," Trump said in May.

Trump "has had two voices whispering in his ears: the one counseling diplomacy and warning against conflict, the other recommending belligerence," he said.

"With Bolton gone, the second voice undeniably has lost its loudest proponent."

Prominent Republican Senator Rand Paul agreed, tweeting: "The President has great instincts on foreign policy and ending our endless wars. He should be served by those who share those views."

Democratic Senator Jack Reed said that "Bolton was wrong for this job," but added that removing him "isn't going to fix the failures plaguing this administration's dysfunctional foreign policy."

Reeed described the White House as being "in constant turmoil."

Pompeo said he did not want to discuss palace intrigue in the Trump administration.

However, he admitted what many had been saying for months: "There were many times Ambassador Bolton and I disagreed, that's to be sure."

"Bolton is a hyper-hawk. He was influential, and his removal will at least temper some administration policies," the Eurasia Group consultancy said.