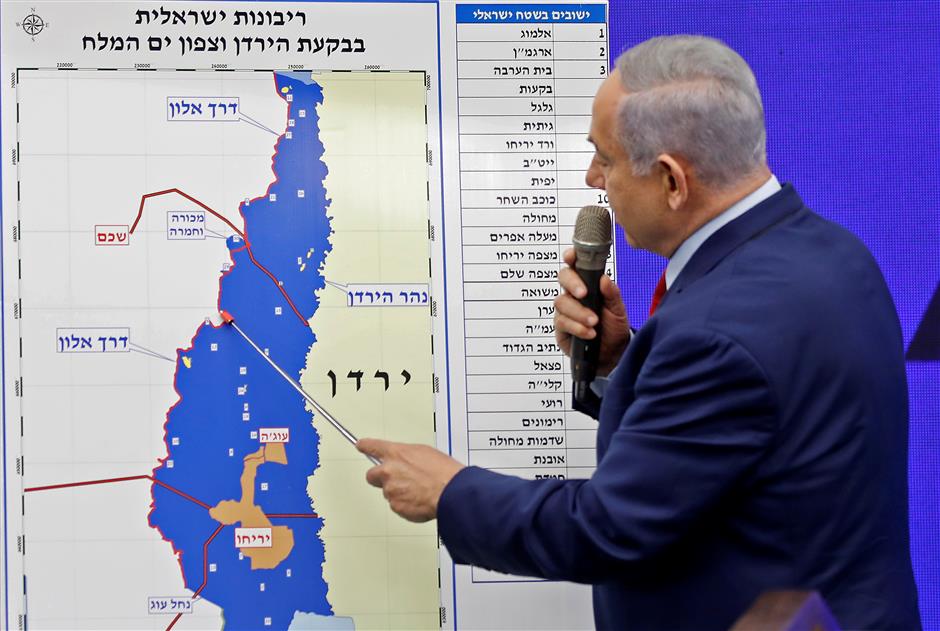 Israeli Prime Minister Benjamin Netanyahu points at a map of the Jordan Valley as he gives a statement in Ramat Gan, near the Israeli coastal city of Tel Aviv, on September 10, 2019.

Israeli Prime Minister Benjamin Netanyahu said on Tuesday that he will annex the Jordan Valley in the occupied West Bank right after Israel's September 17 election, if he wins re-election.

"I intend to apply Israeli sovereignty over the Jordan Valley and the northern Dead Sea immediately after the elections," Netanyahu said in a televised speech, surrounded by the ministers from his Likud party.

He added that the move will be the "first step" towards a broader annexation of the Palestinian territories of West Bank, which would be made after US President Donald Trump presents the US plan for the Israeli-Palestinian peace, also known as the "Deal of the Century."

Trump has postponed several times the publication of the peace plan, but Netanyahu said it would be published "soon after the elections, perhaps even days."

Israeli media reported that Netanyahu had updated Trump on his statement in advance.

Such a move would be a major shift from Israel's long-held policy and is expected to trigger strong protests from the Palestinians.

Netanyahu is on a re-election campaign and such remarks are meant to please his right-wing electoral base.

Before Israel's April elections, Netanyahu vowed to annex the West Bank but did not move to implement it.

Israel seized the West Bank and Gaza Strip in the 1967 Middle East war and has kept its control ever since.

The Palestinians wish to establish an independent state along the 1967 border with East Jerusalem as its capital.

Currently, about 400,000 Jewish settlers live in some heavily guarded communities in the West Bank among some 2.8 million Palestinians.