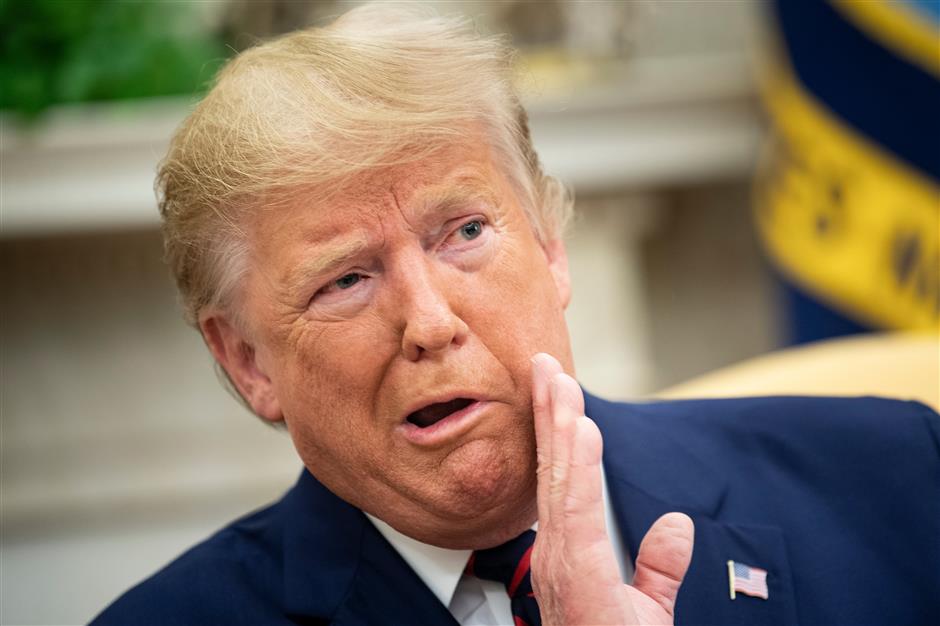 US President Donald Trump speaks to the press during a meeting with President of Finland Sauli Niinisto at the White House October 2, 2019, in Washington, DC.

US President Donald Trump on Wednesday used a series of harshly-worded tweets as well as the stage of a joint press conference with the visiting Finnish president to defend himself against the ongoing impeachment inquiry.

"This is a hoax," Trump said of the impeachment inquiry during the joint press conference with Finnish President Sauli Niinisto at the White House. "This is the greatest hoax."

The impeachment inquiry, announced by House Speaker Nancy Pelosi on September 24, stemmed from a whistleblower complaint alleging that Trump had pressured Ukrainian President Volodymyr Zelensky during a July 25 phone call to investigate Joe Biden, Democratic presidential candidate for the 2020 election, as well as issues related to alleged Russian interference in the 2016 election.

Pelosi and House Intelligence Committee Chairman Adam Schiff held a press conference earlier on Wednesday, at which Pelosi said her chamber had "no choice but to go forward" with the impeachment proceedings.

Schiff, for his part, said the White House's attempt to stonewall the investigations currently being undertaken by six House committees "will be considered further evidence of obstruction of justice."

Trump said the impeachment inquiry was "a fraudulent crime on the American people." He added that he would work with "shifty Schiff and Pelosi and all of them... because... I had a great call with the president of Ukraine."

Trump asked Zelensky on the phone to cooperate with his personal attorney Rudy Giuliani and Attorney General William Barr to investigate a Ukrainian gas company that might be related to Biden, the former vice president of the United States, and his son, Hunter Biden, according to a rough transcript of the call released Sept. 25 by the White House.

Holding in his hands a copy of a New York Times report on Wednesday saying Schiff got an early account of the whistleblower's accusations, Trump said at the press conference that it was a "scandal" that Schiff knew the whistleblower complaint before it was filed. "I'd go a step further -- I think he probably helped write it. OK? That's what the word is," he added.

Trump wrote in an earlier tweet that "completely fabricated my words (with Zelensky) and read them to Congress as though they were said by me."

House Oversight and Reform Committee Chairman Elijah Cummings notified committee members in a memo Wednesday that the panel, in consultation with the Intelligence and Foreign Affairs committees, will issue a subpoena to the White House on Friday, requesting Ukraine-related records.

The three committees have already subpoenaed Secretary of State Mike Pompeo, and Giuliani, who the whistleblower complaint claimed a central figure in the administration's dealings with Ukraine. The two were asked to submit related documents.