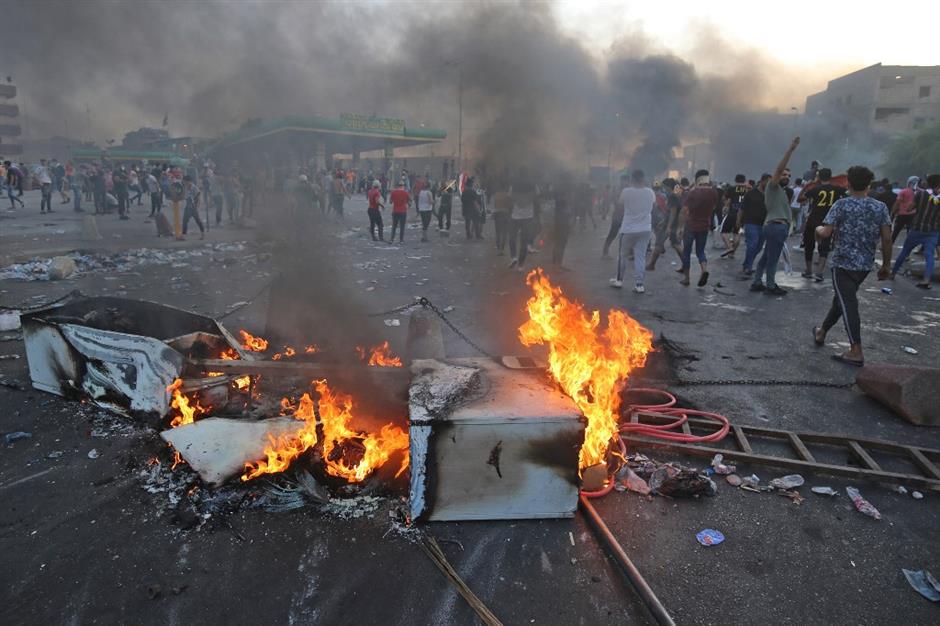 Iraqi protesters burn objects to block the road during clashes amidst demonstrations against state corruption, failing public services, and unemployment in the Iraqi capital Baghdad's central Tayeran Square on October 3, 2019.

The death toll in three days of protests in Iraq climbed to 38 and more than 1,648 people were wounded, a member of the Iraqi human rights body said on Friday.

Ali al-Bayati, a member of the Iraqi Independent High Commission for Human Rights (IHCHR), told reporters that the death toll of violence that accompanied the protests during the three days in Baghdad and some provinces rose to 38 people, including two members of the security forces.

He said that up to 1,648 people were wounded, including 360 security members, pointing out that most of them have left the hospital after receiving treatment.

The IHCHR is an independent commission which is linked to the Iraqi parliament. It was established by UN agencies in Iraq in cooperation with the Iraqi government to promote and protect the rights of all Iraq's people according to international standards.

The demonstrations erupted in the capital Baghdad and several provinces across Iraq over unemployment, government corruption and the lack of basic services.

The demonstration turned violent in Baghdad as clashes erupted with the police.

The protests also spread to other Iraqi provinces when hundreds of protesters attacked and burned several provincial government buildings and offices of leading political parties.

On Thursday, sporadic protests continued during the day despite the curfew that was imposed in Baghdad starting from 5:00 a.m. local time (0200 GMT) Thursday morning.

The Iraqi Defense Minister Najah al-Shammari said in a statement on Wednesday that he has decided to raise the state of alert for the Iraqi armed forces "to preserve state sovereignty and protect all foreign embassies and diplomatic missions operating in Iraq."