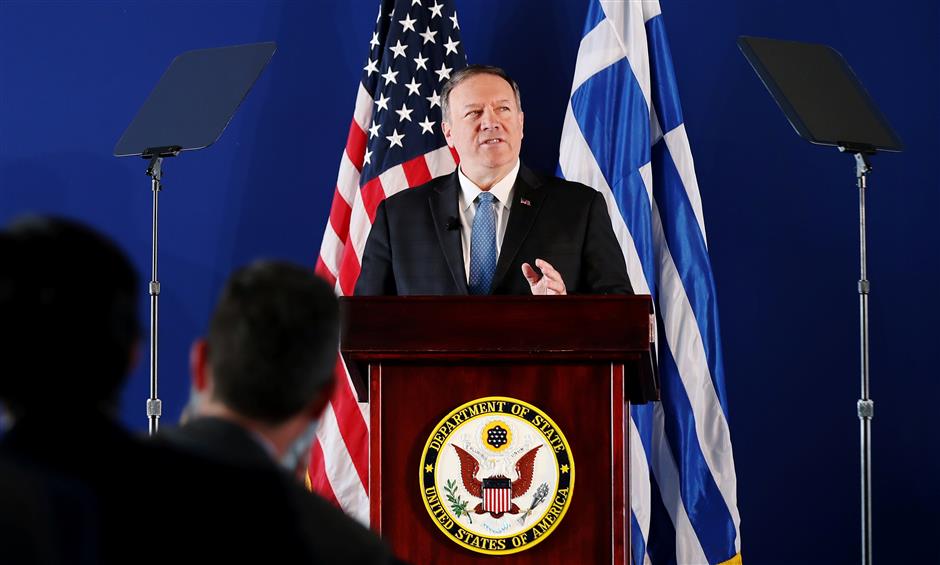 US Secretary of State Mike Pompeo delivers a speech at the Stavros Niarchos Foundation Cultural Center in Athens on October 5, 2019.

A US House panel official said Saturday that Secretary of State Mike Pompeo failed to submit documents related to the Trump administration's dealings with Ukraine before the Friday deadline set by a congressional subpoena sent earlier to him.

The official, according to US media reports, is with the House Foreign Affairs Committee, which issued the subpoena on September 27 in consultation with the Intelligence and Oversight and Reform committees.

Pompeo said the State Department has given an "initial response" to the committees' request for documents, pledging full cooperation within the law.

"The State Department sent a letter last night to Congress, which is our initial response to the document request. We will obviously do all the things we are required to by law," the top US diplomat said Saturday at a news conference in Athens, Greece.

"As for the question of the appropriateness of the investigation I think it's very clear... there's clearly politics involved in this," he added.

The subpoena is part of an ongoing impeachment inquiry by House Democrats into President Donald Trump over his July 25 phone call with the Ukrainian president, during which investigators believed he pressured his counterpart to probe Democratic presidential candidate Joe Biden and his son Hunter Biden, as well as issues related to alleged Russian interference in the 2016 election.

Trump insisted that he had put no pressure on Ukrainian President Volodymyr Zelensky. He called the impeachment proceedings "another witch hunt" against him.

In addition to Pompeo, the committees have also subpoenaed Trump's personal attorney Rudy Giuliani and the White House. They have asked Vice President Mike Pence for Ukraine-related documents as well.