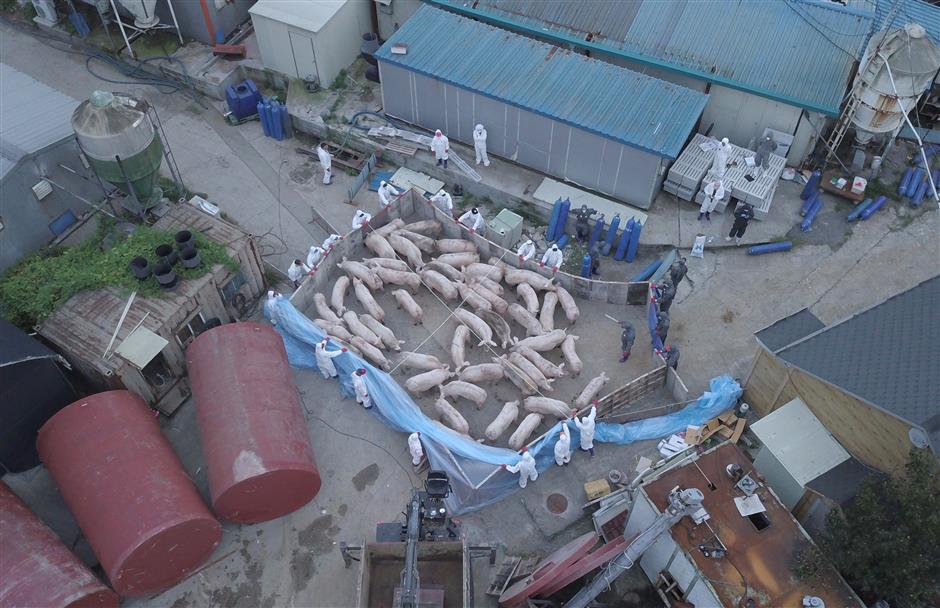 An aerial photo shows workers wearing protective suits and driving pigs to kill at a farm where pigs were confirmed to have been infected with African swine fever in Paju, a city near the inter-Korean border, on September 17, 2019.

South Korea issued a 48-hour standstill order on Thursday after confirming the 14th case of African swine fever the previous day, according to the Ministry of Agriculture, Food and Rural Affairs.

The 14th outbreak was found at a pig farm in Yeoncheon, Gyeonggi province, after a hiatus of five days. The county is located north of the capital Seoul, adjacent to the border with the Democratic People's Republic of Korea.

Following the confirmation, the agriculture ministry issued a standstill order, which would be effective on Thursday and Friday, in a bid to ban all pigs, relevant equipment and people at pig farms from moving outside.

All the confirmed cases have been spotted in areas north of Seoul, near the inter-Korean border. Other suspected cases reported in areas south of Seoul tested negative.

From the Yeoncheon county, the second confirmed case was found on September 18. The first-ever case was spotted on September 17 from the northwestern border city of Paju.

With the 14th outbreak of the viral animal disease, which found no cure nor vaccines yet, the quarantine authorities would be required to slaughter over 150,000 pigs, or about 1.5 percent of the total pigs being raised in the country.

The quarantine authorities have culled pigs within a 3-km radius of the affected farms, larger than the required 0.5-km radius.

A possibility remained open for additional cases of the deadly viral disease to be found, given the incubation period of up to 19 days.