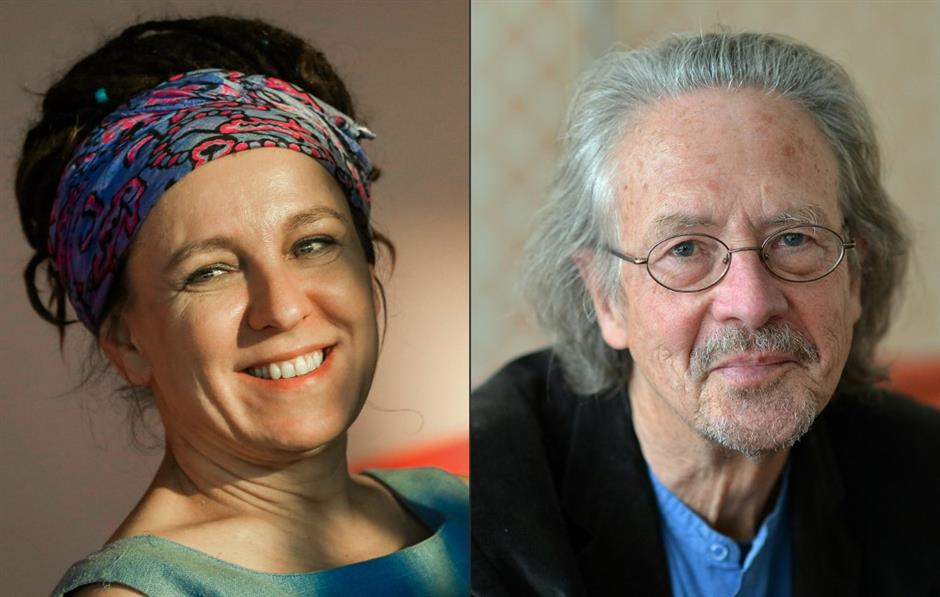 This combination of pictures created on October 10, 2019 shows Polish author Olga Tokarczuk (L) on September 17, 2018 in Krakow and Austrian novelist and playwright Peter Handke on November 22, 2012 in Salzburg, Austria.

Polish writer Olga Tokarczuk on Thursday won the 2018 Nobel Literature Prize, which was delayed over a sexual harassment scandal, while Austrian novelist and playwright Peter Handke took the 2019 award, the Swedish Academy said.

Experts had predicted the Academy would go to great pains to steer clear of controversy with its pick of laureates, as it seeks to restore its reputation tainted by the scandal.

But Handke, 76, was quickly seen as a divisive choice for his pro-Serb support in the Balkan wars.

Tokarczuk, 57, considered the most talented Polish novelist of her generation, was honoured "for a narrative imagination that with encyclopaedic passion represents the crossing of boundaries as a form of life".

She told Swedish Radio she "couldn't believe" she had won, and was pleased to share it with Handke, "my favourite writer".

"It looks like central Europe is still alive despite all those political problems in our part of the world, and we still have something to say to the world," she said.

Tokarczuk's books portray a polychromatic world perpetually in motion, with characters' traits intermingled and language that is both precise and poetic.

Her first novel, "The Journey of the People of the Book," released in 1993, chronicles a failed expedition to find a mysterious book.

The daughter of a school librarian, she won the Booker International Prize along with her translator Jennifer Croft for her 2007 novel "Flights", whose English version came out in 2017.

Her 900-page "The Books of Jacob", which the Swedish Academy hailed as her "magnum opus", spans seven countries, three religions and five languages, tracing the little-known history of Frankism, a Jewish messianic sect that sprang up in Poland in the 18th century.

Released in 2014, its pages are numbered in reverse in the style of Hebrew books.

The Academy called it a "remarkably rich panorama of an almost neglected chapter in European history."

Handke meanwhile was honoured "for an influential work that with linguistic ingenuity has explored the periphery and the specificity of human experience," the Academy said.

Ironically, in 2014 Handke called for the Nobel Literature Prize to be abolished, saying it brought its winner "false canonisation".

The son of a German soldier he only met in adulthood, Handke "has established himself as one of the most influential writers in Europe after the Second World War," the Academy said.

His works are filled with a strong desire to discover and to make his discoveries come to life by finding new literary expressions for them, it added.

Handke stoked controversy when he attended former Serbian president Slobodan Milosevic's funeral in 2006, and expressed sympathy for the Serbs in the 1990s Yugoslav wars.

He has also described Thomas Mann, a giant of German literature and a 1929 Nobel laureate, as a "terribly bad writer" churning out "condescending, snotty-nosed prose".

Tokarczuk and Handke — who both told the Academy they would attend the prize ceremony in Stockholm on December 10 — will each take home a cheque worth nine million kronor (US$912,000, 828,000 euros).

Tokarczuk becomes just the 15th woman to have won the prestigious distinction, out of 116 literature laureates honoured since 1901.