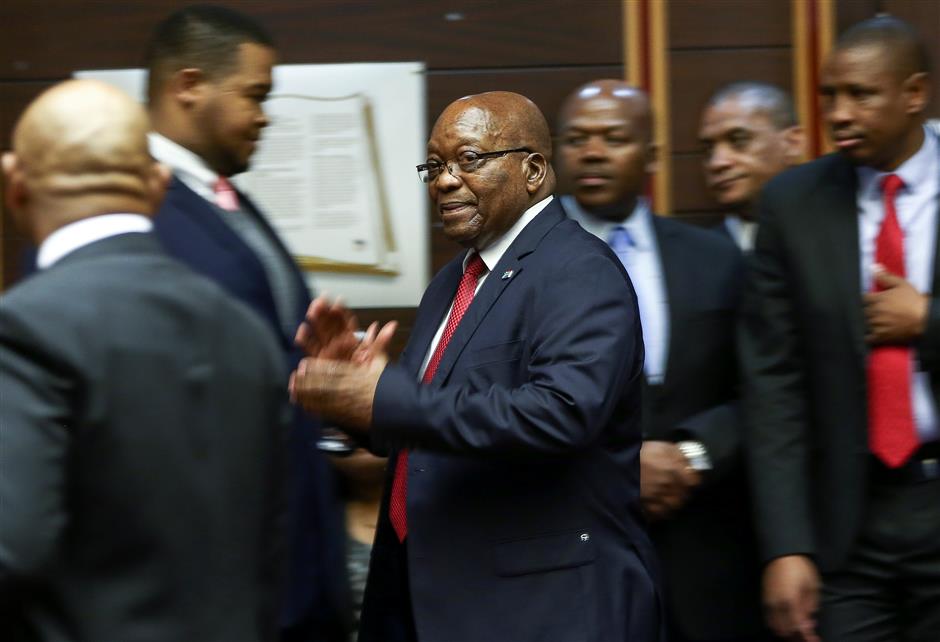 Former South African President Jacob Zuma is pictured at the High Court, where he is seeking a permanent stay of prosecution on charges of corruption, in Pietermaritzburg on October 11, 2019.

The Pietermaritzburg High Court in KwaZulu-Natal Province announced that all three judges - Jerome Mnguni, Esther Steyn and Thoba Poyo-Dlwati - were unanimous in meting out the judgement.

Zuma's application was dismissed with costs, the court said.

With the ruling, the long-awaited graft trial against Zuma will go ahead.

The charges are related to a multi-billion-rand arms deal with European countries in the late 1990s, which Zuma has completely denied.

The prosecution alleges that Zuma took advantage of his position in the government to help businessman Schabir Shaik in his commercial dealings.

Shaik was convicted in 2008 to 15 years in prison for his involvement in facilitating a bribe for Zuma from French arms manufacturer Thint in exchange for political protection during the investigation into the arms deal.

But corruption charges against Zuma were dropped in the early 2000s and paved the way for Zuma to become president in 2009.

The opposition Democratic Alliance welcomed Friday's ruling, saying that with the judgement, Zuma would eventually have to face his day in court.

"The arc of the moral universe is often said to be long, but ultimately bending toward justice," the party said.

The DA said it will not rest until justice has been done.

The DA believes that Zuma has a case to answer, said Glynnis Breytenbach, DA Shadow Minister of Justice and Constitutional Development.

"We have been at the forefront of the fight to make sure that he is not allowed to escape accountability, despite his best attempts to interfere with the workings of the NPA, said Breytenbach.

If Zuma, 77, wants to appeal the decision, he will have to do so within the next 15 days.