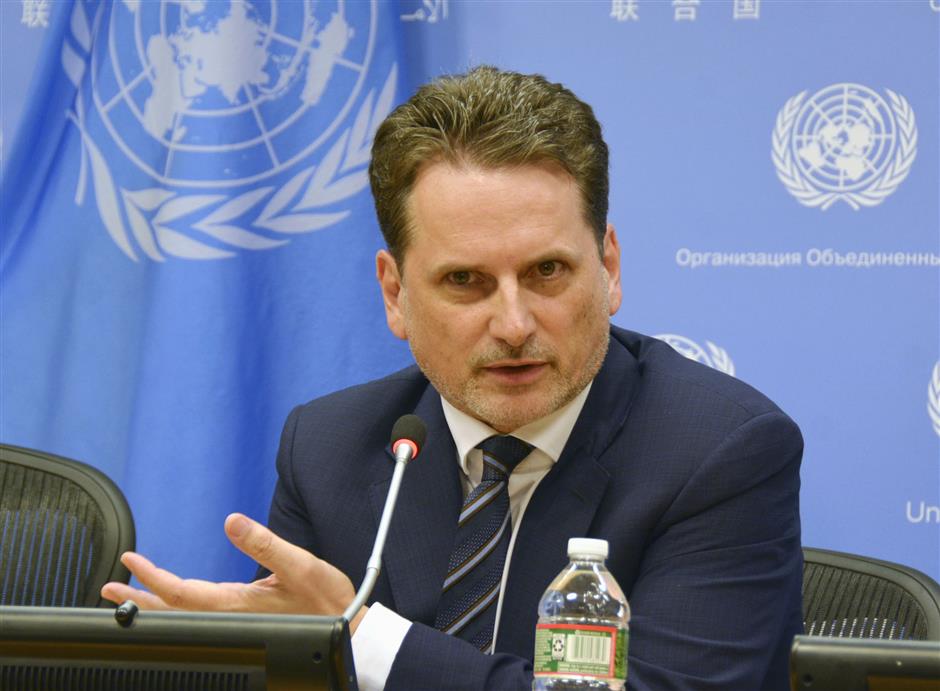 The head of the UN relief agency for Palestine refugees (UNRWA), Pierre Krahenbuhl, who was under investigation, has resigned, said a spokesman for UN Secretary-General Antonio Guterres on Wednesday.

"A short while ago, UNRWA's Commissioner-General Pierre Krahenbuhl informed the secretary-general that he was resigning, effective immediately," Stephane Dujarric, the spokesman, told reporters.

The United Nations announced earlier Wednesday that Guterres had put Krahenbuhl "on administrative leave" after an internal oversight report found managerial issues against him.

"At this time, it is vital that member states and other partners remain committed to UNRWA and the services it provides. It is also critical for the international community to support the crucial work performed by the agency in the areas of health, education, and humanitarian assistance, which is a source of stability in a volatile region."

A press release posted on UNRWA's official website said the UN secretary-general's office announced that the Office of Internal Oversight Services had completed a part of the ongoing inquiry into UNRWA management-related matters.

Over the last few months, UNRWA has initiated an internal review of its governance, management and accountability functions, so as to ensure it practices the highest standards of professionalism, transparency and efficiency, said the press release.

The review revealed a number of areas which required strengthening, and the agency has already commenced corrective action and will be pursuing further initiatives and improvements over the coming months, said the press release.

"UNRWA is grateful for the critical support of UN member states and other partners around the world and is committed to ensuring donor funds are utilized in the most efficient and effective manner in support of the agency's critical mission," it said.

"The secretary-general calls upon donors and partners to commit to the transfer critical funding payments to enable UNRWA to bridge its significant financial deficit and ensure it is able to carry out its unique and vital role in serving over 5.5 million Palestine refugees."

UNRWA is confronted with an increased demand for services resulting from a growth in the number of registered Palestine refugees, the extent of their vulnerability and their deepening poverty.

UNRWA is funded almost entirely by voluntary contributions and financial support has been outpaced by the growth in needs. As a result, the UNRWA program budget, which supports the delivery of core essential services, operates with a large shortfall. UNRWA encourages all member states to work collectively to exert all possible efforts to fully fund the agency's program budget.

UNRWA, whose official name is the UN Relief and Works Agency for Palestine Refugees in the Near East, currently helps more than 5 million Palestine refugees and their descendants in Jordan, Lebanon, Syria as well as West Bank and Gaza.

The agency was confronted with its most severe funding crisis in 2018 after the United States, traditionally the largest donor, suddenly cut its funding before it completely stopped its support.