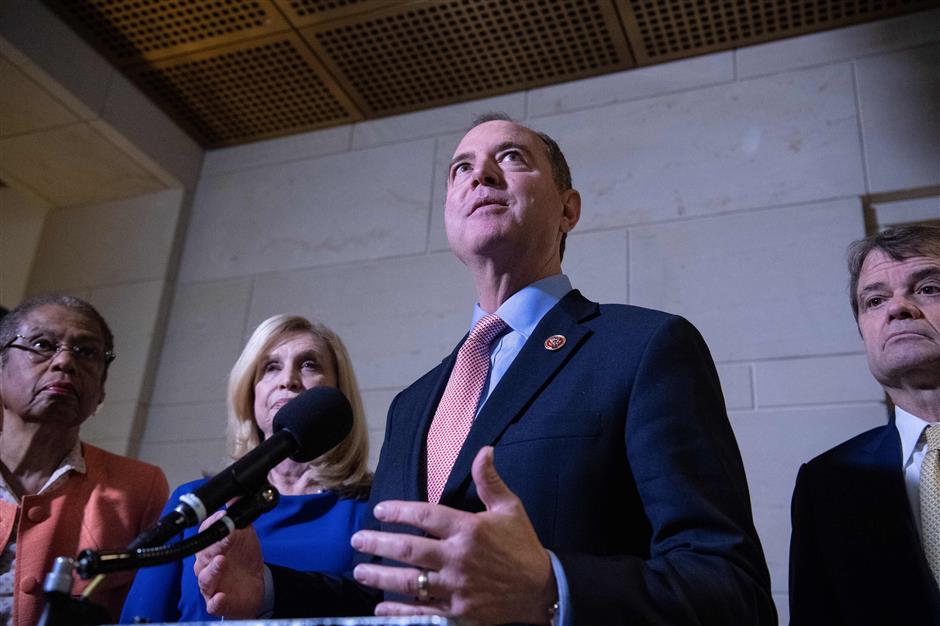 US House Intelligence Committee chairman Adam Schiff speaks to the press with other lawmakers following a closed hearing with Under Secretary of State for Political Affairs David Hale as part of the impeachment inquiry at the US Capitol in Washington, DC, on November 6, 2019.

The first open impeachment hearings into US President Donald Trump will begin next week, the congressman leading the probe said Wednesday, as the investigation heads into a highly anticipated public phase.

People will be able to see "the degree to which the president enlisted whole departments of government in the illicit aim of trying to get Ukraine to dig up dirt on a political opponent," said House Intelligence Committee chairman Adam Schiff.

In a closed-door deposition, Taylor bolstered the principal accusation against Trump — that the president abused his office by withholding military aid to blackmail Kiev into launching investigations that could help him politically.

Kent, who heads the European and Eurasian bureau at the State Department, expressed concerns about White House efforts to remove the then-ambassador to Ukraine, Marie Yovanovitch.

Yovanovitch herself told investigators she was ousted because Trump's personal lawyer Rudy Giuliani and others wanted her out of the way as they conducted Ukraine policy outside traditional diplomatic channels. She is scheduled to appear next Friday.

Schiff has already begun releasing transcripts of private witness testimony but it is widely believed that the trio's appearance at public hearings could have a more dramatic impact on the American public.

The Capitol Hill hearings will be broadcast live as lawmakers from both parties and trained staff question witnesses, many of whom the White House has sought to discredit.

Republican lawmakers have spent weeks accusing Democrats of holding "sham" secret hearings in the US Capitol basement and demanding a more open process.

Schiff said that moment in the fast-moving inquiry had arrived, and that Americans would be able to hear the accounts of potential abuse of power directly from witnesses who were caught up in the scandal.

The hearings will let the American people "evaluate the witnesses for themselves, to make their own determinations about the credibility of the witnesses, but also learn first-hand about the facts of the president's misconduct," Schiff said.

An anonymous whistleblower complaint in September highlighted potential abuse of power by the president when he telephoned Ukraine's leader and asked him to investigate former vice president Joe Biden, Trump's potential 2020 election rival.

The complaint led Democrats to launch their impeachment inquiry, which has led to an avalanche of witness testimony from current and former diplomats or administration officials who have largely corroborated the whistleblower's account.

Trump has attacked the complaint as "phony" and has demanded the whistleblower's identity be revealed.

Trump loyalists in Congress have been disparaging the impeachment process, as House Minority Leader Kevin McCarthy sought to do after Schiff's announcement.

"Don't be fooled. Public hearings are not the same as FAIR hearings," McCarthy tweeted.

Next week's marquee appearance may well be by Taylor, whose full testimony transcript was made public Wednesday by Schiff.

It painted a damning picture of Trump offering a quid pro quo. According to the testimony, his administration conditioned both military aid and a sought-after Ukraine meeting with Trump on Kiev's willingness to launch an investigation of Burisma, a Ukrainian energy firm connected to Biden's son.

Taylor told investigators that it was "my clear understanding, security assistance money would not come until the president [of Ukraine] committed to pursue the investigation."

"Are you aware that quid pro quo literally means this for that?" an investigator asked, according to the transcript.

In testimony to investigators revealed last month, he expressed grave concerns about the Trump administration's "irregular, informal channel of US policy-making" and its pressure on Ukraine to announce a Burisma investigation.

Taylor said a US diplomat involved in the shadow diplomacy, Ambassador to the European Union Gordon Sondland, told him that "everything," including military aid, depended on Ukraine's Biden probe.

While several witnesses have already testified, the White House continues its stonewalling efforts.

Democrats summoned the highest-ranking White House official yet, acting chief of staff Mick Mulvaney, to testify this week, although he is highly likely to refuse.

Mulvaney publicly stated last month that the decision to freeze aid was tied to the demand for investigations of Democrats. He later walked back those comments.