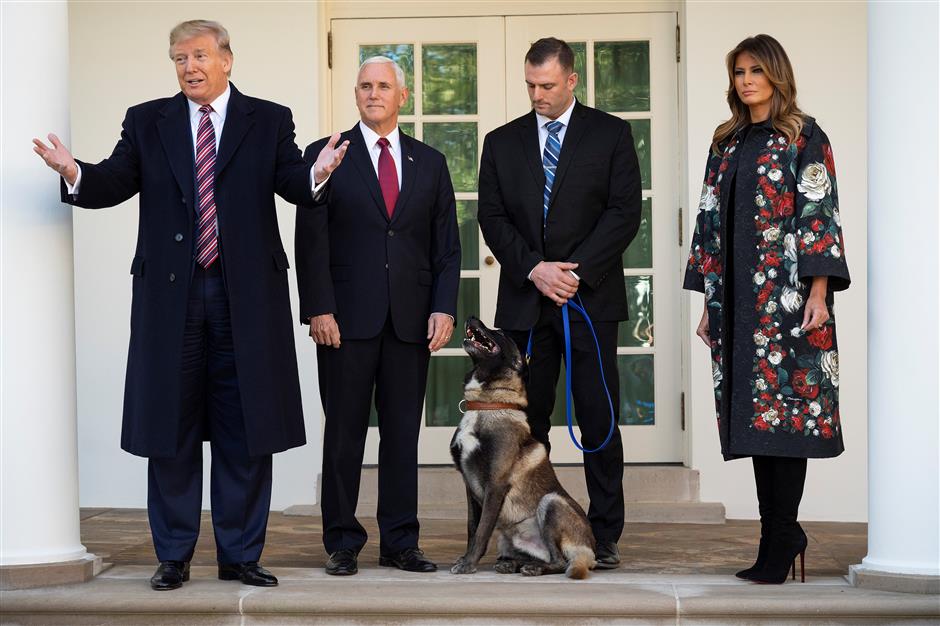 US President Donald Trump (left), Vice President Mike Pence (second left) and First Lady Melania Trump stand with Conan, the military dog that was involved with the death of IS leader Abu Bakr al-Baghdadi, at the White House in Washington, DC, on November 25.

President Donald Trump on Monday publicly introduced Conan, the dog that became a hero for its role in the US raid that led to the death of Islamic State group leader Abu Bakr al-Baghdadi.

"The dog is incredible," Trump said at a brief ceremony as the Belgian Malinois sat beside him with a handler. Also present were First Lady Melania Trump and Vice President Mike Pence.

"So brilliant, so smart. Conan did a fantastic job," Trump added.

In the raid last month, Conan chased al-Baghdadi into a dead-end tunnel in his Syrian hideout, where the cornered IS leader detonated a suicide vest, killing himself and two children, according to the US account.

Conan was injured by the electric cables exposed in the detonation but seems to have made a full recovery.

"Conan was very badly hurt, as you know. They thought maybe he was not going to recover. He recovered actually very quickly and has since gone on very important raids," Trump said.

The dog's identity had been a closely guarded secret until it was declassified by Trump, who retweeted a picture of the pooch after the raid at Baghdadi's lair.

Details about Conan's life, achievements and family background are scant, although he certainly comes from good stock: US Navy SEALs used a Belgian Malinois in the 2011 raid in Pakistan that killed Al-Qaeda leader Osama bin Laden.

The head of US Central Command, General Kenneth McKenzie, has said Conan was a "critical member of our forces" and mentioned his impressive record of 50 combat missions in four years of service.