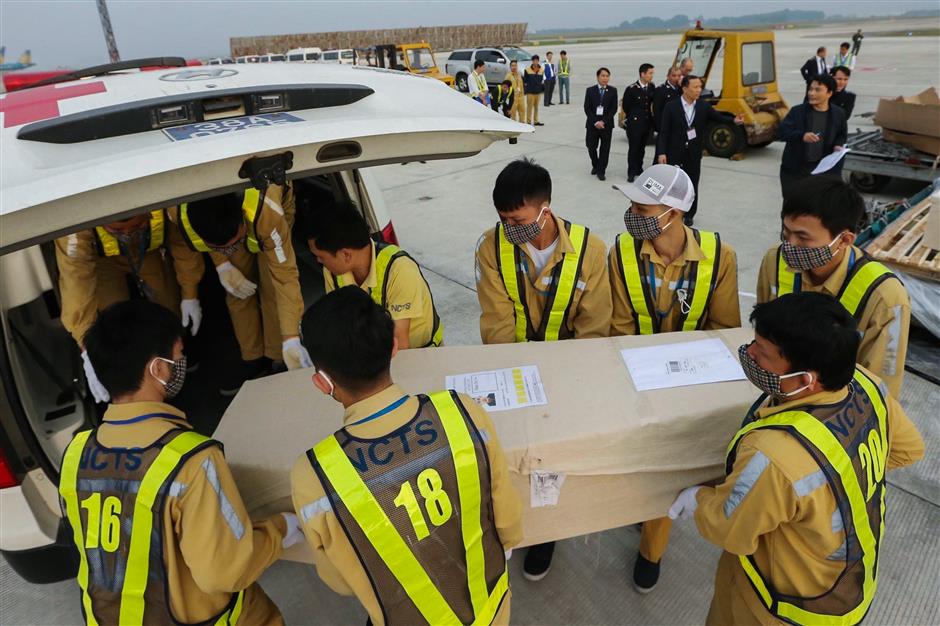 This picture from the Vietnam News Agency taken and released on November 27, 2019, shows ground personnel of Noi Bai International Airport carrying a casket containing the remains of one of the Vietnamese victims to an ambulance in Hanoi.

Bodies of 16 victims among the 39 Vietnamese dead in the Essex lorry incident arrived at the Noi Bai International Airport in Hanoi on Wednesday morning, Vietnam News Agency reported.

This is the first repatriation of the bodies and remains, with victims coming from three localities of central Nghe An, Ha Tinh and Quang Binh province. Upon arrival at the airport, the 16 bodies were handed over to representatives of localities to be transported home.

Authorities of Vietnam and Britain are closely working together to soon repatriate other remains in later trips, according to the agency.

Earlier, Vietnamese deputy foreign minister Bui Thanh Son said that the government would advance funds to ensure the bodies and remains are brought home soon. The victims' families would then refund the government.

According to Son, most of the victims' families wanted to receive the bodies and few prefered to receive cremated remains.

The fee to bring ashes to Noi Bai International Airport in Hanoi city is 1,370 pounds (US$1,771), while body repatriation in a zinc coffin costs up to 2,208 pounds, according to the Vietnamese Ministry of Foreign Affairs.

All 39 people found dead in a refrigerated lorry in the British county of Essex in October were confirmed to be Vietnamese nationals. They had permanent residence in northern Hai Phong City, northern Hai Duong province and central provinces of Nghe An, Ha Tinh,Quang Binh and Thua Thien Hue, according to Vietnamese Ministry of Public Security.