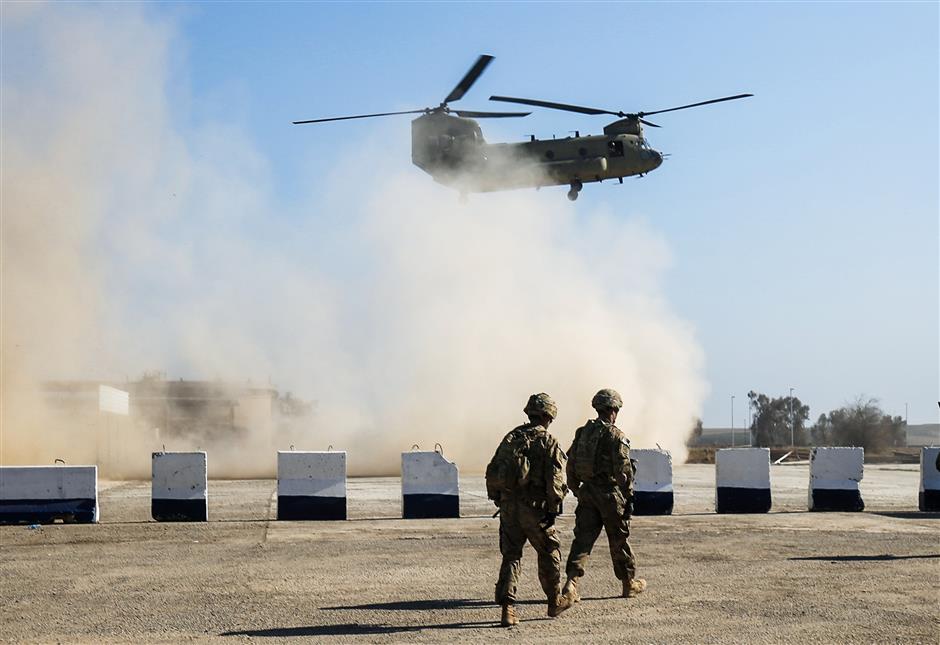 In this file photo taken on February 22, 2017, US troops walk as a US C-47 Chinook helicopter flies over the village of Oreij, south of Mosul.

US State Department said on Friday that any US officials going to Iraq would not discuss US forces withdrawal, rejecting the Iraqi government's earlier request that the two sides start to work on such a process.

"At this time, any delegation sent to Iraq would be dedicated to discussing how to best recommit to our strategic partnership -- not to discuss troop withdrawal, but our right, appropriate force posture in the Middle East," State Department Spokesperson Morgan Ortagus said in a statement.

US military presence in the country is to continue the fight against the Islamic State and to protect Americans, Iraqis and coalition partners, the statement said.

The statement followed a phone conversation earlier in the day between Iraq's caretaker Prime Minister Adel Abdul Mahdi and US Secretary of State Mike Pompeo, during which the former requested Washington "to send delegates to Iraq to lay down mechanisms for implementing the Iraqi parliament resolution to withdraw (foreign) forces safely from Iraq," according to Iraqi government.

The phone call came amid immense tensions between Iran and the United States on Iraqi soil.

The Iraqi parliament on Sunday passed a resolution requiring the government to end the presence of foreign forces in Iraq, two days after the US killing of Qassem Soleimani, former commander of the Quds Force of Iran's Islamic Revolution Guards Corps, near Baghdad airport.

On Wednesday, Iran retaliated by launching 16 ballistic missiles on two military bases housing US troops in Iraq, which US President Donald Trump said caused no American or Iraqi casualties.

Trump threatened to impose harsh sanctions on Iraq if Baghdad and Washington fail to solve the pullout issue on "a very friendly basis."

"We have a very extraordinarily expensive air base that's there. It costs billions of dollars to build ... We're not leaving unless they pay us back for it," he added.

Roughly 5,000 US troops have been deployed in Iraq to support the Iraqi forces in the battles against the IS militants, mainly providing training and advising to the Iraqi forces.