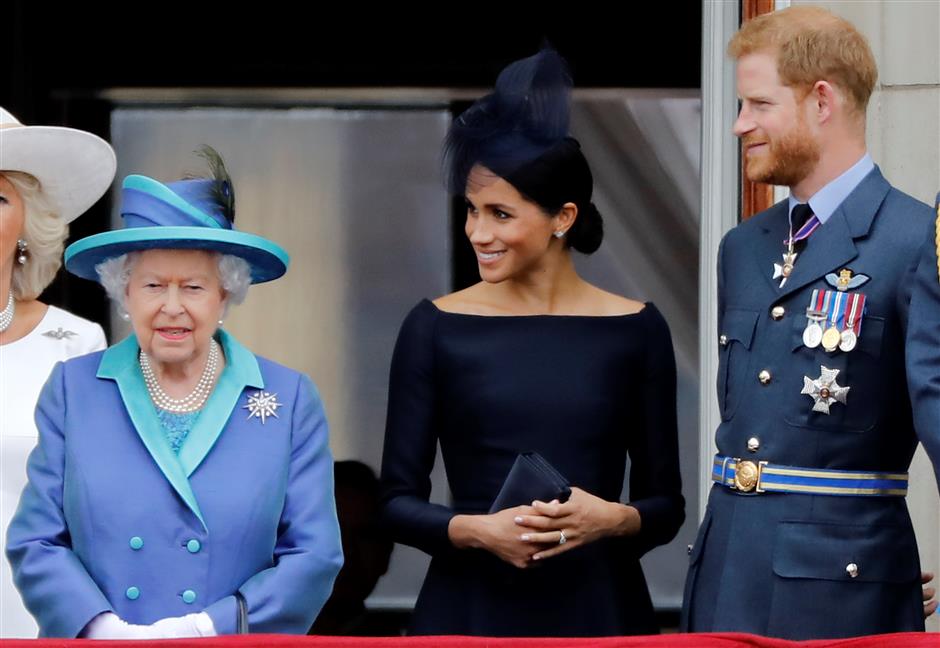 In this file photo taken on July 10, 2018, (from left to right) Britain's Queen Elizabeth II, Meghan, Duchess of Sussex, Britain's Prince Harry, Duke of Sussex, stand on the balcony of Buckingham Palace in London to watch a military fly-past to mark the centenary of the Royal Air Force.

Queen Elizabeth II on Monday allowed her grandson Prince Harry and his wife Meghan to split their time between Canada and Britain during a "transition period" in which the family will figure out how to deal with their shock resignation from front-line royal duties.

The monarch said she held "very constructive" talks between Harry and his older brother Prince William and their father Prince Charles aimed at charting a course through the fallout of the bombshell announcement.

Meghan reportedly joined the conversation by phone from Canada after abruptly jetting out of Britain last week.

Their effective resignation on Wednesday followed a year filled with rumors of infighting between the brothers and reports of Meghan — a biracial American actress with a strong social media presence — feeling unwelcome in the highly traditional and structured royal family.

"My family and I are entirely supportive of Harry and Meghan’s desire to create a new life as a young family," the 93-year-old queen said in a statement after the first day of meetings at her Sandringham estate in eastern England.

Harry and Meghan said they wanted to "carve out a progressive new role within this institution" — a statement that some read as a slight at the way the royal family has been run under Britain's beloved monarch.

The queen frankly admitted that Harry and Meghan's decision was not welcome news.

"Although we would have preferred them to remain full-time working members of the royal family, we respect and understand their wish to live a more independent life as a family while remaining a valued part of my family," she said.

The monarch stressed the couple told her "they do not want to be reliant on public funds" but did not address the issue of whether they would keep their royal titles.

Harry and Meghan are formally known as the Duke and Duchess of Sussex. Five percent of their income comes from public funds.

The rest comes from Prince Charles' Duchy of Cornwall heredity private estate. It dates back to 1337 and has officially reported assets worth 1.1 billion pounds (US$1.4 billion).

The queen said there were still "complex matters" for the family to trash out.

"It has therefore been agreed that there will be a period of transition in which the Sussexes will spend time in Canada and the UK," she said.

The Daily Mail tabloid said Charles was furious at Harry for making the announcement without winning the queen's consent and had left the meeting early.

A YouGov poll suggested 46 percent of respondents supported their decision.

Yet 57 percent also thought they treated the queen unfairly.

Harry and William put up a rare united front as the talks began by issuing a joint statement denouncing a report in The Times that claimed the couple felt "pushed away from the royal family" by William's "bullying attitude."

William and Harry formed a close bond following their mother Diana's death in Paris car crash in 1997. But Harry admitted last month they had drifted apart and were now on different paths.

"For brothers who care so deeply about the issues surrounding mental health, the use of inflammatory language in this way is offensive and potentially harmful," they said in their joint statement.

Harry has been open about his mental health issues in coming to terms with his mother's death when he was just 12.

The couple admitted in October to struggling with the spotlight following their wedding at Windsor Castle in May 2018 and their son Archie's birth 12 months later.

Meghan likes to vacation in Canada and is currently there with Archie.

But the Daily Mail said "her real dream" was to settle alongside other celebrities in Los Angeles — "but not while President Donald Trump is in charge," it added.

Their official plan is to continue to "fully support" the queen and honor their duties to the Commonwealth and their patronages.

But they want to make 2020 a transition year to carve out their new role and launch their new Sussex Royal charitable entity and seek to raise their own sources of income.

They also want to keep their newly renovated Frogmore Cottage home on the queen's Windsor Castle estate as their British base.

Some royal commentators said it was in everyone's interests to quickly settle what was fast becoming an existential crisis that questioned the monarchy's place in the modern world.

The family is "falling apart and should try to put itself back together," The Evening Standard newspaper wrote.

The Sussexes need to accept they have "caused a lot of upset" while the others must understand that the pair are "deeply unhappy with the role cast for them as minor royals hanging on the purse-strings of their relatives."