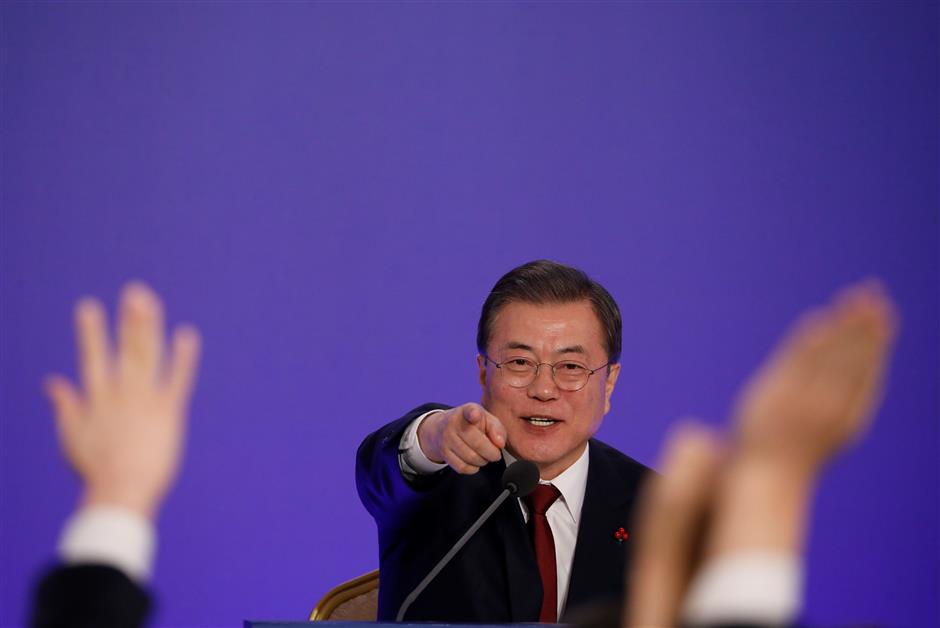 A broader inter-Korean cooperation will help promote dialogue between the Democratic People's Republic of Korea and the United States and win the international support for sanctions relief toward Pyongyang, South Korean President Moon Jae-in said on Tuesday.

Moon made the remarks in his televised New Year's press conference at the presidential complex Blue House, saying the inter-Korean cooperation should be expanded as much as it can, instead of looking at the progress in the DPRK-US dialogue alone.

He said an enhanced inter-Korean cooperation will also help gain the international support for the "exemption of a part of sanctions" against the DPRK or the recognition of "exceptional measures."

Moon said that if it is necessary to win an exceptional approval from the UN Security Council over sanctions against the DPRK, he had willingness to make efforts for it during the process of inter-Korean cooperation.

Although Moon acknowledged the limitation on inter-Korean cooperation because of international sanctions, he said there was sufficient room where the two Koreas can seek cooperation and exchanges.

He said that though the inter-Korean relations were faced with difficulties because of the stalled DPRK-US dialogue, efforts were being made to expand inter-Korean cooperation through dialogue.

The president said his government was optimistic that things would go well sufficiently.

Moon's comments came a week after he said in his New Year address that his government would seek "realistic" ways for the broader inter-Korean cooperation while continuing efforts for the success of the DPRK-US denuclearization negotiations.

The president offered the DPRK concerted efforts to create conditions for top DPRK leader Kim Jong Un's reciprocal visit to South Korea, reaffirming his commitment to the resumption of the currently halted inter-Korean cooperation projects and the reconnection of railways and roads across the inter-Korean border.

Moon has advocated a virtuous cycle of the improved inter-Korean relations leading to creating conditions favorable to the DPRK-US denuclearization talks.

Regarding the deadlocked DPRK-US dialogue, Moon said that although both the DPRK and the United States agreed to a principle of the Korean Peninsula's denuclearization in return for corresponding measures, the two sides showed difference over with what concrete measures to reach that goal.

Moon noted that even if the DPRK-US dialogue did not break down, it was true that the dialogue was in a deadlock, saying the prolonged stalemate was not desirable as it can set back the talks.

He said that both the inter-Korean and the DPRK-US dialogues could not be seen as entering a pessimistic stage although he was not currently too optimistic about it.

Referring to US President Donald Trump's birthday congratulatory message to the DPRK leader, Moon said sending the message itself was "very positive," noting that a dialogue message was sent by Washington through the birthday message, to which the DPRK immediately announced its response.

Kim Kye Gwan, an adviser to the DPRK's Foreign Ministry, said in a statement on Saturday that dialogue with the United States can resume only when Washington fully accepts Pyongyang's demands.

Regarding the DPRK response, Moon noted that though the DPRK said it would resume talks with the United States only when Washington accepts its demands, Pyongyang made it clear that it will not close a door to dialogue.

Moon emphasized the continued trust between the leaders of the DPRK and the United States, adding that efforts for dialogue were being made between Pyongyang and Washington.