US airliner bound for Shanghai dumps fuel on kids 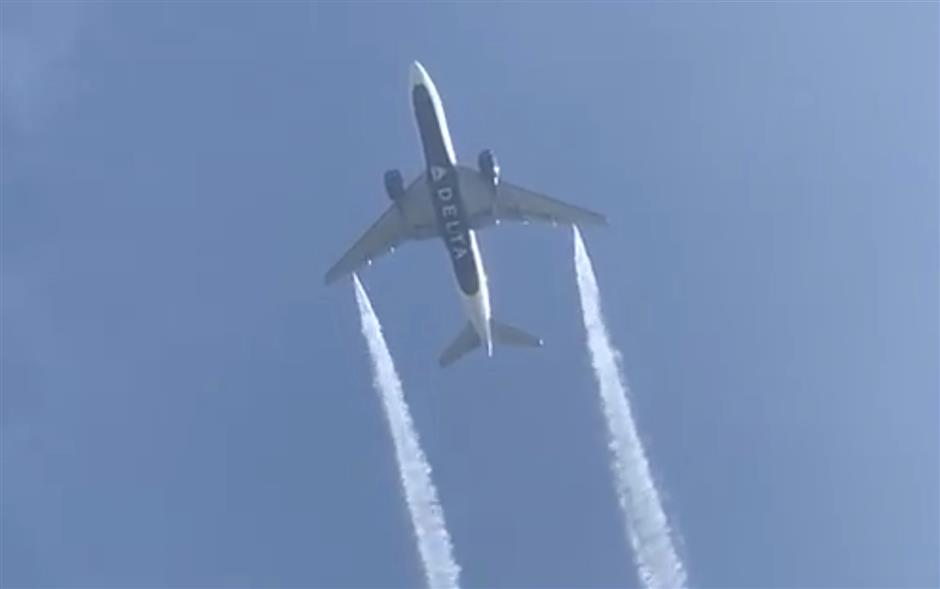 A Delta Airlines, Flight 89, Boeing 777-200 jet empties its fuel tanks as it makes an emergency landing at Los Angeles International Airport, seen from Ocean View Elementary School in Whittier, California, US, on January 14, 2020.

An airliner with engine trouble bound for Shanghai dumped jet fuel that fell as a smelly mist on dozens of schoolchildren while the plane made an emergency return to Los Angeles International Airport, officials said.

The vapor, caused minor skin and lung irritation to 56 children and adults but nobody was taken to hospital and the only decontamination required was soap and water, officials said.

“Delta 89, heavy, we have engine compressor stalls on the right engine,” the pilot reported to air traffic control.

A stall, which can be caused by damage to a turbine, either from a malfunction or sometimes by a bird striking the engine, reduces the engine thrust.

The pilot was asked whether he wanted to keep the aircraft over the ocean to dump fuel but declined, although it appears he may have changed his mind later about whether the plane could safely land weighing as much as it did.

The fuel sprayed out of the plane in two lines and descended at midday in the city of Cudahy and nearby parts of Los Angeles County, about 21 kilometers east of the airport.

The mist fell on five elementary schools, but all injuries were minor and there weren’t any evacuations, Los Angeles County Fire Department Inspector Sky Cornell said.

All the fuel evaporated very quickly and nothing flammable remained in the air or on the ground, he said. Diego Martinez, a sixth-grader at Park Avenue Elementary in Cuday, said he and his classmates were outside for physical education class when they saw the airplane flying low overhead.

Shortly afterward, the air filled with the pungent odor of fuel. “It was very strong, the odor,” the 12-year-old said.

Diego wasn’t doused but some of his friends complained that their skin was itching.

Desperate to take a shower

Some teachers at Park Avenue had headaches from the smell, said Antonio Buenabad, area representative for the United Teachers Los Angeles union.

“They were anxious to get home and shower because the stench was very strong,” he said of the teachers.

Delta Air Lines said the aircraft landed safely after releasing fuel, “which was required as part of normal procedure to reach a safe landing weight.”

The FlightAware website’s flight track showed the jet took off over the ocean and made an immediate right turn toward land and circled back over Southern California to approach the airport from the east.

The Federal Aviation Administration said it is investigating.

“There are special fuel-dumping procedures for aircraft operating into and out of any major US airport,” the FAA said in a statement.

“These procedures call for fuel to be dumped over designated unpopulated areas, typically at higher altitudes so the fuel atomizes and disperses before it reaches the ground.”

However, pilots can deviate from the rules in an emergency for safety reasons, said Doug Moss, a retired airline captain and owner of AeroPacific Consulting, LLC, an aviation consulting firm based in Reno, Nevada.

The pilot could have stayed over the ocean to dump his fuel but that could have taken a half-hour up to an hour, Moss said.