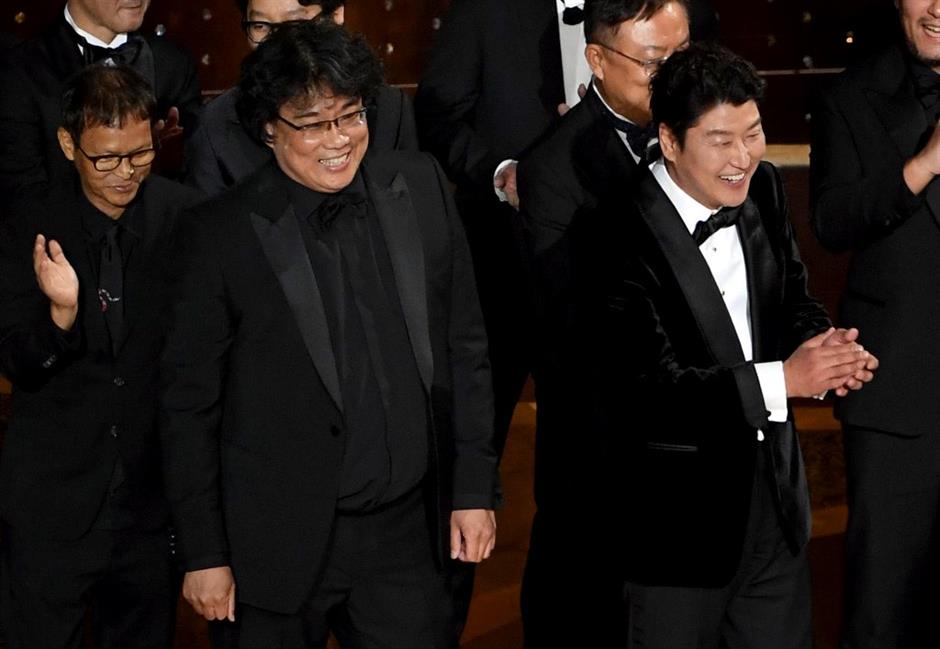 Movie history was made at the Oscars Sunday as South Korea's black comedy "Parasite" became the first non-English-language film to win the best picture award, Hollywood's biggest prize of all.

"Parasite," about a poor South Korean family infiltrating a wealthy household, won a total of four awards, defying the received wisdom that the Academy would overlook a subtitled Asian movie.

"I thought I was done for the day and ready to relax," filmmaker Bong Joon-ho said upon winning best director honors, before promising to "drink until next morning."

But a bigger shock was in store as the movie beat frontrunner "1917" to win best picture.

"It feels like a very opportune moment in history is happening right now," producer Kwak Sin-ae told an audience of Tinseltown A-listers, who cheered the film's wins throughout the night at the Dolby Theatre.

"We never write to represent our countries," Bong said earlier in the night when he took the screenplay award. "But this is (the) very first Oscar to South Korea. Thank you."

Bong also paid tribute to his childhood hero and fellow nominee Martin Scorsese, drawing a standing ovation for the veteran director of "The Irishman."

Joaquin Phoenix won his first Oscar for his turn in supervillain origin story "Joker," the film that started the night with the most nominations.

In an emotionally charged speech, the actor railed against injustice and "an egocentric worldview" that leads to environmental destruction, before paying tribute to his actor brother River, who died of a drug overdose in 1993.

"I have been a scoundrel in my life," admitted Phoenix, thanking Hollywood for not "canceling" him out and urging others to show similar forgiveness.

Renee Zellweger sealed a remarkable comeback after six years away from the screen by winning best actress for "Judy," dedicating the award to Hollywood screen legend Judy Garland.

"Judy Garland did not receive this honor in her time. I am certain that this moment is an extension of the celebration of her legacy," she said in accepting her second Oscar.

Pitt, who claimed his first acting Academy Award for his supporting turn in Quentin Tarantino's "Once Upon a Time... in Hollywood," was one of several winners to strike a political note.

"They told me I only have 45 seconds up here, which is 45 seconds more than the Senate gave John Bolton this week," he said, referring to President Donald Trump's recent impeachment trial.

Barack Obama tweeted his praise for "a complex, moving story about the very human consequences of wrenching economic change."

Taika Waititi, who is of Maori origin, said he hoped the win would inspire "all the indigenous kids in the world who want to do art and dance and write stories."

Record Grammy-winning singer Billie Eilish sang a moving version of "Yesterday" to accompany the "in memoriam" montage for those Hollywood lost this year, which opened with Bryant and closed with Douglas.

Music was a prominent theme throughout the night, which began with a medley addressing a swirling row over the lack of minorities and female directors on the star-studded nominee list.

"We celebrate all the women who directed phenomenal films and I'm so proud to stand here as a black, queer artist," singer Janelle Monae said.

"To the girls, to the women, to the mothers, to the daughters, who hear the music bubbling within, please speak up," she said. "We need to hear your voices."

No female directors were nominated this year -- a theme referred to by several celebrities.

Natalie Portman, a best actress Oscar winner in 2011 for "Black Swan," literally wore her feelings -- she had their names stitched into the Dior cape she wore to the gala.

The ceremony had no host for a second consecutive time, after last year's batch of bright guest presenters caused a trend-bucking uplift in TV ratings.