Sanders wins in New Hampshire as Biden crashes and burns 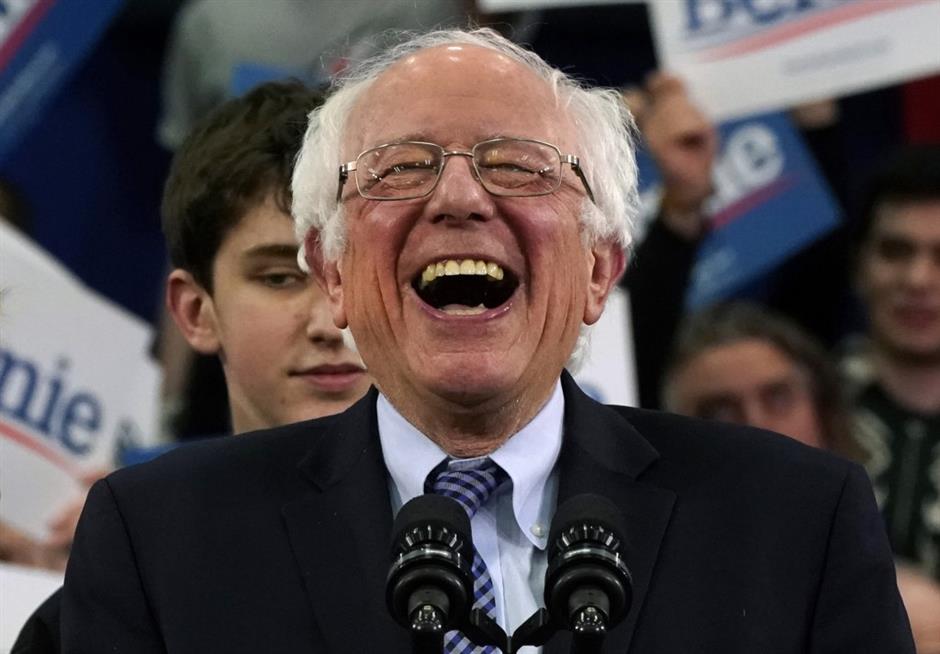 Bernie Sanders won New Hampshire's high-stakes Democratic primary on Tuesday, according to US network projections, leaving rivals including party stalwart Joe Biden in his wake as he staked his claim to challenge President Donald Trump in November.

Sanders, the flag-bearer for the party's progressive wing, had 26 percent of votes with most of the count complete in the northeastern state, where he routed Hillary Clinton in 2016.

"Let me take this opportunity to thank the people of New Hampshire for a great victory tonight," Sanders told cheering supporters after NBC and ABC called the result in his favor.

"This victory here is the beginning of the end for Donald Trump," the senator from neighboring Vermont added as he raised the roof with his rallying cry for fairer taxes and health care reform.

Indiana ex-mayor Pete Buttigieg finished in second place at 24 percent as he readied for the more difficult battlegrounds ahead.

"Now our campaign moves on to Nevada, to South Carolina, to communities across our country. And we will welcome new allies to our movement at every step," he said.

Midwestern moderate Amy Klobuchar maintained a late surge to place third on about 20 percent, while liberal Elizabeth Warren finished in fourth at about 9 percent.

After months atop the pack, Biden had already conceded he expected to do badly in New Hampshire, as he did a week earlier in Iowa — and the former vice president's worst fears were beginning to materialize as he languished in fifth with just over 8 percent.

The performance will be a body blow to the 77-year-old Biden, who has failed to generate the fundraising numbers or the enthusiasm levels of his rivals for the top spot on the Democratic ticket.

White House hopefuls had been seeking clarity in the Granite State after the first-in-the-nation Iowa count devolved into chaos, with Sanders and Buttigieg eventually emerging neck-and-neck.

For tech entrepreneur Andrew Yang and Colorado Senator Michael Bennet, that meant facing reality and bowing out after they failed to make an impact on Tuesday.

"You know I am the math guy, and it is clear tonight from the numbers that we are not going to win this race," Yang said.

'Not the closing bell'

The 78-year-old Sanders went into the race as the newly anointed national frontrunner and was expected to win New Hampshire.

Buttigieg's camp will be happy with a solid result that could provide voters on the fence with much-needed reassurance after he won narrowly in Iowa.

The Afghanistan veteran is languishing at 10 percent in the latest national polls and has negligible support among African-Americans in upcoming states with more diverse populations.

Pundits believe this vital constituency will start to take a serious look at Buttigieg, a virtual unknown a year ago, after his impressive top-two finishes in the opening races.

Warren admitted to MSNBC the result was a disappointment but insisted: "This is going to be a long primary process."

"The question for us Democrats is whether it will be a long, bitter rehash of the same old divides in our party, or whether we can find another way," she said later.

Biden, apparently seeing the writing on the wall, canceled a primary-night party and was in South Carolina as the results came in.

"Now, where I come from, that's the opening bell — not the closing bell."

The day had begun under a light snowfall. Voters at a Boys and Girls Club in the state capital Concord received paper ballots and used either voting booths curtained by red, white and blue plastic or tabletop voting spots to make their choice.

Mike Schowalter, a 39-year-old conservative, said he voted for Sanders, a self-declared democratic socialist who critics complain is proposing a health care overhaul and other sweeping ideas that are too expensive.

"It does seem kind of strange, but I do think a lot of stuff going on in our country right now is a bit broken," Schowalter told AFP. "I think he'll get us talking."

Buoyed by his strong start, Sanders has emerged as the national Democratic frontrunner with 25 percent support, according to a new Quinnipiac University poll that described his surge as a "dramatic shift."

Biden has skidded from 26 to 17 percent support since the end of January.

Competing for the support defecting from Biden, Bloomberg is focusing on Super Tuesday on March 3, when 14 states vote — spending a record US$260 million of his personal fortune on his campaign.