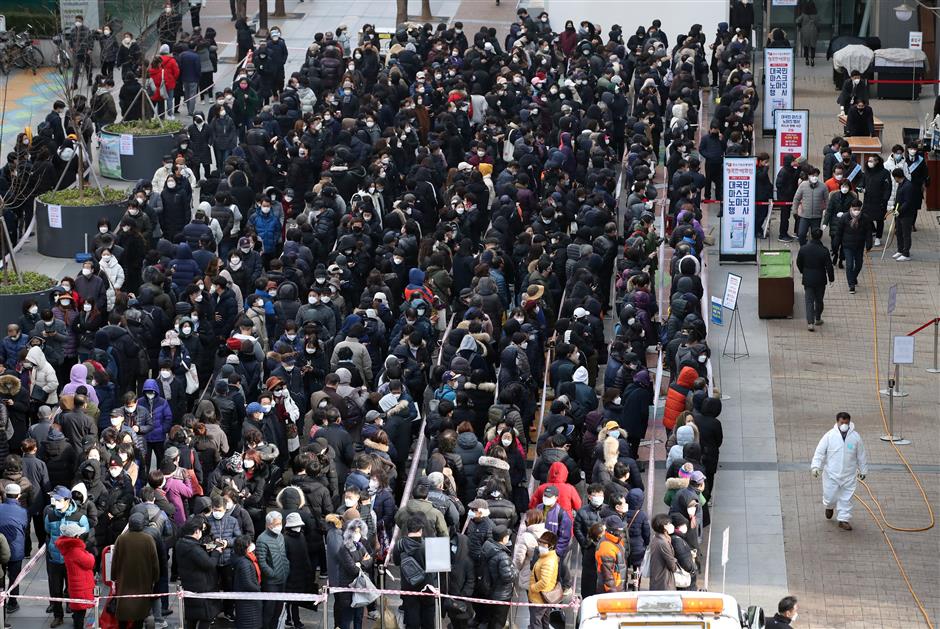 People wait in line to buy face masks outside a department store in Seoul on March 3, 2020.

South Korea confirmed 477 more cases of the COVID-19 on Tuesday, raising the total number of infections to 4,812.

As of midnight local time, the number of infected patients totaled 4,812, up 477 from the previous announcement. Three more deaths were reported, lifting the combined death toll to 29.

The Korea Centers for Disease Control and Prevention has updated the data twice a day at 10am and 5pm local time.

The virus infection soared for the past 13 days, with 4,304 new cases reported from February 19 to March 2. The country has raised its four-tier virus alert to the highest "red" level.

The total number of infections in Daegu, about 300 km southeast of the capital Seoul, and its surrounding North Gyeongsang province increased to 3,600 and 685 respectively.

Daegu became the epicenter of the viral spread here as the biggest cluster of mass infections was found in the city with a 2.4 million population.

The Daegu cluster was closely linked to the church services of a homegrown minor religious sect, called Sincheonji, in Daegu. As of Monday morning, 2,418 cases, or nearly 60 percent of the total, were tied to the worship services.

A total of 119 cases were traced to Daenam Hospital in Cheongdo county, just south of Daegu. Test for all of about 650 patients and medical staff was completed as almost all of the patients at the hospital's psychiatric ward tested positive for the virus.

The cluster infection at the hospital was believed to have been linked to the Sincheonji sect as a number of followers attended a funeral ceremony for a brother of the Sincehonji founder.

The government has designated Daegu and Cheongdo as a "special care zone."

One more patient was discharged from quarantine after making full recovery, raising the combined number to 34.