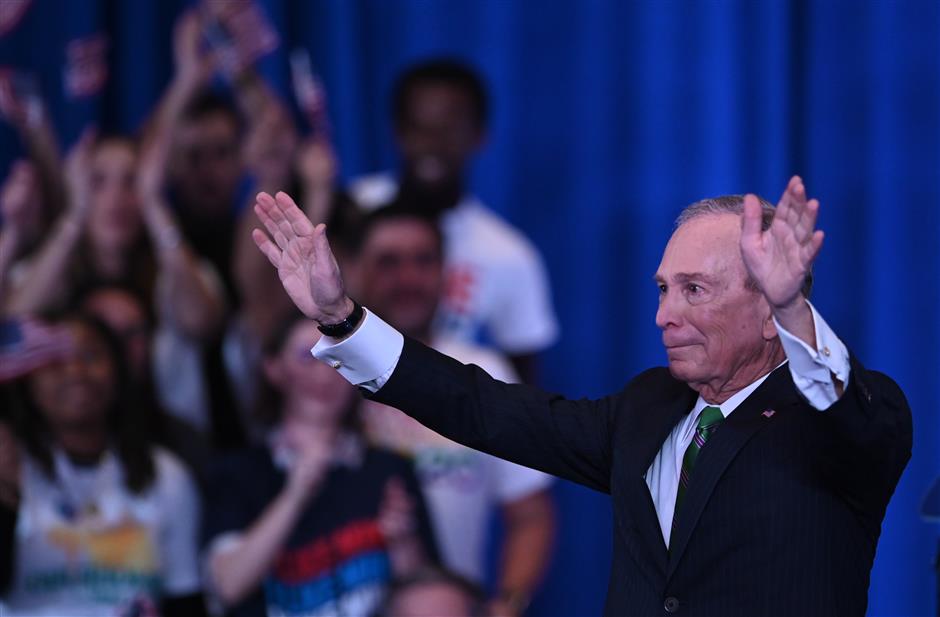 US media tycoon Michael Bloomberg quit the Democratic presidential race and endorsed frontrunner Joe Biden on Wednesday, after blowing more than half a billion dollars on a gamble that failed to inspire voters.

The billionaire had bet his White House run on Super Tuesday but failed to win any of the 14 states up for grabs on the most important day in the primary season.

A lack of charisma, limping debate performances, controversy over "stop and frisk" policies when he was New York mayor, and allegations he tried to buy the ticket were seen as having conspired to tank his candidacy before it ever got off the ground.

Inescapably, his poor showing left him facing mounting pressure to clear the way for fellow moderate Biden, who emerged as the newly resurgent frontrunner following a string of victories on Tuesday.

On Wednesday morning, Bloomberg took the cue and bowed out. He later thanked his supporters and 2,000 campaign staff, fighting back tears at one point.

"I entered the race for president to defeat Donald Trump, and today I am leaving the race for the same reason because staying in would make it more difficult to achieve that goal," he said.

"After yesterday's results, the delegate math had become virtually impossible, and a viable path to the nomination just no longer existed.

"Defeating Donald Trump starts with uniting behind the candidate with the best shot to do it, and after yesterday's vote, it is clear that candidate is my friend and great American Joe Biden," he added.

Trump himself had a typically scathing appraisal of the performance by his rival New Yorker, who will now be throwing potentially bottomless funding behind Biden.

"This has been the worst, and most embarrassing, experience of his life," tweeted the president, who mercilessly attacked Bloomberg during his short-lived campaign, belittling him with the nickname "Mini Mike."

"I could have told him long ago that he didn't have what it takes, and he would have saved himself a billion dollars, the real cost," Trump said in another post.

"Now he will pour money into Sleepy Joe's campaign, hoping to save face. It won't work!"

Bloomberg was snubbed by voters despite one of the most expensive presidential runs in US electoral history, including an advertising blitz that dominated TV networks, news websites and social media sites.

The 78-year-old gambled on Super Tuesday after deciding to skip the first four voting states, but all he picked up was a consolation victory in American Samoa, a territory in the Pacific.

Bloomberg, who only entered the race in November, spent millions of dollars per delegate that he won.

"He bet that his immense wealth would in essence buy him the nomination and he was wrong," Baruch College professor Doug Muzzio told AFP.

His ads were still running on major television networks after his announcement that he was dropping out.

Bloomberg had pitched himself as the best centrist candidate to defeat Trump, touting his commitment to fighting climate change and gun control.

But he was forced on the defensive over accusations he had made inappropriate comments to women at his company.

Voters also punished him for poor performances on the stump and on live debates performances in Nevada and South Carolina.

When it came down to it, the billionaire candidate "did not connect with people," said Muzzio.

"Mike Bloomberg is dull, boring, technocratic and uninspiring," he summed up.

"Stop and frisk," which Bloomberg oversaw when he was New York mayor and defended until late last year, also hampered his appeal among African-Americans and Latino voters.

"It dovetailed with another narrative criticism of Bloomberg that he governed New York with the interests of the wealthy in mind, and never really understood what it might be like to be a person of color."